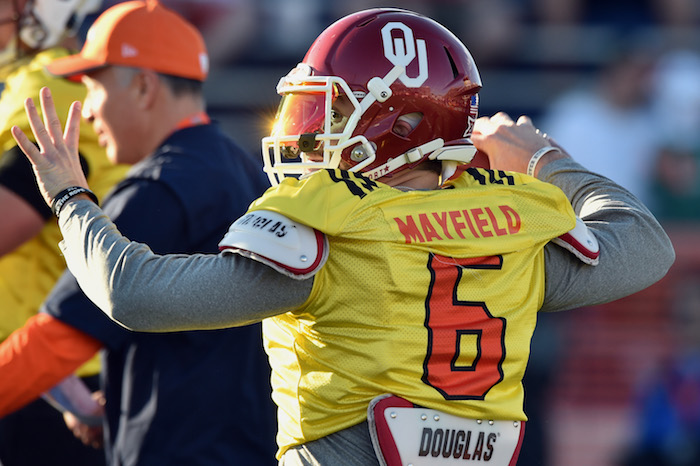 Baker Mayfield showed up late to the Senior Bowl on Tuesday for measurements and practice. Right away, the assumptions of a prima donna player showing up behind schedule ran rampant. But of course, it was folks jumping to conclusions. Mayfield confirmed his mother has a health issue and is in the hospital.

The quarterback then went on to address questions about his character and what’s the most important thing for him to show people this week, to which he said:

Mayfield was then asked if those comparisons frustrated him, to which he added:

“It is what it is. If I apid too much attention to it, I’d be focusing too much on the wrong things. I came down here to play the game and to show them that I love playing.”

Baker Mayfield after his first practice at the Reese’s Senior Bowl pic.twitter.com/Z4286cBtEs

First off, I love how Mayfield mispronounced Manziel’s last name. Total disrespect for the clown that has become Johnny Football.

Secondly, Mayfield’s confidence is striking as he shoots down these nonsense comparisons with passion and poise. I think he’s going to blown away NFL personnel people.

And for those wondering, Mayfield checked in at 6′, 5/8”, and hand size at 9.5″. That’s about average hand size for an NFL QB and bigger than his in-state rival Mason Rudolph.

Mayfield did not commit to playing in the game this weekend due to his mother’s illness, simply stating, “we’ll see, we’ll see.”