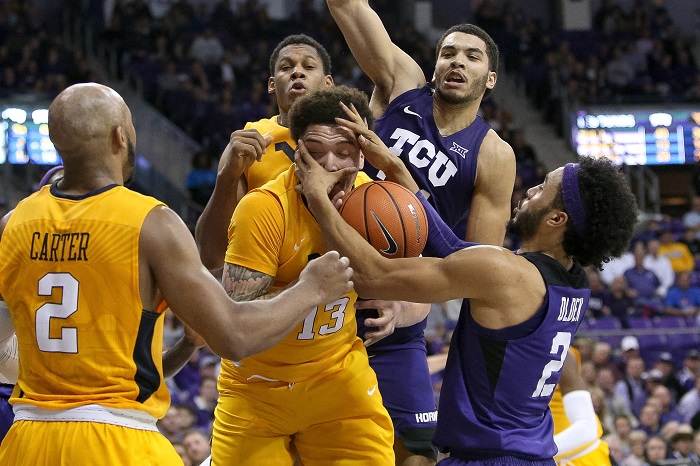 Conference play is in full swing. The stakes continually become higher as the season moves on. The question everyone wants to know: Is my team in the NCAA Tournament if the season ended today?

Many fans already know this answer. The lowest RPI ranking to ever receive an at-large bid to the big dance is No.67 by Southern Cal in 2011. That’s the bar. However, just because you’re in the top 30 for RPI doesn’t mean you’re a lock. Teams have been left out. Resumes have to be built. Is your team racking up all of its wins at home? That’s a deadly recipe.

Big 12 teams do not need to fret over strength of schedule. Post a winning conference record and you are likely in. The next questions are: What seed is my team? Who are we playing? Are we a lock?

Finally, if you know you’re team is not going to the big dance but has a winning record, could they wind up in the NIT? Below, we look at every Big 12 team’s status. It’s not Joe Lunardi’s bracketology. That chump only cares about the field of 68. IT’S BROCKETOLOGY. Is your team getting those extra reps for the next season? Good! You actually have somewhat of a future for your program. In March Madness, anything can happen. Just ask George Mason, who to this day, probably should not have even received the shot to go to the Final Four, but did.

The Lloyd Noble Center has become a really tough place to play this season. Both, Texas Tech and Kansas have fallen off while being the top dog in that building. Despite the loss, Oklahoma had such a crappy week prior to the upset, Kansas is still the top dog. In addition to the coveted automatic bid, the Jayhawks have a 7-1 record away from Phog Allen Fieldhouse. This includes a victory in Morgantown, W. Va. The only thing in their way of a No.1 seed is the Atlantic Coast Conference. Virginia, Duke, North Carolina and Clemson all have a higher RPI. We still have over a month left to play though, so the ACC will beat itself up. In addition, the Big East has seen some interesting results too. Xavier and Villanova are both currently ahead of Kansas. Again, more than a month still to play. A lot can change. What’s even better? Having the chance to knock Texas A&M completely out of the field of 68. The Aggies are living on a prayer right now.

The Sooners were slipping, but a victory over Kansas only drops them down one seed from a week ago. They are still in the top 10 for RPI rankings and have several solid victories against the RPI top 25. They have a weak spot playing true road games, but a 2-3 record isn’t going to hurt all that much.  Now Sooners fans finally get their shot at Alabama. Okay, so it’s a different sport. Who cares. It’s not like the football national championship had any meaning to it anyways. And besides, it will be fun to laugh at the SEC when the Sooners embarrass the Crimson Tide on the road.

The worst part about West Virginia’s resume is its RPI ranking. This team has defeated Virginia. They have a victory over Oklahoma. Add in winning records in both true road victories and neutral site games. With a victory over Kentucky, West Virginia could skyrocket to a 2-seed. Of course, that depends on how other teams in front of them do. Make no mistake about it, they are about as close to a lock in January as a team gets. The insane part about this is somehow they’ve dropped down to a four seed. Again, blame the ACC. That conference has four teams in the RPI top 10 and two more that are in the top 20.

Let’s face it. The NCAA will act like this matchup just fell out of the sky. We all know they are a big bunch of liars, who will do anything for a quick dollar. They know this matchup will score viewers and sell tickets. And quite honestly, it’s the reason Texas A&M is the last at-large team not playing the First Four. The Aggies have an awful resume, and are literally living off their phenomenal November. Texas A&M is 2-6 in conference play. Their only victory against a team in the RPI top 25 came against West Virginia overseas. Meanwhile, Texas Tech isn’t helping its own case. The Red Raiders are 1-3 on the road, and lost to Iowa State. If it weren’t for the victory at Kansas (the only true road victory Tech has), this team might be an 8 or 9 seed.  Basically, it’s a matchup of two teams who peaked in December and fell off a cliff afterwards.

A victory over West Virginia keeps TCU at a 6 seed this week. The Horned Frogs don’t have a daunting schedule, and the teams they’ve played had been overachieving. St. Bonaventure took a loss in the past week. William & Mary dropped three of their last four. Although it took two overtimes on the road in a different time zone, a Mountain West team finally knocked off Nevada. It was a rough week for the TCU strength of schedule. It’s hard to knock down a Big 12 team who has 10 more victories than losses though. TCU plays Vanderbilt Saturday. This isn’t going to help the Horned Frogs strength of schedule at all. Vanderbilt is the lone SEC team with a losing record. If there is one school rooting for the Big 12 in this weekend’s Big 12/SEC Challenge, it’s TCU.

They win one. They lose one. They win one. They lose one. Texas is that team that’s just doing enough. They now host an Ole Miss team that is currently the last team in the National Invitational Tournament. It’s the not the kind of win that will move Texas up to a 9-seed, but it is the kind of win that will keep Texas in the field of 68 with the upcoming schedule afterwards: at Texas Tech, vs. Oklahoma, vs. Kansas State, at TCU. The Longhorn’s bubble is about to do some serious gymnastics.

Wow! One week ago, Kansas State was slated to play a road game in the opening round of the NIT. They have won three straight, four of their previous five and are in contention for the Big 12 Conference Regular Season Championship. They followed up back-to-back victories over RPI Top 20 teams TCU and Oklahoma with a road win against Baylor. This team is on fire, and that is why they are up to No. 54 in the RPI rankings, placing them square on the bubble. After their matchup with Georgia Saturday, the Wildcats host Kansas. Oh boy! There is bound to be pandemonium inside the Octagon of Doom.

Oklahoma State is 0-4 on the road. The upset in Bedlam is the difference between the NIT and the CBI. Quite frankly, without the victory over Oklahoma, this team would be on the bubble for the CBI. One of the Cowboys’ victories comes against a Mississippi Valley State team that is 0-20 this season. That kind of win does more damage to your team than it does to benefit it. Some others come against 300+ RPI teams in Pepperdine, Charlotte and Houston Baptist. Victories against UT Rio Grande Valley, Oral Roberts and Austin Peay aren’t exactly eye-openers to the selection committee either. Pittsburgh certainly isn’t helping the cause either with their 8-13 record only continuing its downhill trend. The Cowboys have a lot more ground to make up, and it starts with gaining their first win on the road.

It’s amazing how we go an entire week of college basketball and wind up with the same exact result for one team. At least Iowa State has some momentum: a two-game home winning streak. Tennessee visits Ames Saturday. West Virginia comes to town Wednesday. Then Iowa State travels to Waco. Going 2-1 in these games will likely boost Iowa State into the NIT. The perks about being this far out of the NCAA Tournament is that a road victory at Baylor can move the needle just as much as a home victory against a team in the RPI top 25.

Baylor didn’t get a great draw in the Big 12/SEC Challenged with a road trip to Gainesville. Following that up with a road trip to the Lloyd Noble Center is a recipe for disaster for a team who has an RPI over 100. We expect Baylor to be completely out of postseason bracketology next week, The bright side: The two games after that are against Iowa State and Oklahoma State. It’s a golden opportunity for Baylor to climb back in.

Joel Lanning: The obvious answer for 2017 Lombardi Award
ESPN sucks up to the Big 12 Conference, but don’t buy it
To Top