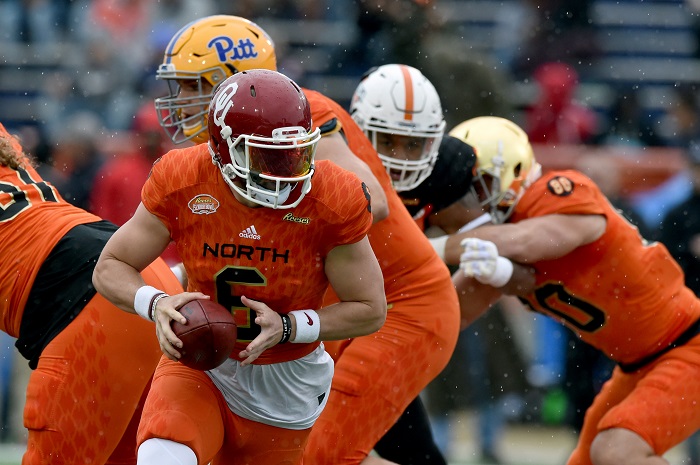 The 2018 Senior Bowl took place on Saturday in Birmingham. Ten Big 12 players participated in the game, with some getting more playing time than others. But here we go with a rundown of each Big 12 player, in no particular order. Best of wishes to each of these guys as they prepare for an NFL future. The South team went on to beat the North team 45-16.

Noteboom had one mistake early when he pulled as the right tackle and got stuck behind the guard. But upon further review, it could have been the guard who screwed up the play (video below). Noteboom did a good job in some one-on-one coverage against OU linebacker Obo Okoronkwo. I thought the tackle had a good day, as he played most of the first quarter.

Re-Watching the #SeniorBowl and #TCU RT Joseph Notebloom. Looks like he pulled and got caught behind the RG who screw up this play. pic.twitter.com/SevC3SxLtX

Mayfield didn’t play much, but started and did show what was needed. On the first play he went under center, which he rarely, if ever, did at OU, got pressure, rolled out and hit the Notre Dame tight end. On the next play, Mayfield hit Jalen Scott from New Mexico State right in the hands on a slant route and Scott just dropped it. On the third play Mayfield was sacked by Marcus Davenport from UTSA, who also knocked down a pass from Mayfield on another drive. Mayfield only got to air it out a couple of times. The first was to his fullback Dmitri Flowers on a wheel route that Mayfield was a little long on, and on the last play of the second drive Mayfield stepped up in the pocket and threw a laser to Penn State TE Mike Gesicki, but due to pressure in the pocket, Mayfield was a half-second late on the throw, but Gesicki was in good coverage anyway. Mayfield only got two drives, which was expected, finishing 3 of 7 for 9 yards, and was relieved by Wyoming QB Josh Allen.

Overall, I don’t think Mayfield hurt himself at all this week or in the game. In fact, I think he helped himself. He had the family emergency with his mother’s health and showed up late, but took all the heat that some folks unfairly directed his way and handled the media insanity with poise and confidence. He was also the first reigning Heisman winner to play in the game since 2006 (Troy Smith). Tim Tebow was there in 2010, but he had won it as an underclassman and was not the reigning winner. In the game, Mayfield showed off his arm strength, he looked comfortable enough in a couple of snaps from under center and his leadership was apparent.

The first-team All-Big 12 linebacker was a non-factor for much of the start of the game. It was pretty cool to see him going up against another Big 12 guy in TCU RT Noteboom, as it’s always good to see a Big 12 vs. Big 12 match up. But Obo did show his pass rushing ability off the edge a couples times in the second quarter. Unfortunately, one of his better rushes ended up in a touchdown for the South team as Kurt Benkert (UVA) was flushed out of the pocket and found Rashad Penny for a 73-yard touchdown. But late in the quarter he burned a Division II tackle for a sack of Benkert, as the linebacker’s speed was just way too much to handle.

The Iowa State wide receiver caught a couple of passes in the flat from Baker Mayfield, but that’s not really where Lazard thrives. He’s a big body, who can go up against smaller cornerbacks and beat them for jump balls. He’s not Danny Amendola, who you just toss it to in the flat and hope for big plays on the outside. He got a lot of playing time, but not many targets, unfortunately.

Big 12 to Big 12. Mayfield to Allen Lazard. Not much gain here but I don’t think this is the best way to utilize Lazard. #SeniorBowl pic.twitter.com/mdbLQYetWf

Washington didn’t have any catches on the afternoon. One of his targets in the corner of the end zone resulted in an interception. But as you’ll see in the play below, this is NOT how you utilize Washington. That play is better suited for his teammate, Marcell Ateman, or even the aforementioned Allen Lazard. Washington is not that 6’4” WR who you throw up a jump ball for in the corner of the end zone. Washington had another target late in the second quarter, but Benkert’s throw was at his feet.

Yea this is not how you use James Washington either. This play better suited for Marcell Ateman. #seniorbowl pic.twitter.com/9WPXUE7UB1

Washington’s teammate, Ateman, didn’t see much action either. He was no where to be found for most of the game, but he did have a nice 14-yard touchdown grab for the final score of the game early in the fourth quarter. That’s where Ateman thrives in the red zone and he was able to angle his big body on a slant route for the score.

Flowers received one attempt from Mayfield on a wheel route, something they ran a ton of at OU, but Mayfield overshot Flowers by a couple of steps. He also got a carry in the second quarter for six yards, showing off his leg strength and pushing the pile ahead for a couple of extra yards more than most would have gotten. Additionally, Flowers showed off his blocking ability.

Ford was consistently drawing double teams from the interior of the line. One play stood out late in the first quarter when he got good push on a double team, spun out of it and chased down Wyoming QB Josh Allen out of bounds, cutting his gain short by a few yards. He had other moments showing great gap defense and disrupting the offensive line, even when he drew double teams. Ford also blasted through the line in the third quarter to sack Josh Allen. He played a ton in this game, getting several snaps in the first and second half.

I saw White on the field for spurts in the first half, but didn’t see much of him at all in the second half. Considering how badly the North Team’s secondary got burnt at times, White should’ve gotten more run, as he couldn’t have done any worse (and likely would’ve done much better) than the guys who were actually playing.

And not to be forgotten, Pringle had a catch for nine yards on one of the last drives of the game on a completion from Troy QB Brandon Silvers. Pringle did not see much time at all, but made a nice grab on a ball that was thrown slightly behind him. For the action that he saw, Pringle did as much as he could have done.

ESPN sucks up to the Big 12 Conference, but don’t buy it
Iowa State DL Kamilo Tongamoa arrested for drunken driving
To Top