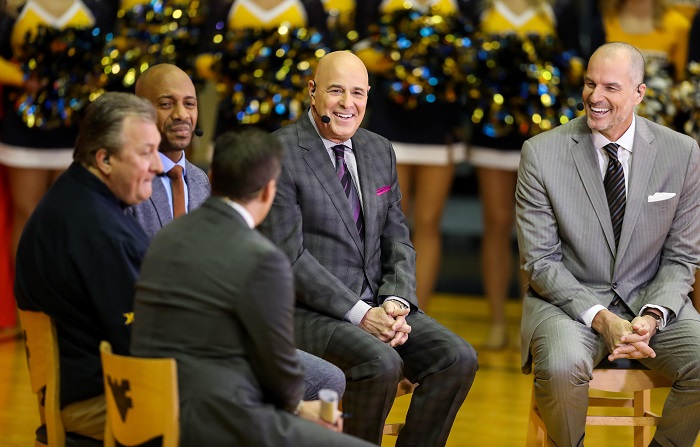 ESPN is sending the basketball version of College GameDay to a Big 12 school for the second consecutive week. But underneath the surface, it’s more deceiving than a Larry Nassar medical treatment.

Is a tide in the Big 12’s coverage starting to turn? Are they becoming the more journalistic entity they once were back in SportsCenter’s golden age of the 1990s? After multiple massive layoffs in 2017 and chords continually being cut, many will fall for this trick. “Hey, they’re starting to realize the Big 12 Conference is really good at sports.”

The reality is: ESPN believes everyone west of the Mississippi River was born last night. It’s no coincidence that College GameDay visited West Virginia when an unranked Kentucky team came to town. The folks in Bristol are trying to trick Big 12 fans into believing they are starting to turn a corner. I’m not buying it and neither should you.

It was the second consecutive week College GameDay covered Kentucky. The SEC has one team in the RPI Top 10: Auburn. The Big 12 Conference entered Saturday with two: Kansas and Oklahoma. Two more Big 12 Conference teams have higher RPI rankings than West Virginia: TCU and Texas Tech. The visiting team during their first College GameDay of this season was an unranked Florida team. Are you telling me there wasn’t a better matchup that week? I can certainly think of one. The Big East had Xavier at Seton Hall. Of course, ESPN is going to alienate that game because FS1 holds the rights to the Big East’s games. Let’s not forget that ESPN has played its hand heavily into conference realignment, and tried to force its hand. It succeeded in killing football in the Big East Conference. Add in the fact that its dream of four 16-team superconferences would virtually kill the Big 12 Conference. The Big East saw ESPN’s destruction first hand and that’s why ESPN didn’t go to that game.

They could’ve also gone to Wichita State at Houston, but ESPN hates how the American Athletic Conference is considering itself as a “Power 6” conference. Not to mention UCF embarrassed the College Football Playoff when it beat Auburn in the Peach Bowl to become this year’s only undefeated team (and National Champions). Auburn defeated both of the team’s in that phony game ESPN promoted as a “National Championship”. Just minutes prior to the airing of Georgia vs. Alabama, UCF ended its second national championship parade.

This is all political.

Don’t get me wrong, the publicity certainly helped promote West Virginia. That’s terrific. However, Virginia at Duke should’ve been chosen this week. ESPN doesn’t need to promote ACC basketball. It’s already a good product. What they need to do is continue shoving the SEC down our throats. That’s why they chose to send a crew to West Virginia: in the case that an unranked Kentucky team upsets the Mountaineers, it would be great for the SEC Network.

Next week they will choose to go to Texas for a Big 12 Conference game. Guess what? The Longhorn Network is run by ESPN. Texas is not ranked. Oklahoma has lost three of its last four games. The Sooners have a losing road record and just lost to an SEC team. Meanwhile, West Virginia will be at home again. They will be hosting a Kansas State team on fire. This is the best matchup next week, but it doesn’t feature a team ESPN cares to promote. If it weren’t for the Big 12/SEC Challenge, it’s safe to say West Virginia never would have hosted College GameDay this season. Prior to this week, the Mountaineers hosted College GameDay one other time. It came in 2009 when they were still in the Big East Conference.

Don’t believe the hype folks. Until ESPN pays a visit to Manhattan, Waco or Lubbock, (Note: Waco was visited prior to the creation of the SEC Network in 2011) they’re playing you to be a fool. They don’t care about the Big 12 Conference. They care about the SEC Network and the Longhorn Network. Zero Big 12 teams were featured on College GameDay in 2017. Only one Big 12 Conference game has played host in the past two seasons: No.6 Kansas at No.3 Oklahoma on February 13, 2016.

If ESPN wants Big 12 eyeballs, they need to try a little harder.