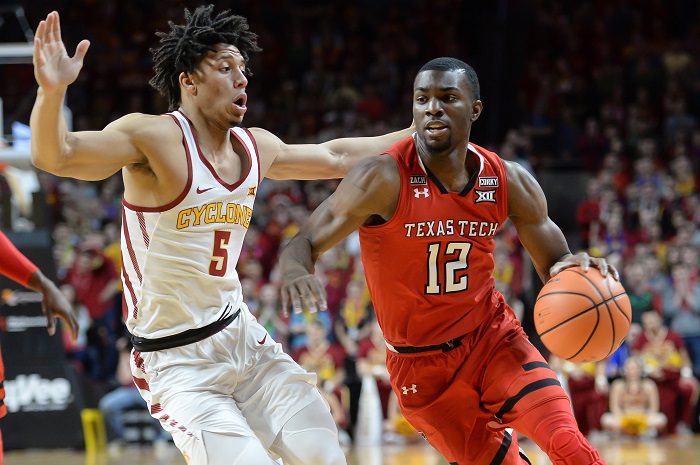 By popular demand, it’s time to bring back the Power Rankings. We did them throughout the entire football season as our staff voted and then we averaged each contributor’s rankings out to come up with our official rankings one through ten. Well, there’s still plenty of time left to get going with hoops, as we’re still less than one month into conference play, so here we go.

The Jayhawks find themselves atop the Big 12 standings, again, but they’re only one game up on four teams in the conference standings. KU beat Texas A&M in the Big 12 – SEC Challenge on Saturday, and has won six of their past seven games, with the only loss coming this past Tuesday against Oklahoma. A huge showdown looms on Big Monday as the Jayhawks go to Manhattan with first place on the line in the Big 12.

There was discrepancy from the two to four spots in this week’s rankings, and understandably so. But it’s the Red Raiders who slip ahead for the #2 spot. Tech is one of those four teams one game back of the Jayhawks. Without Zach Smith, the Red Raiders are holding their own, going 3-3, including two-straight wins over Oklahoma State and South Carolina. The road win over the Gamecocks was impressive as they had to come from behind late on the road. Keenan Evans stepped to the plate with a combined 57 points in the two wins. Tech plays their in-state foes this week with Texas and TCU on deck.

The Wildcats are arguably the hottest team in the Big 12 conference, winning four straight and five of six games. The reason why? Dean Wade. He’s blossoming into that first-team All-Big 12 player on a consistent basis. That’s the key for Wade, consistency. And coming up is the kind of week that we will learn whether or not K-State is contenders or pretenders in the Big 12. The Wildcats host Kansas on Big Monday and then play at West Virginia on Saturday. Brutal week.

The Mountaineers are right in the thick of the standings in a four-way tie for second place at 5-3 in conference play, but the Mountaineers blew another big lead to an inexperienced, but talented, Kentucky team on Saturday night. That makes in four losses in five games for the Mountaineers, who have fallen off since their No. 2 ranking. To make matters worse, in three of those four losses, WVU had a double-digit lead in the second half. Even though they get Iowa State this week, playing in Ames is never easy, and then it’s hosting K-State Saturday.

The Sooners picked up a huge win over Kansas on Tuesday, which put the top of the Big 12 back into play for nearly half the conference, including OU. But the Sooners then went out and lost to Alabama on the road Saturday, in a game where the Alabama defense did a great job not letting Trae Young get the ball, by face guarding him with their long guards. Young finished with 17 points, his lowest point total this season since the opener against Omaha back on November 12th. So, the Sooners have now dropped three of their past four games, but get a match up at home against a struggling Baylor team mid-week, before going to Texas on Saturday.

Speaking of the Longhorns, here they are at the No. 6 spot. The Longhorns have quietly put together some of the better hoops in the Big 12 over the past two weeks, winning three of four, but their win over Texas Tech was followed up by an ugly 35-point loss to West Virginia. Over this four-game stretch, Mo Bamba is averaging 18 points, 13 rebounds and four blocks, as the freshman looks more like a one-and-done player with each passing night. Texas has to deal with a road game in Lubbock this week, followed by the Sooners on Saturday, which includes that College GameDay circus. At 4-4 in Big 12 play, it’s an interesting time for the Longhorns.

The Horned Frogs have hit the skids, losing five of their past seven games, but one of its wins is by nine points over West Virginia at home. TCU can score, 6th in the nation with 86.8 points per game, but the defense is as bad as the offense is good, allowing 77.5 per game, good for 302nd in the country. However, the losses have all been close. Here’s a closer look: For TCU’s five losses in seven games, they are by a combined 18 points. TCU is still in fine position to make the NCAA Tournament and Alex Robinson has handled the point guard spot well in place of the injured Jaylen Fisher. Robinson has scored double digits in his past three games with a total of 24 assists. This week for the Horned Frogs they’ll take on Oklahoma State in Stillwater and Texas Tech at home.

The Cowboys have lost three of their past four games. Their past two losses have been tough ones to swallow. The Pokes led Texas Tech by 12 points at halftime and ended up losing the game by five, and then OSU blew an eight-point halftime lead against Arkansas and lost on a tip-in 66-65. The Razorbacks used a 12-0 run the second half to takes its first lead of the game and then hold on. Ouch. It was a tough week for the Cowboys after they stunned Oklahoma last weekend in Stillwater. Now, Oklahoma State has to turn around to take on TCU at home and Kansas in Lawrence this week.

Iowa State is just a young team that is hard to figure out night to night. Sometimes they flash that talent and potential, other nights they look out of sorts and the youth is exposed. The Cyclones are 2-3 in their last five games and all five have been decided by double digits. Last weekend, Iowa State blew out Texas Tech by 18, but then they lost to Texas by 16 and Tennessee by 23. Iowa State was -18 in rebounding margin against the Volunteers, an area they’ve had some issues with all season. This week the Cyclones host West Virginia and then go on the road to Baylor.

Baylor played a couple of Big 12 heavyweights close last week in Kansas and Kansas State, losing by three and seven points, respectively. But Saturday’s 21-point loss at No. 20 Florida was ugly. The good news about the Big 12 is as follows: a good week, and Baylor can get itself back in the NCAA Tournament picture. The Bears play on the road against Oklahoma this week and then host Iowa State. Baylor desperately needs a 2-0 week, but it won’t be easy, because, well, nothing in the Big 12 this season.