As we head down the home stretch of the recruiting season, Matt Campbell and his entire staff at Iowa State continues to have success on the trail the program hasn’t seen in well over a decade. Most recently, the Cyclones landed 4-star wide receiver Joseph Scates out of Dayton, Ohio. Scates is the top-rated recruit in the Matt Campbell era, and highest Iowa State recruit since Allen Lazard in 2014, as the 6’3”, 175-pound wide receiver is ranked the 55th-best receiver in the country.

Scates told CycloneAlert Sunday that the loyalty of Campbell’s staff sealed the deal, saying, “The love shown is the No. 1 reason why. It’s not even about football with Coach Campbell, it’s past recruiting, it’s a love thing with not only him but with the rest of the coaching staff and the fans. The Cyclones have a fantastic, loyal fan base. Also the effort they have made throughout the years helping me get back to where I’m needed to be, academic-wise. It’s like I’ve been knowing them for almost my whole life the way I’ve connected and gotten closer to Campbell and Gasser and everyone else a part of the Cyclone Nation.”

That’s as good a sales pitch as a recruit can give a school. It wasn’t about winning or NFL prospects (although that is happening in Ames), it was about loyalty, honesty, passion and, yes, academics.

Well this is just the beginning for Campbell, who now has a top-50 recruiting class (No. 49), according to 247Sports, and has improved on each of the three classes he’s been with Iowa State for. As you’ll see in the chart below, Iowa State has seen a pretty substantial improvement in recent years.

First off, it was a real throwback seeing some of these names like Steele Jantz and Grant Rohach. But you can see the general improvement in recruiting year to year, something the team didn’t have under the brief Gene Chizik tenure or with Paul Rhoads. Dan McCarney did have some very solid recruiting classes. His 2002 class was in the top 40 nationally, which is something Campbell should be aspiring towards. And frankly, I think he’ll get there moving forward.

Here’s how I would describe Campbell’s recruiting tactics: mine the Midwest, the comfort zone for he and his staff from their Toledo days, for under-recruited players in Ohio, Michigan, Illinois and Wisconsin, while also attacking the JUCO levels and then head south to search far and wide for some skill position players and help in back seven on defense.

It’s a strategy that is working well thus far, but as the program improves, Campbell is starting to land more highly-touted recruits, instead of relying on 2 or 3-star players turning into All-Conference types.

At Toledo, Campbell was in the position of finding those players who Ohio State and Michigan overlooked. He did a darn good job of that, going 35-15 in his four seasons in Northwest Ohio.

But now, Campbell has the luxury of luring kids to a Power 5 program, so his talent pool naturally increases, along with his resources. On top of that, he’s coming off the best season the program has had in over a decade, which included two of the best and most impressive wins in the country this season, beating No. 3 Oklahoma in Norman for the first time since 1990 and then No. 4 TCU later in the month. Iowa State got as high as No. 14 in the AP Poll.

This kind of success opens doors to a different level of recruits that will not be felt until the 2019, 2020 recruiting cycles.

As the Big 12 also wraps up its best recruiting cycle since conference realignment a few years ago, the Cyclones aren’t falling behind, they’re only continuing to catch up to the rest of the pack. The days of Iowa State as a bottom feeder in the Big 12 ended when Matt Campbell was hired, and for as long as he’s in Ames, that’s not changing.

The Kansas State Wildcats pulled off a huge upset over the Oklahoma Sooners on Saturday. It was K-State’s second win ever over... 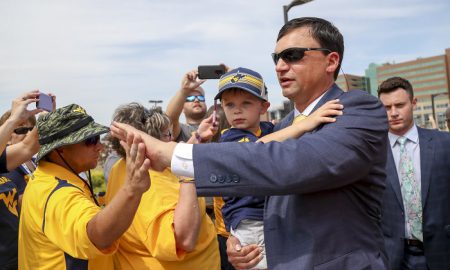 The West Virginia Mountaineers announced Monday that they will begin welcoming fans back to Milan Puskar Stadium at 25% capacity beginning on...