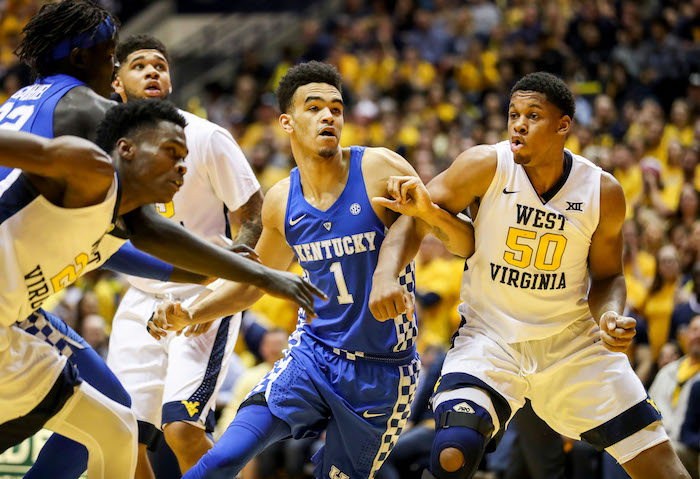 It wasn’t a good weekend for the Big 12 conference. The Big 12-SEC Challenge just wrapped up its fifth-straight year playing in late January, and after winning the first three and tying last season, the Big 12 lost the event for the first time ever, dropping six of ten games. There’s no doubt this has put a dent in the Big 12’s reputation as the obvious, “best conference in America.”

Over the past 48 hours I’ve heard lots of complaining from Big 12 fans saying, “we shouldn’t bother with this”, or, “the Big 12 is hard enough as is.” You know what you sound like? SEC football fans.

For years, we’ve crushed the SEC for its soft non-conference scheduling by using the explanation that has been bought and supported hook, line and sinker by ESPN and other media folks that, “ya know, the SEC is a big enough grind as is, so we need to take a step back when we can.” And rightfully so, we’ve crushed them for it. It’s phony and incredibly transparent, at least for those who can see through their SEC blinders.

Let’s just face the facts: the Big 12 didn’t have a good weekend. The good news about college basketball compared to college football is that the resumes, by the nature of the sport, are so much more in depth, that the Big 12 still has plenty of quality non-conference wins. But Baylor and Iowa State played like crap, Alabama did a great job face guarding Trae Young off the ball (expect to see more of that moving forward), Oklahoma State and TCU lost tight ones, and the Mountaineers blew another big lead. It happens… and yes, it sucks. But that’s not reason to start making excuses and complaining. Once again, STOP sounding like SEC football fans.

The only semi-excuse I’ve heard that is somewhat tolerable is to move this challenge into non-conference play. That being said, I still think it’s lame. Move it to the non-conference because the Big 12 slate is so tough? Well, considering the SEC just won the Challenge, is the Big 12 really that tough? I agree it is, but I’m looking at it from the perspective of an SEC fan, who would propose that argument, just like we all do to SEC football fans when we beat them on the gridiron.

As for moving it to non-conference play, I can deal with that, but I do think this late January date is an interesting and positive spotlight for the two conferences. There is no football being played and for many, it’s the unofficial start of college hoops play for many casual fans.

Then there was this idea from Andy Staples.

Barrett and I are available to consult. Have the teams block out the weekend between NFL conference champ games and Super Bowl and have neutral site bonanza with matchups determined a week in advance. https://t.co/Ghqb1Upcnh

I think this could be pretty cool. Rotate between a Big 12 and SEC city every other season. Nashville to Kansas City to Atlanta to Dallas. Have more fun with it, let fans from all teams interact, in an atmosphere that would resemble a conference tournament or NCAA Tournament weekend.

Moving to non-conference play as the ACC-Big Ten challenge does would just be copying the same trend that those two conferences, who are more widely respected in basketball than the Big 12, currently have.

Built-in advantage for the SEC (in theory)

Remember this too, there is a built-in advantage for the SEC. Since the SEC has 14 teams and the Big 12 only has ten, four teams from the SEC (since 2015-16, the bottom four teams from the previous season’s standings) are excluded from the challenge each season. So the worst teams in the SEC from the previous season don’t play. Granted, that doesn’t always mean a Big 12 team doesn’t get to play a bad SEC team. This year, Vanderbilt and Texas A&M are at the bottom of the SEC hoops standings, but both played this past weekend because they were not in the bottom four last season.

In the end, the Big 12 just had itself a bad weekend. Sometimes there’s no rhyme or reason for it, but then again, I do believe SEC basketball has come a long way over the past couple of seasons. The conference deserves credit for that.

But all I’m asking for is this: stop the excuse making and move on. No one wants to sound like an SEC football fan.

Big 12 Basketball Power Rankings: January 29th, 2018
Baker Mayfield and Trae Young or Sam Bradford and Blake Griffin: Who you got?
To Top