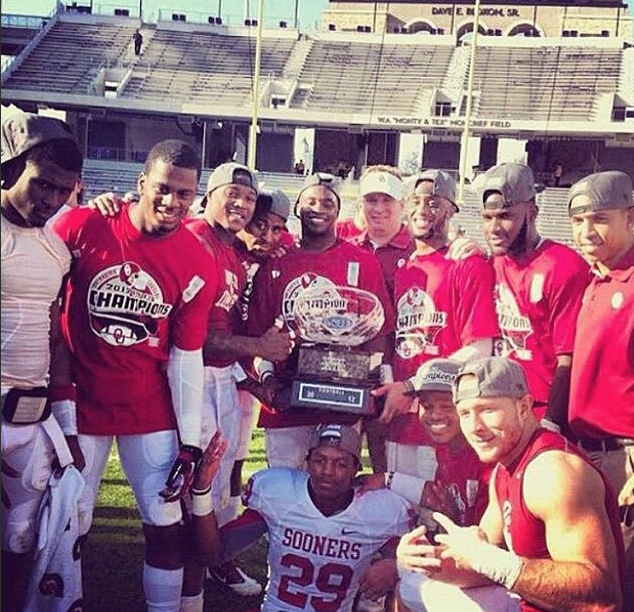 Life could’ve been different for former Oklahoma defensive back Kass Everett. Like every prospect that walks through the doors in Norman, he had aspirations of going pro. Unfortunately for Everett, who played at OU in 2012 and 2013, he suffered a severe sports hernia just before the OU pro day in 2014.

But like often is the case in life when facing a career challenge, you can either feel bad for yourself, or pick yourself up and move on. Kass Everett did the latter. He now serves as a financial consultant to professional athletes and prospects, as a financial advisor at Merrill Lynch in Oklahoma City.

“I did consider going into coaching. I love the game of football and wanted to be around it,” Everett admitted. “It was a big a blow to get dealt with the injury when I felt I had a chance to play at the professional level to some extent. I realized though, I wasn’t the same. The speed, the quickness I just didn’t feel like myself. Going into the finance field felt right, I got to still be around the game I loved, while helping other guys avoid common pitfalls and make conscious financial decisions. I get to see things from a different perspective and I feel good about that decision.”

Kass knows plenty about having to go the long way to gain success. He was a JUCO transfer from Pierce College in CA, and high school days were played in the Philadelphia are which is not exactly known as a football powerhouse region.

“We really paved the way for kids in Philadelphia to get looked at more seriously in football, were really known for basketball out there but we can play on the gridiron too,” Kass said. “Going the JUCO route is tough. Guys don’t get athletic scholarships and everything is a grind. It already is but it’s more. You have more life responsibilities, you have to mature quick, if you don’t have a locked-in mentality you won’t succeed. It’s a mission, a mission for a free education and opportunity, it’s not for everyone but if helps those late bloomers, and kids who just didn’t get noticed.”

The Sooners seemingly strike gold often on the JUCO scene with QB Josh Huepel, CB Will Johnson, WR Dede Westbrook and the list goes on. Big-time programs rarely go looking in the junior college ranks for their next star, but Kass explains why Oklahoma is so successful at it, saying, “Our coaches at OU really have an eye for talent, they see things that maybe others miss. Specifically, when it comes to Marquise [Brown, College of the Canyons], a lot of us already knew the kid had a special talent, but that size really bothered people. I knew he’d get a chance and I’m glad OU took that chance on him. He is special, you can tell.”

“Well I some of the criticism for Mike Stoops is fair, but certainly not all,” Kass said. “People sometimes can be overly dramatic and they don’t see big picture. A defense is a collective unit and there are a lot of people who hold accountability, some of it can be pointed to the guys we have brought in. It is really tough when some of your top guys are no longer available, and we’ve done a good job with some of the guys who were viewed as lower-level talent coming out of high school. Well find out a lot more soon, how much of the issues have been with Mike or with players now, with the surplus of talent we have coming in. We’ve had good talent there before, but this is a little different. The big thing is mentality. We have come out hungry, and it seems that mentality, for one reason or another, dwindles as the season has went on these last few years.”

“Before I went to Pierce [College], I went to the University of Delaware and my coach there [most recently] coached in the NFL with the Cardinals and I learned a lot from him. It was weird for me at first coming in at OU because I was recruiting by Coach [Willie] Martinez, and [Brent] Venables and coach Stoops stepped in not long after I got to campus. My first two years there Mike was very hands on with the DBs, he is very good with X’s and O’s and has a lot of strengths.”

Kass, was in attendance at senior bowl practices in Mobile, and actually caught the same flight as Baker Mayfield.

“Baker was impressive from the start out here, and the guy walked off the plane into his pads and onto the field,” Kass explained. “It’s just impressive you don’t see stuff like that. Coaches took notice, scouts took notice and he has done nothing but raise his stock. Obo [Okoronkwo] was awesome in the pass rushing drills, as you’d expect, it’s the strength of his game and he did a great job. Baker tossed a few of his nice TDs to Dimitri [Flowers]. They had him still doing a lot of the things he did at OU, a lot of stuff out of the backfield running routes, he impressed as well.”

As for his time at Oklahoma, from 2012-2013, Everett will never forget one game in particular, saying, “My favorite moment is definitely winning the Sugar Bowl and beating Alabama, everything we schemed up just seemed to work in that game, and it was an awesome game plan and we had a lot of fun. My favorite play though has to be the strip sack I had against West Virginia.” I candidly reminded him of a nice defensive play he had made vs. Alabama in the red zone where he ran over the camera guy; he chuckled and said, “I look back on that and think, ‘ah man how could I not help that guy up! ‘Truth be told though, I was so caught in the moment, I didn’t even realize I had made that kind of contact with him. If I could take it back I would’ve helped him up.”

Also, Everett runs a business in the OKC area called City Flavors! Please check out their Facebook page, then a location yourself.