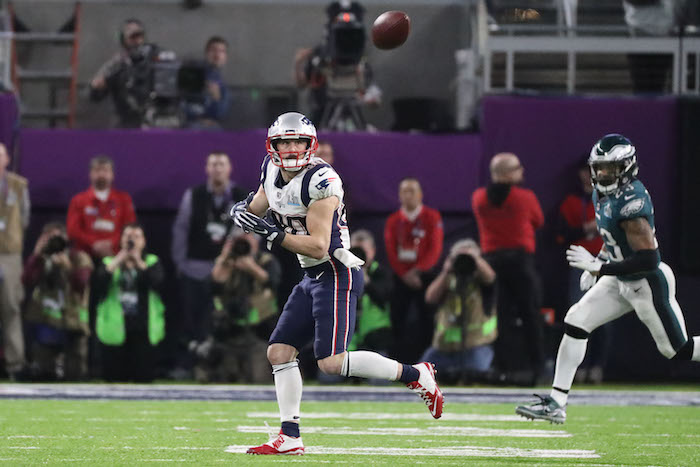 Super Bowl LII is in the books and unfortunately the trash has come out in Philadelphia (see below). Regardless, we told you two weeks ago to just root for the Big 12 players in the game, rather than having to pick a side between the two of the easiest sports teams and cities to hate.

People yelling “Everything is free,” looting, trashing this gas station. Damn it, Philly we better than this. pic.twitter.com/WecXaAmrFh

So here’s a look at how each Big 12 player who was a part of the respective Super Bowl teams fared.

Lane Johnson, tackle (Oklahoma): Johnson’s name was mentioned on a couple of occasions by Al Michaels and Cris Collinsworth as one of the reasons for Philly’s success this season. Johnson had a great game blocking, as did the entire offensive line, as the Eagles did not allow a sack in the game.
Halapoulivaati Vaitai, tackle (TCU): “Big V” played in all 16 games this season, starting 10, and played yesterday, helping the offensive line’s outstanding performance.
Marcus Johnson, wide receiver (Texas): Johnson was listed as the back up to Alshon Jeffery, who had himself a game with three catches for 73 yards and a touchdown. Johnson didn’t have any statistics in the game.
Rasul Douglas, cornerback (West Virginia): Douglas was listed as the back up to Ronald Darby at cornerback and did not have any statistics in the game.
Shelton Gibson, wide receiver (West Virginia): The Eagles’ fifth-round pick didn’t get a ton of playing time this season with just two catches on the year and was listed on the depth chart, but got no action or playing time in this one.
Wendell Smallwood, running back (West Virginia): The Eagles are loaded at the running back position and the Super Bowl was all about LeGarrette Blount, Jay Ajayi and, surprisingly, Corey Clement, who led the team in receiving and was listed behind Smallwood on the depth chart. Smallwood had zero stats in the game.
Najee Goode, linebacker (West Virginia): The former two-time team captain in Morgantown became a factor for the Eagles in the second half of the season. He made in tackle in every game but one from October 23rd on, including two tackles in the NFC Championship victory over the Vikings. In this game he had two tackles.

Danny Amendola, wide receiver (Texas Tech): “Danny Playoff” held true to his nickname in the loss, finishing with eight catches for a team-high 152 yards.
Geneo Grissom, defensive line (Oklahoma): Grissom played sparingly during the regular season, but has actually seen decent run during the playoffs, with four tackles over two games. But he did not have any stats against Philadelphia.
Malcolm Brown, defensive line (Texas): Brown was drafted by New England in the first round of the 2015 NFL Draft and started 12 games this season, with 49 tackles and 2.5 sacks. Brown finished tied for third on the team with six tackles, with .5 tackles for loss.
LaAdrian Waddle, offensive line (Texas Tech): Waddle was inactive for the AFC Championship Game with a knee injury, but he played in 12 games this season and started four for the Patriots. He was listed on the depth chart as the back up right tackle, but did not appear to see any action in the game.

All in all, I’m just glad the nightmare is over. The next time we have some real football to see? The opening weekend of the college football season!