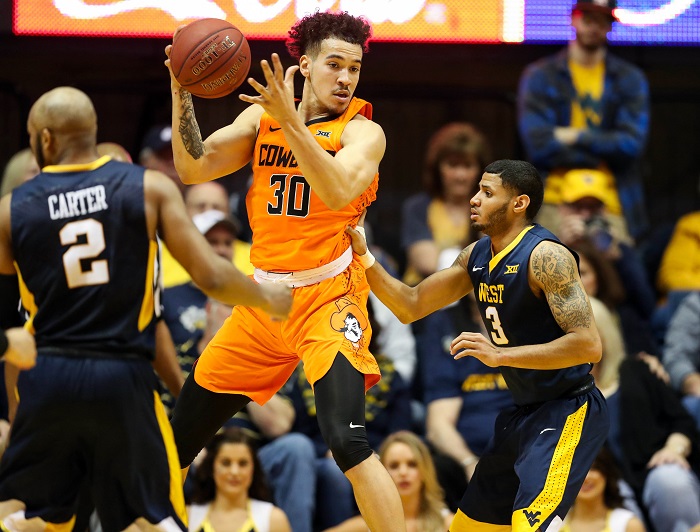 With eighteen games on the Big 12 men’s basketball slate we’ll break down each set of games upon completion. Today it’s a review of the twelth set of games in the Big 12 Conference, played on Feb. 10 (rankings in parenthesis in standings are AP).

Keenan Evans, Texas Tech: Along with the 19 points, the senior had five of Tech’s 13 steals in the game.
Manu Lecomte, Baylor: This guard doesn’t get quite enough credit as one of the league’s top scorers. He poured in 18 and dished out 6 assists in Baylor’s upset win over Kansas.
Cameron Lard, Iowa State: I know Lindell Wigginton had 26 points, But Lard was a force to be reckoned with inside with a 19-point, 17-rebound double-double.
Cameron McGriff, Oklahoma State: In a game defined by OSU’s 30-for-36 night at the free-throw line, McGriff scored 20 points and was a perfect 13-of-13 from the stripe.
Vladimir Brodziansky, TCU: The versatile big man poured in 25 points, shooting 11-of-19 from the floor, and grabbed 6 rebounds.
THE SIXTH MAN
Nuni Omot, Baylor: The long wing has played some of his best basketball the last three weeks. Against Kansas he scored 17 points off the bench.

So Bracketology updates drop tomorrow at both ESPN.com (Joe Lunardi) and CBSSports.com (Jerry Palm). I’ll tweet out the Big 12 selections on Monday. But on Sunday the NCAA presented its first window into its selection process by revealing the 16 teams that, right now, represent their Top 4 seeds in each region for the NCAA Tournament.

Plus, Palm did me a favor and popped on to reveal his current 68-team tournament field. Here’s the Big 12 slant.

And now for something completely different …

Man cannot live by Big 12 basketball alone. Once a basketball season I must head back to the alma mater, in this case Stephen F. Austin State University in Nacogdoches, Texas (home of, in case you did not know, the only men’s and women’s team in Division I basketball with an undefeated home record. The Lumberjacks and Ladyjacks won their games handily Saturday night over Northwestern State). My buddy, Chuck Cox, and I picked that weekend because Northwestern State has always been one of SFA’s two natural rivals (Sam Houston State is the other) and because one of Northwestern State’s assistant coaches, Deneen Parker, is a Ladyjacks legend and we wanted to say hello.
A happy by-product of that, at least for me, was the Big 12 schedule. For once there weren’t a pair of ranked teams playing one another. In fact, the afternoon was filled with what outsiders would look at as a slate of lopsided affairs. Ranked teams were playing unranked teams. Winning teams in conference play were playing losing teams in conference play. If there was ever a weekend were the Big 12 might actually go according to form, well this was it, I thought. So, I set my DVR and figured I would be watching a lot of basketball on Sunday.

We made the drive from Dallas to Nacogdoches. Now, when we left Dallas it was windy and 34 degrees. When we got to Nacogdoches it was muggy, drizzly and 65. Such are the vagaries of Texas weather in the winter. By 3 p.m. we had settled in our seats and, as we are likely to do nowadays, started checking our phones. Chuck got to the Big 12 scores first.

“So TCU is beating Texas pretty good,” he said.

I wasn’t terribly surprised by that. I mean, after all, they played a double overtime game in Austin last month, which Texas won. Plus, the game wasn’t over, so I figured there was a chance Texas would come back. TCU has had difficulties holding leads this season.
“Iowa State has a one-point lead over Oklahoma.”

The game was in Ames, Iowa at Hilton Coliseum, and that always gives the Cyclones a chance. People forget, amid all the promotion of Oklahoma’s Trae Young, that ISU’s Lindell Wigginton is the conference’s second-leading freshman scorer. Between him and redshirt freshman Cameron Lard, I figured ISU could stay in this one before OU would pull away.

“Baylor is up on Kansas.”

The one area Baylor matched up better in this one was its length inside. Kansas is deficient in frontcourt depth. But the Jayhawks have managed to find a way to compensate all season and Baylor had not, to that point, beaten a ranked team this season. It would be tough, I thought, but Kansas can come back and win.

OSU went into Morgantown and beat West Virginia? That result ended up defining the rest of the afternoon.

TCU held onto its big lead over Texas and won by 16 points, 87-16. Mo Bamba was the only Longhorn in double figures and only had one block. TCU played solid defense, forced 11 Longhorns turnovers and had Vladimir Brodziansky’s 25 points to match Bamba’s effort.
It was Iowa State that pulled away from Oklahoma, and not the other way around. Wigginton had 26 and Lard had a double-double as every Iowa State starter scored in double figures. This without their outstanding junior point guard, Nick Weiler-Babb, who is still out with an injury.

Baylor beat Kansas by 16. The depth got the Jayhawks in the end. The Bears have it, with Nuni Omot coming off the bench with 17 points. Plus, Kansas needs to figure out what’s up with Svi Mykhailiuk, who after scoring 1 point against TCU on Tuesday scored just 2 points against Baylor.

And Oklahoma State? That was the closest game of the day, with the Cowboys winning by 3 points. Every Cowboys started scored in double figures, counteracting West Virginia guard Jevon Carter’s 33 points. Along with the stellar game at the free-throw line as a team, OSU’s Cameron McGriff was a perfect 13-of-13.

It was enough to get me to warn the folks in Lubbock that bad things might be heading their way.

One Tech fan assured me things were under control.

Naw …we got this.
Been enough upsets today. https://t.co/TSWhLRjLcu

And, she was right. The Tech-K-State game was the one game that probably went most according to form, with Texas Tech winning rather handily. You know you’re having a good night when your forward, Tommy Hamilton IV, goes 4-for-4 from the 3-point line.
Now let’s dig into that for a minute. For all of the upsets yesterday, Texas Tech became the sole possessor of first place in the Big 12 Conference. Remember — Kansas has had the regular-season title on lockdown for 13 straight seasons. The fact that Tech is unchallenged at the top on Feb. 11 is a massive thing.
Just ask Texas Tech.

The best start we’ve ever had in Big 12 play. #WreckEm #4To1 pic.twitter.com/vaEolnNT5n

Twelve games into the season and it’s the best start the Red Raiders have ever had in Big 12 play. Better than anything Chris Beard’s old boss, Bobby Knight, ever did. The Red Raiders have never won a regular-season or a postseason tournament Big 12 title since the league was formed after the 1996 season. How long has it been since Texas Tech won a conference title of any kind?

That is what Beard’s Red Raiders are aspiring to right now. A conference title, a conference tournament title and a deep NCAA Tournament run.

What’s happening in Lubbock has the potential to be historic. It could be why their athletic director, Kirby Hocutt, is soliciting advice on what the Red Raiders can do to make the gameday atmosphere better.

Red Raider Nation, how can we continue to improve the home court advantage at bb games? Best idea gets 2 tickets for Tuesday’s game vs OU.

He had 158 responses as of Sunday morning. Hocutt isn’t worried about Tuesday’s game with Oklahoma (in fact, he was giving away two tickets to that game). That game is sold out. But he’s probably a bit concerned about games like a weekday game with Oklahoma State a couple of weeks ago.

That near-empty baseline second level could be a reason why #Wreckem coach Chris Beard is offering to help financially-strapped fans get tickets for #RedRaiders games #Big12MBB @Heartland_CS pic.twitter.com/gNmBVlt3ip

It’s time to show up Tech fans. Every night, every game. Even if it’s a team with a losing record in conference play. Why? Well, you just saw why on Saturday.

This is the best basketball conference in all the land, in my opinion. Saturday shows you one reason why. No other league is a gauntlet, night after night, game after game, like the Big 12. The chance still remains that all 10 teams in the Big 12 could make postseason play, whether it be the NCAA Tournament or the NIT.

There are six more games left on the conference slate, six more games for the Big 12 to make its case for seven or more teams in the NCAA Tournament. This should be a lot of fun.

I’ll get back to watching games starting Big Monday. I’ll have to watch the alma mater on ESPN3 the rest of the way.

Looking ahead to this week: West Virginia gets a shot at revenge against TCU and Baylor tussles with Texas on Monday. Tuesday brings the huge OU-Tech game in Lubbock, while Iowa State tries to keep Kansas on the losing tip. Then, on Wednesday, K-State and Okie State wrap things up with an early game on ESPNU.