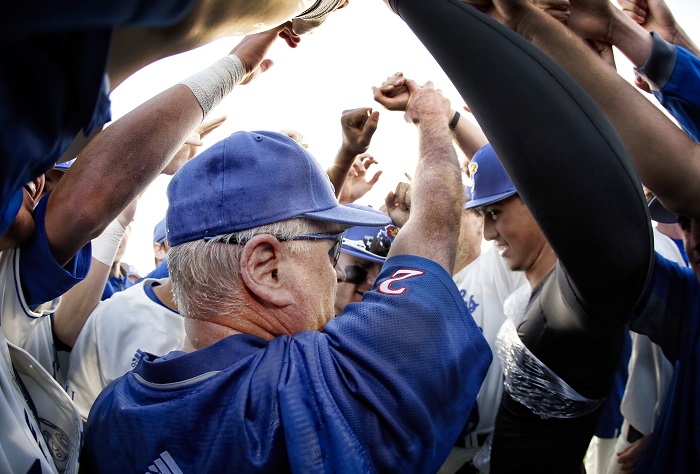 With the college baseball season right around the corner, we start previewing every team in the Big 12. Here’s a closer look at the Kansas Jayhawks.

This team is a darkhorse. The lineup returns all but Matt McLaughlin. This was a team one year ago, who struggled out of the gates to the regular season with a 2-6 start. Their non-conference slate brought on awful results, including two losses to Samford. Additional losses to Northwestern State, Houston Baptist and Oral Roberts did not help. But as the season grew on, the team matured. The only Big 12 team who swept the Jayhawks was Big 12 Conference co-champions Texas Tech. By the end of the season, they amassed a winning record and were considered for the NCAA Regionals.

Junior Rudy Karre (.254 avg./.354 slg./.416 obp) is probably the top bat in this lineup. He finished Big 12 play in fifth for both doubles and runs scored. He was second on the team with three home runs. Owen Taylor’s .291 batting average was second out of the regular lineup, only behind the now-graduated McLaughlin. With the entire lineup having more experience, production should go up. Expect Taylor to hit over .300 this season. If runners are on base, look no further than Jaxx Groshans to bring them in. As a freshman, Groshans racked up 38 RBIs on the season. During conference play, Groshans tied for the lead with two triples. The only other freshman in the 7-way tie was Texas Tech’s Josh Jung. Sophomore James Consentino also cracked a leaderboard as a freshman as he racked up 31 hits in Big 12 play to be No.9 in that category. The talent is there. Lots of experience could lead to excellent chemistry. Don’t sleep on the Jayhawks this season.

If there is one area depleted on this Kansas baseball team, it comes in quality pitching. Blake Weiman and Stephen Villines are now in the minors. When you look at the returning roster, all eyes go directly to Jackson Goddard. The junior is a strikeout pitcher, who ranked fifth in conference play last season. His season total was by far the most on the team with 75. While his 4.29 ERA is a bit suspect, he was just a sophomore. Expect this to lower as he hopes to raise his draft stock. Another player to keep an eye on is Taylor Turski. He is a transfer, who dominated at Palomar Community College with a 1.09 ERA in 79 innings as a freshman. His 2017 campaign for the Jayhawks saw a 3.51 ERA with 68 strikeouts in 13 starts.  The main question here is: Who will fill the shoes of Big 12 saves champion Villines?

Kansas is looking to start off with a major confidence boost. They start off with two teams from states who receive a good slate of snow, and two SWAC teams. If Kansas falls victim more than twice in their first 11 games, it’s going to look bad. The two midweek games at Florida State will be a great test. Yes, they are midweek games. However, Florida State is one of those teams who score recruits that decided to ditch the signing bonus for a quality education. This is followed up by a weekend series hosting 2017 NCAA Regional team St. John’s. During their breaks in Big 12 play, they’ll host Morehead State and travel to Cincinnati. It’s really kind of a creampuff schedule.