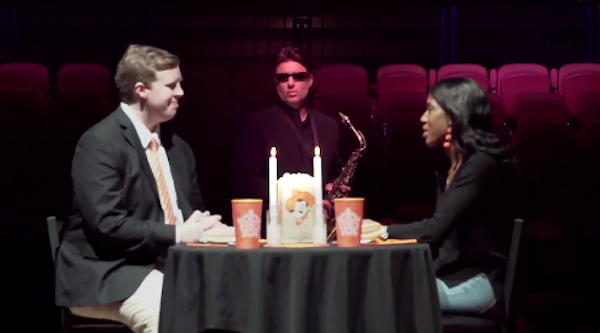 Mike Gundy is up to his usual offseason tricks. The Oklahoma State head football coach has done plenty of goofy promotional things to get fans to go to other sporting events. It was nearly one year ago, to the day, that Gundy rocked a singlet and a “Big Daddy” mug to get students to attend an upcoming Cowboys Wrestling match.

Now its Gundy trying to get students to spend their Valentine’s Day with their loved ones at Gallagher Iba Arena when the Pokes play Kansas State in basketball.

Roses are red
Violets are blue
Our tickets are cheaper
Than dinner for two!

For a guy who has never been an actor, Gundy did actually look as if he was playing the song, except for when he pulled his mouth off the instrument and the music was still playing. But for the most part it looked like he was going along with the beat and the flow. But the kicker of “See you in Gallagher” absolutely takes the cake. In fact, if I already had the best dinner reservations in Stillwater lined up for my wife or girlfriend, I’d dump those plans in a heartbeat and take her to the game, just because of Gundy’s mullet and one liner. Plus, the two for $10 ticket price isn’t too shabby either.

For all the flirting Mike Gundy does with other jobs, is there anywhere else in the country he’d be such a folk hero (while consistently losing to his biggest rival) that he could pull this stuff off and be more beloved each time he does it? The answer is “No.”

Mike Gundy belongs in Stillwater. This is just another example of that.