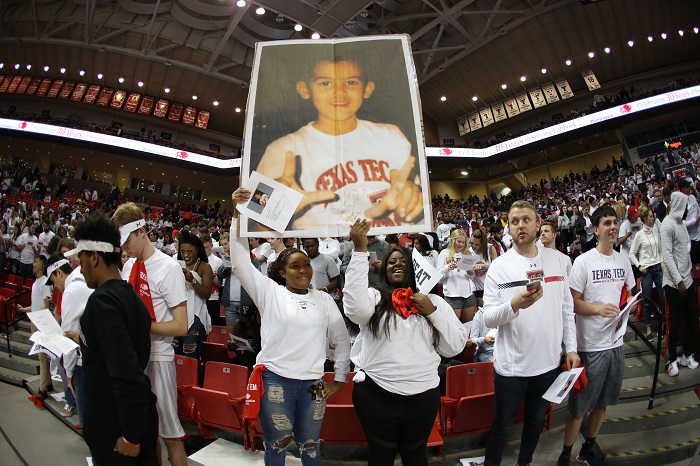 It was another Big 12 battle in Lubbock on Tuesday night between the Red Raiders and the Oklahoma Sooners. With Tech playing the best hoops in the conference and OU coming to town with Trae Young, there was plenty of hype surrounding this game.  Young has become the biggest star in college basketball this season, along with the fact that Young’s father played for Texas Tech, which is where Trae considered playing his college ball.

Naturally, Young was going to get heckled, as any star player should expect.

The “Overrated!” chant is classic and gets the point across. No harm, no foul, just standard college basketball fans.

But things got ramped up over the final few minutes, with Tech WINNING the game, by the way, in an embarrassing fashion.

A “F*** you, Trae Young” chant from the Texas Tech student section

That’s shameful. And every single Texas Tech fan that participated in the chant should be remorseful.

I don’t know Trae Young. But man, every time I hear him speak to a reporter, he’s a gentleman, well spoken and humble. I get that ESPN has oversaturated our TVs with Trae Young, but that isn’t his fault. It’s ESPN latching onto the latest “hot thing” to try and keep its ratings and subscribers from continuing to decline. But even if Trae Young isn’t as good of a guy as he appears to be, this is classless and out of line. There’s no other way to explain it. And there is NO excuse for it.

I think back to four years ago (where is the time going), when Oklahoma State guard Marcus Smart pushed a Texas Tech fan, and there were allegations of racial slurs and all the rest. It wasn’t a good look for the Tech fan base, but I came to their defense because that was one fan acting like a fool?

This? No. This was a student section. I’ve been in student sections and there’s always the one jackass that tries to start an overly vulgar chant that crosses the line. But no one follows him and he’s quickly shut down by his fellow students. That is what should have happened on Tuesday night, but did not.

ESPN’s Seth Greenberg came out and voiced his displeasure, calling it “unacceptable”. But Greenberg was wrong to say he expects a statement from Texas Tech University and the Big 12. What are those two supposed to say? We don’t condone our student section chanting, “F*** you, Trae Young” ? Oh, you don’t say? Thanks.

This is called basic human decency and maturity. It’s not something that can, or should, be taught by higher education. This is no fault of Texas Tech University or the Big 12 conference. This is on the students, and nobody else should shoulder the blame.