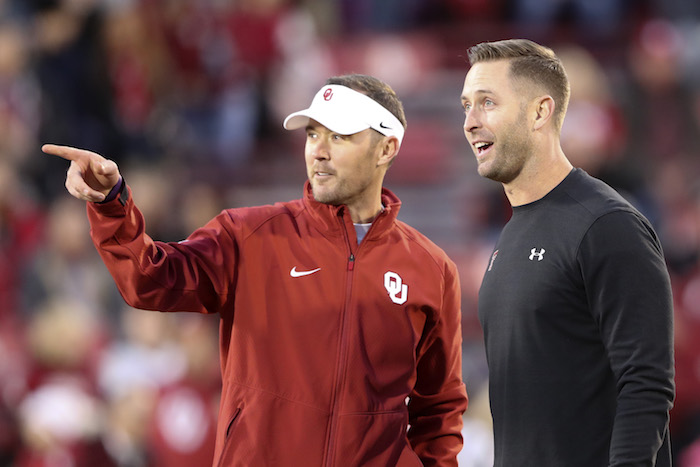 It’s almost that time of year again! Football is ba…, well sort of. Spring football is just right around the corner across Big 12 country and what better way to kick things off with a little watch list? Dozens of early enrollees are already on campus and I thought that before we kick off spring ball, I would give you one early enrollee to watch for each Big 12 team during spring practice.

*All Rankings and Measures are Provided by 247

It’s no secret that Texas struggled offensively last season. I know Texas loaded up on the defensive side of the ball, but I feel like I had to go with an offensive player here. I could have easily gone with an offensive lineman, but a wide receiver has an easier time finding playing time early. The Longhorns will still have Collin Johnson returning but they do lose both Armanti Foreman and Reggie Hemphill-Mapps. Now insert Brennan Eagles, a top-10 wide receiver in the nation for the 2018 class. Eagles has the size (6’3.5) to be physical on the outside and really compete down the field on single coverage. He has solid quickness and as long as the offensive line play improves, Texas fans should be excited to see what Brennan Eagles can provide for this offense that needs a spark.

I feel like this one is straight forward. The Sooners struggled defensively last season against the run and the pass. In the Big 12, you must defend the pass because everyone will try to air out against you. It was sort of a carousel last season in the secondary, but I feel like Brendan Radley-Hiles can make an immediate impact. He is a top-50 player overall in the country and do not let his size fool you. Radley-Hiles is a very physical corner who has the capability of locking down a receiver. I can almost assure you that you will see this guy on the field in 2018 and I am just curious to see how big of an impact he can have on this defense.

Look, Kenny Hill had a solid senior year at TCU. But, if TCU had a Baker Mayfield, Mason Rudolph or even a Will Grier, I think the Horned Frogs could have been a national title contender last season. The team around the quarterback position was there, but it just needed an elite quarterback to take that team to the next level. Shawn Robinson was a highly touted quarterback who started one game last season as a freshman (Tech game), but he didn’t really have to do a whole lot to win it. I think Robinson is good, but Justin Rogers is the type of quarterback that can take this program to even further heights.Rogers is the #3 dual threat QB prospect for the 2018 class, however he did suffer a knee injury early in the 2017 season that kept him sidelined for the remainder of the year. Whether he is healthy enough to compete in spring ball, I don’t know. But what I do know is that Justin Rogers has the tools to be a top-tier quarterback at the collegiate level.

Baylor needs quarterbacks like I needed more money when I went to Las Vegas a few weeks ago. To simply put it, behind Charlie Brewer, the Bears don’t have any reliable options. Luckily for Baylor, Bohanon chose them instead of his in-state school (Arkansas). Bohanon is a very interesting prospect. He has the size you’re looking for in a quarterback and you can see his unique skill set, but I still think he is a raw prospect. I am not sure what level he played at in Arkansas, but it didn’t look too good. Bohanon could beat out Charlie Brewer and totally prove me wrong, but I think it will take some time and coaching up for him to win the starting job soon.

Bernard certain is helping a position of need. Oklahoma State lacks serious veteran leadership in the back end of its defense and Mike Gundy has even cited wanting stronger, bigger athletes at the position for the Big 12’s style of play. Enter: Jarrick Bernard. Bernard looked like a man amongst boys playing for Evangel Christian Academy. He had great instincts and good jumps on balls. He also sometimes lined up at cornerback, as well as safety, and was not afraid to show his physicality on the snap of the ball. This is a very exciting addition for Gundy, and should pay immediate dividends in 2018.

West Virginia will need to re-load with some fresh faces in the secondary and what better way to start than with a 6’2 corner? Keith Washington was a former Michigan player who decided to transfer and before coming to WVU, he spent a year at a JUCO. Obviously, his height stands out, but what jumps out to me is his physicality and I truly believe this guy can be a real lockdown corner for the Mountaineers. With a defense that really had their fair share of issues in 2017, Keith Washington can play man on the outside which can help this defense take more chances blitzing without having to worry as much.

Much like Baylor, Iowa State needed bodies at the quarterback position. Luckily for the Cyclones, Kyle Kempt received an extra year and they signed two quarterbacks this past cycle. My focus in the spring for Iowa State will be QB Re-al Mitchell. On tape Mitchell shows some serious upside. He can sling it and make reads just about as good as any other Big 12 QB in the 2018 cycle, but there is one thing that separates him: SPEED! This kid has some serious jets and if defenses aren’t careful, they could be seeing the back of his jersey headed towards the end zone. Out of all the other incoming quarterbacks in the Big 12, Re-al Mitchell may have the highest upside out of them all. I can’t stress enough how big of a get Mitchell was for Matt Campbell and company.

It’s no secret that David Beaty is probably on the hot seat right now because 2018 is a do-or-die type of year for him and this staff. I was deeply concerned at the number of JUCO guys they took because they make up over half of this 2018 KU class. It gives me some bad memories of the Charlie Weis approach during his tenure in Lawrence. Now onto QB Miles Kendrick, who I don’t think is a better passer than Peyton Bender or Carter Stanley, but he is going to be the most mobile of the group. Last season I was calling for Carter Stanley to start over Peyton Bender due to his athleticism. Kansas was going to struggle on offense last season regardless of who started, so I wanted the guy who can extend plays. That is could be the same case heading into 2018 with Miles Kendrick, but I am interested to see how his size affects him at this level.

Stop right there, I know what you’re thinking. A fullback Derek? Really? Think about this, what other team in the Big 12 uses their fullback like Kansas State does? Oklahoma used Dimitri Flowers nicely but overall, Kansas State has always been the Big 12 school to use fullbacks consistently over the years. Mr. Do it All Winston Dimel is now gone and for those who don’t know, he was a touchdown machine and a very important piece to this offense. Luke Sowa comes from a nearby JUCO and can make the starting lineup in no time if he shows up to play. He is very mobile for a fullback, who can not only catch it out of the backfield, but he can also provide that toughness to block linebackers or even some defensive ends.

I could have easily gone with QB Alan Bowman, who should compete for the starting QB job in Lubbock. However, I just can’t pass up on giving Myller Royals some praise here. On film, Myller shows that he is every bit of 6’4″, as you will see him go up and catch the ball at the highest point when the ball is thrown his way. His size will remind Tech fans of current WR T.J. Vasher (6’6), but I really think Myller Royals can stand out on his own and be special at Texas Tech. Again, his quickness and ball skills at his size have all the ingredients for success. How in the world was this guy a 3-star? I don’t know. This may sound like a hot take, but I wouldn’t take any other receiver that other Big 12 schools landed in 2018 over Myller Royals. To me, he may be the best WR prospect in the Big 12 for this year’s class.