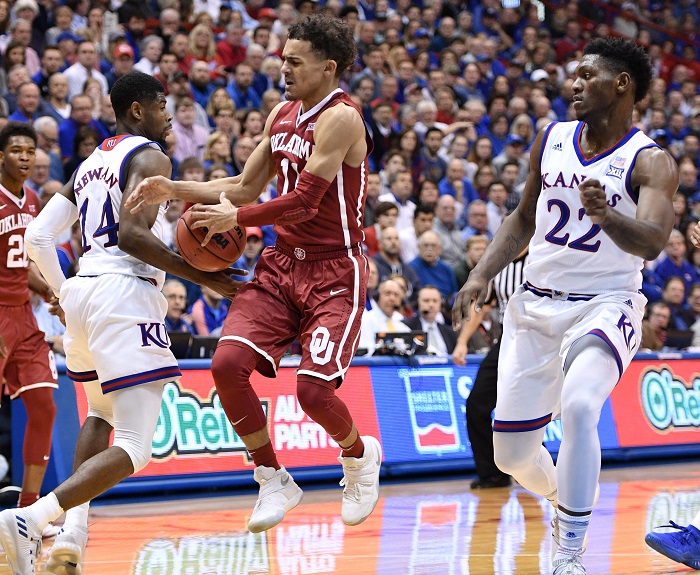 With eighteen games on the Big 12 men’s basketball slate we’ll break down each set of games upon completion. Today it’s a review of the 15th set of games in the Big 12 Conference, played on Feb. 19-21 (rankings in parenthesis in standings are AP).

Devonte’ Graham, Kansas: He FINALLY got a break, playing time-wise. He still put up 23 points and 7 assists as the Jayhawks stay on track for Saturday’s showdown with Texas Tech.
Sagaba Konate, West Virginia: 10 points, 10 rebounds and a whopping 9 blocks helped the Mountaineers break the Baylor Bears’ 5-game winning streak.
Kendall Smith, Oklahoma State: He had 21 points and 6 assists to help the Cowboys upset Texas Tech.
Desmond Bane, TCU: He scored 27 points to help TCU win its second straight game.
Xavier Sneed, Kansas State: Sneed only scored 9 points, but he dominated the glass for 13 rebounds in the Wildcats’ win over Texas.

Silvio De Sousa, Kansas: He scored 10 points in 13 minutes off the bench of the Jayhawks. Have they finally found some frontcourt depth?

Here are the NCAA and NIT Bracketology updates as of Monday.

#NIT #Bracketology via #NYCBuckets 5 Seed #OKState #CyclONEnation not projected to be better than .500. Considers #SicEm to be very close to being an #NCAA Team @Heartland_CS https://t.co/WjYYGkYsgo

Kansas 104, Oklahoma 74: I can think of only two times this season in which I’ve felt strongly enough after watching a game to question the preparedness of one of the teams. The first was West Virginia’s loss to Iowa State. The second was Oklahoma’s loss to Kansas on Monday night.

I don’t want to take anything away from Kansas because there was so much good in this game for them. The Jayhawks shot 60.9 percent from the floor, 55.2 percent from the 3-point line and 90.9 percent from the free throw line. Good luck beating any team when they shoot like that. Devonte’ Graham had 23 points and 7 assists. Malik Newman threw in 20 points. Svi Mykhailiuk looked like he emerged from his mini-slump (some of it brought on by a minor injury) and Lagerald Vick continued his resurgence. Mitch Lightfoot blocked three shots in seven minutes. Heck, even Silvio De Sousa made a case for more playing time with 10 points in 13 minutes subbing for Udoka Azubuike. That might be the biggest development. If De Sousa is ready to play a bigger role for the Jayhawks that bodes well as the tail end of the season approaches.

In fact, this one was done early. The Jayhawks started the game on a 10-0 run. But it was more than that. Oklahoma looked like they weren’t ready to play. Head coach Lon Kruger rolled the dice on changes to his starting lineup — Kameron McGusty, Kristian Doolittle and Jamuni McNeace started in place of Brady Manek, Khadeem Lattin and Rashard Odomes. McNease (18 points) and McGusty (22 points) both ended up having nice games. Doolittle wasn’t much of a factor. But everything seemed disjointed for OU early, and the lineup changes were probably the cause of it considering the Sooners played 48 hours earlier. The other was that guard Trae Young, again, started slowly in the scoring column. But unlike other games this season, he didn’t pick it up in the second half. He finished with just 11 points and 9 assists, and he could have four or five more assists if the Sooners had been shooting better.

Young’s troubles from beyond the arc are now epic. He was 1-for-5 on Monday night and he is now 5-for-32 in his last four games. It’s having a huge impact on his game and a huge impact on the Sooners’ season. Teams are dedicating themselves to picking Young up far outside the arc and it’s having a real factor on his scoring because most of his 3’s are contested and when he drives the further out he has to start that drive, the easier it is for the defense to adjust and help. Plus, the Sooners’ transition game is now what it was a month ago.
OU probably wasn’t going to win on Monday night anyway. The Sooners haven’t won in Allen Fieldhouse since 1993. But the Sooners are in a complete tailspin. They’ve now lost six straight and eight straight on the road and as their Bracketology seeding drops, so too do their NCAA Tournament hopes. Remember — most analysts covering the conference agree that a team with an 8-10 league record coming out of the Big 12 should make the NCAA Tournament. The Sooners now have nine league losses. Trouble is definitely brewing in Norman.
Meanwhile, Kansas gets five days to rest before heading to Lubbock to face Texas Tech in a game that should decide the Big 12 regular-season title.

Meanwhile, the unthinkable happened during the game.

Kansas’ Devonte Graham just got taken out of a game for the first time in 38 days ending a streak playing every minute of every game in the last 10.

Let that sink in. Graham hadn’t received a break during a game for five weeks. That’s just nuts. Kansas head coach Bill Self said before the game that he would rest Graham when OU rested Young. And he was true to his word.

West Virginia 71, Baylor 60: Now this game may have looked like it was close at one point, but don’t forget that West Virginia was up, 40-18, at halftime, after finishing the first half on a 25-12 run. From there it was pretty much academic.

I think the biggest plus in this game for West Virginia was Sagaba Konate. He had been in a sort of a mini-slump the previous three games, failing to crack double figures in either scoring or rebounds. Not surprisingly, West Virginia lost two of those three games. But against Baylor Konate had 10 points and 10 rebounds and that was key because Baylor has a long, athletic front line so Konate needed to control the paint. Well, will 9 blocks do it? Because that’s what Konate had Tuesday night. Nine blocks. Wow.

Meanwhile, four other West Virginia players were in double figures — Esa Ahmad (15 points), Jevon Carter (15 points), Daxter Miles Jr. (10 points) and James Bolden (10 points). With Konate controlling the paint and the scoring balanced, the Mountaineers didn’t have to shoot an exceptional percentage to win (and they only shot 43.4 percent from the floor).

Baylor, after winning five straight, finally cooled off. Jo Lual-Acuil Jr. had 16 points while Manu Lecomte had 12. But that huge production the Bears have gotten off the bench from Terry Maston Jr. wasn’t there on Tuesday, as he scored just 5 points. If the Bears aren’t getting points from a third option, it’s going to be hard for them to overcome the teams in the upper echelon of this conference.
Meanwhile, this foul disparity in the West Virginia-Kansas game on Saturday has some legs.

West Virginia has spoken to the Big 12 since the Kansas game where it were outshot by 33 at the foul line… https://t.co/YncUL7o1yB

Oklahoma State 79, Texas Tech 71: I told Ken Miller and Trent Condon of KBGG 1700-AM in Des Moines on Wednesday afternoon two things about this game. First, Oklahoma State could win it. Second, Texas Tech guard Keenan Allen probably wouldn’t play. Well, one of those things happened Wednesday night (listen to my appearance below).

I saw Oklahoma State on Saturday against TCU and Cowboys head coach Mike Boynton Jr. wasn’t happy with his team’s effort. So, I figured the Cowboys would come out with a higher effort, which would at least give them a chance to win. As for Allen, coming back four days after a toe injury seemed highly unlikely to me. But, he played 25 minutes. Unfortunately, from a scoring standpoint, he was ineffective, scoring just 2 points on 1-of-7 shooting. But his teammates picked him up, as the Red Raiders had four players in double figures, led by Zhaire Smith’s 18 points. That also includes 14 points from Niem Stevenson off the bench. And the Red Raiders had the lead, 35-34, at the break.

Oklahoma State became the aggressor in the second half and went on a 16-4 run in the first five minutes and made that lead stick the rest of the game (cue the court-storming). Lindy Waters III helped fuel the run, scoring 8 of his 18 points during that run. This is what the Cowboys couldn’t do against TCU on Saturday — string possessions with points together.

Kendall Smith scored 21 points and dished out 6 assists to lead OSU. For the Cowboys the win was a big one. It guarantees they’ll be above .500 in league action going into the Big 12 Tournament, a good sign as it tries to reach the NIT. I’m not sure how much the win over Tech will help their NCAA hopes, but the Cowboys do have wins over Tech and Kansas now, so the committee has to at least look at them a little bit harder. I’d be interested to see where the next Bracketology has them fitting in.

As for Tech, it is now a game behind Kansas, but it can equalize things on Saturday in Lubbock. A Tech win would force a first-place tie and give the Red Raiders the tiebreaker since they would have swept the season series.

TCU 89, Iowa State 83: Desmond Bane has been one of the best 3-point shooters in the Big 12 this season, but he doesn’t get much attention. That changed Wednesday night, as he scored 27 points and proved he was more than just a 3-point shooter by scoring just six of his points from behind the arc. Bane’s best work may have come at the free throw line, where he hit four free throws in the final 33 seconds to help protect TCU’s lead.

I’m not surprised that TCU was behind at halftime. Hilton Coliseum is such a hard place to play and TCU’s offense doesn’t always travel. But TCU surged in the second half and finished 57.9 percent from the field and 80 percent from the free throw line. Along with Bane three other players were in double figures, including Alex Robinson’s 18 points.

Iowa State had plenty of chances to win and got a great game out of senior Donovan Jackson, who scored 27 points. Three other players hit double-figures, but guard Nick Weiler-Babb didn’t play. Still, the Cyclones had enough weapons to beat TCU, but couldn’t hit the shots and defend well enough down the stretch to get it done.

Kansas State 58, Texas 48: I know Kansas State is good defensively, but Texas shot 28.6 percent from the floor and 11.1 percent from the 3-point line in this one, and in major college basketball that sort of percentage is inexcusable. This came in a game where Texas committed just 8 turnovers. The Longhorns have been hot and cold all year. When they’re scoring they’re scoring like crazy, but when they’re off, they’re WAY off. Texas was 2-of-18 from the 3-point line. Head coach Shaka Smart should just burn this tape and move on. Dylan Osetkowski had 10 points and 10 rebounds.

Kansas State didn’t shoot a great percentage (41.7 percent), but when Texas shoots the way it did you don’t have to shoot that well. Xavier Sneed scored 9 points and grabbed 13 rebounds. Dean Wade scored 13 points and had 4 blocks. Barry Brown Jr. led with 16 points. K-State pulled away in the second half of this one and solidified itself as a Top-4 team in this conference.

I’m just going to throw this out there — why am I starting to feel as if the Big 12 Tournament title game will be a third Sunflower State game? Discuss.

Looking ahead to Saturday: All eyes will be on Lubbock, Texas, and whether the Red Raiders can sweep the season series with the Kansas Jayhawks and take the lead in the final week of the Big 12 regular season.