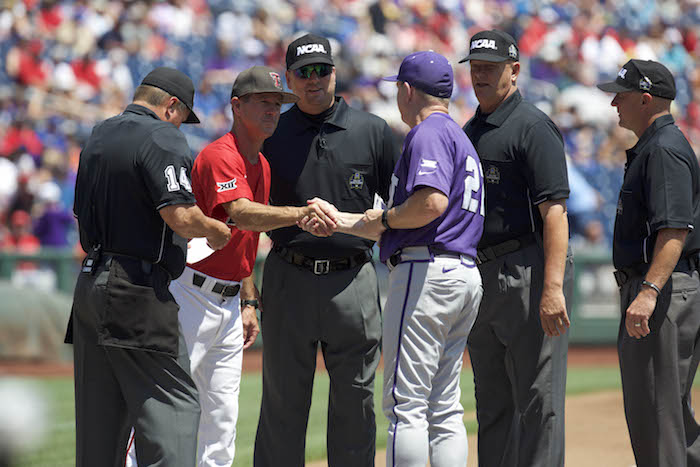 As we continue to attack the Big 12 baseball season in full force, here is our first ever “Big 12 Baseball Weekend Preview” from our Big 12 baseball expert Cameron Brock. Find him on Twitter: @CamBrockVoice.

LSU might not be the premier team in Louisiana this year. What if Texas has already played that team (Louisiana Lafayette)? Regardless, Texas is going to Baton Rouge licking its chops. LSU dropped a home series to an unranked Notre Dame team. This is a Notre Dame program that hasn’t had a winning season since 2015. LSU, a cream of the crop program, is struggling out of the gates. They were outscored 27-15 against Notre Dame. We know Texas has the pitching staff. The question is: How good is this offense? They showed up against UL Lafayette. The Ragin’ Cajuns may actually be better than LSU. The season is early. We’ve only seen one week. Looking at those LSU ERA’s though, I’m alarmed if I’m a Tigers fan. It’s abhorrent.

Then again, Texas was 6-11 in true road games last year. Have they improved their road woes? There are a lot more questions to be answered in this series, than there is talent to watch. That’s unusual for a meeting between these two. It will be fun. Alex Box Stadium is always rocking. Texas and LSU fans will probably provide the best atmosphere in the nation this weekend. If you can, definitely watch it.

What was supposed to be a key early matchup has lost a bit of its luster. Long Beach State opened up against Saint Mary’s and dropped the series at home. Add in a loss to USC midweek, and the Dirtbags (yes, that’s the baseball team’s nickname) are in a bit of hole. Add in the fact that they play in a top-heavy Big West Conference, and these guys have their backs against the wall.

Meanwhile, TCU has one of the best 2-1 records in the nation. A rising university called Grand Canyon has been excelling in every sport during their reclassification to Division 1. They won the WAC last year, but are ineligible for postseason play due to the transition. TCU went to Phoenix, and humiliated the Lopes. On Sunday, Grand Canyon needed 12 innings to score a victory against the Horned Frogs at home. TCU is good folks, and they can damage the Big West this weekend. If you’re a fan of any Big 12 Conference team, especially those who are picked to finish in the bottom half, you are a diehard TCU fan this weekend. The Big 12 wants TCU to burst the Big West Conference’s bubble before the soap has even mixed with the water.

Expectations should not be high this weekend for Baylor. In fact, don’t be surprised if they get swept. UCLA hasn’t been tested yet, but they have an offense that put up 37 runs in its first four games. Baylor was inconvenienced opening weekend when Purdue could not travel south due to weather. Mother Nature also cancelled a midweek game against Dallas Baptist. Houston Baptist made the short drive up to Waco, and was able to steal a game. Baylor ace Cody Bradford got off to a fabulous start this season, allowing one hit and one walk through eight innings of work during a 1-0 victory. He earned Big 12 Pitcher of the Week. The problem with Baylor isn’t hitting. It’s scoring. Baylor left 27 runners on base against Houston Baptist. If the Bears want to win at UCLA this weekend, they must cash in those runs.

This question is being asked everywhere. How big of a blow to Texas Tech is Steven Gingery? Well, it’s certainly a blow to the team’s National Championship hopes. However, Tim Tadlock has built a monster in Lubbock. Gingery pitches once a week. Now, if Tech continues to fall to the injury bug, they’ll be like the 2017 TCU squad. Out of five games, Tech has scored at least 12 runs in four of them. This offense leads the nation in the most important category. Tech has 11 more runs than any other team in the nation. Now, we have to see if those offensive numbers will continue as the competition stiffens. UTSA is better than Maine and New Mexico State. This is a team that took two of three against a West Coast Conference team. And the Roadrunners have offense too, scoring at least 11 runs in their two victories. Statistically, this should be a slugfest. In eight games, they’ve combined for 15 home runs. That’s nearly two per game. The question is: How will these hitters fare against tougher pitching? Both teams are elevating their competition this week.

Northwestern is bad. I mean, this team is just downright awful. They dropped a neutral-site series against Omaha, a team that finished 12-40 last season. That same Omaha team was picked to finish ahead of only Fort Wayne, who went 9-43 in 2017, in The Summit League this season.

After Kansas dropped a game to Murray State, they’ll need to sweep Northwestern for RPI purposes. The Jayhawks don’t want to be a bubble team again this year with a weak non-conference schedule. Of course, to win in the Big 12, they’ll have to clean up their defense. During a cold day at 44 degrees, the Jayhawks committed four errors and five wild pitches during a 10-5 loss against Murray State. Sure, this team is young. However, they are way too experienced for that type of performance. The cold weather may have had an effect, but this weekend’s forecast shows similar weather at a high of 49 degrees on Sunday and cloud cover throughout the weekend. Spectators beware. You may be in for more laughter and face palms than cheering this weekend.

The Wildcats have shown about what we’ve expected through one week so far. They are 0-2 vs. Top 25 teams, lost on the road against the 2016 NCAA Champions (Coastal Carolina), and have won two straight against teams they should beat.

This week, they could sweep on the road. That would be huge, but don’t hold your breath for it. T.K. McWhertor made his presence felt with a home run against South Alabama in his debut at-bat. At this point, Kansas State is just trying to rack up wins and improve throughout the season. It should be a big confidence boost if the Wildcats can win 13 of their next 17 games. That would place them at a total of 15 wins when they open up conference play in Fort Worth.

We aren’t too certain how good either of these two teams are. Marist was swept by Furman, but five of their regular starters are hitting over .300. Meanwhile, Oklahoma State scored a series victory on the road against Texas State. The one loss was a complete disaster with a 10-1 score. In that loss, Oklahoma State committed five errors. This is similar to what we saw from a young team last year. If the Cowboys are to compete, they must clean up their defense.  The goal for Josh Holliday’s team this weekend should be zero errors.

Oklahoma scored the opening day victory over a ranked Indiana team at a neutral site. It’s been downhill from there. They lost in extra innings to solid ball clubs in South Alabama and Coastal Carolina. However, the 14-6 loss to one of the worst ACC teams in Virginia Tech capped off a frustrating weekend for the Sooners. This week should be a breeze though. Oklahoma is at home and playing two teams who spend more time shoveling snow in January than fielding baseballs. If the Sooners are anything but 5-3 after this weekend, you better hope its due to inclement weather.

One a side note: Holy Cross went to Houston and upset a Top 25 ranked Cougars team on Opening Day. Meanwhile, Valparaiso hardly competed while being swept at Alabama.

Holy Cross Player to Watch: Thomas Rosso (The only regular starter with over a .250 average. He’s hitting .400 and scored three runs.)

Let’s flashback one year ago. West Virginia looked like the worst team in the Big 12 Conference after dropping a series at mediocre Conference USA team Charlotte. The Mountaineers turned it around the next week, won four games at this very same tournament, and nearly hosted an NCAA Regional. Could we be in for more of the same? It will be interesting. VCU and Illinois are subpar teams right now. VCU got swept at Liberty. Illinois battled Mother Nature and split games against South Dakota State and Austin Peay. Coastal Carolina is the clear favorite in this tournament. They already have two victories against the Big 12 Conference after beating Oklahoma and Kansas State. They’d love to get revenge against this West Virginia squad after falling to them last season.

Big 12 reprimands Bob Huggins for ripping officials
Texas Tech vs. Kansas Ranks Among the Hottest Tickets in the Country
To Top