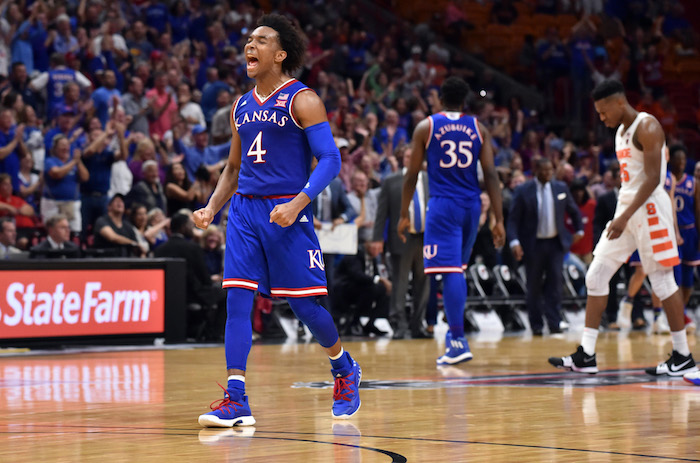 It was the biggest game in the Big 12 basketball season on Saturday. Hell, it was one of the hottest sports tickets in America this past weekend. The blue blood Kansas Jayhawks went on the road to play Chris Beard’s up-and-comers in Lubbock, Texas, in a showdown that was likely to determine who would end up as the Big 12 champion.

The Jayhawks went on the road to what has become, at times, a hostile environment in the United Supermarkets Arena and beat the Red Raiders 74-72 to give KU its 14th-straight Big 12 championship. In what was a topsy-turvy, deep year for the Big 12 conference, the Jayhawks kept the streak alive, and Devonte’ Graham turned out to be the biggest reason why.

In many ways, Saturday was Graham’s finest moment, as he scored 26 points, with four assists and three rebounds in the victory. He also hit the tiebreaking jumper with 1:30 remaining to help Kansas to its fourth-straight win and a two-game lead over the Red Raiders with two to play.

But that’s the story of this 2017-18 campaign for KU, as Graham has been exactly the kind of senior leader Bill Self needed this season.

Sure, Oklahoma’s freshman stud Trae Young has put up gaudier stats, has his own ESPN ticker, has been compared to Steph Curry, has the 40+ point games and the 30-foot three point bombs, but the Sooners have played horrible basketball for the better part of the past six weeks. It’s not all Trae Young’s fault, but he’s tried to do too much too often, and there’s a reason the Sooners rank last in the Big 12 in turnover margin (-2.8).

Yes, Trae Young will probably be a lottery pick in the NBA Draft, while Devonte’ Graham might be fighting for a roster spot, but that’s not what the Big 12 Player of the Year Award is about.

When the Jayhawks were plodding their way through Big 12 play with a team that lacked experience and leadership, it was Devonte’ Graham who played all 40 minutes of every game from January 16th to February 17th, a ten-game stretch. He received five minutes off against OU last week (which by the way, the Jayhawks dominated by 30 points in a head-to-head match up between Graham and Young), and then it was back to 40 minutes against the Red Raiders.

As a senior, Devonte’ Graham is not the sexy headliner who is going to lead SportsCenter on a given night. People want to see the star freshman. That’s more of an indictment into what society has become, that probably isn’t suited for this column.

But just because people are blinded by celebrity, and immediate gratification and results, doesn’t mean it should affect where Devonte’ Graham stands in the eyes of the Big 12 voters for Player of the Year.

On top of that, winning must be a factor in this award. Had OU not fallen off a cliff, maybe this race is tighter. But while Kansas enjoys another Big 12 title, Oklahoma has wilted, losing seven of eight games before beating Kansas State on Saturday.

Speaking of Kansas State, even its head coach, Bruce Weber, admitted winning has to be a factor in the award, saying on Saturday, “To me, the Big 12 Player of the Year’s from the people that win the league. That’s just me. Winning is what dictates who should be the Big 12 Player of the Year, but that’s my opinion. Everyone has different opinions.”

And that’s coming from the head coach of one of Kansas’ most-hated rivals.

Lastly, Devonte’ Graham’s affect on this team will be felt next season and even during the 2019-2020 campaign. This is not Bill Self’s most talented team. There’s no one-and-done star like Josh Jackson, Andrew Wiggins or Joel Embiid. That player does not exist on this roster. Maybe Billy Preston would have been that player, but he never got to suit up in Lawrence and ended up playing in Bosnia. So this group turned into a very solid basketball team led by seniors like Graham, and Svi Mykhailiuk, junior Legerald Vick and rapidly improving sophomores Udoka Azubuike, Malik Newman, Mitch Lightfoot and Silvio De Sousa.

In many ways, Graham has taught this team leadership, professionalism and maturity in ways that should not only pay off come March, but also pay huge dividends next season when this impressive sophomore class becomes juniors, and possibly even the season to follow.

Devonte’ Graham put this team on his back in a season where the Big 12 had unprecedented depth and when it needed him most.

He delivered. And for that, he should be delivered the Big 12 Player of the Year award.