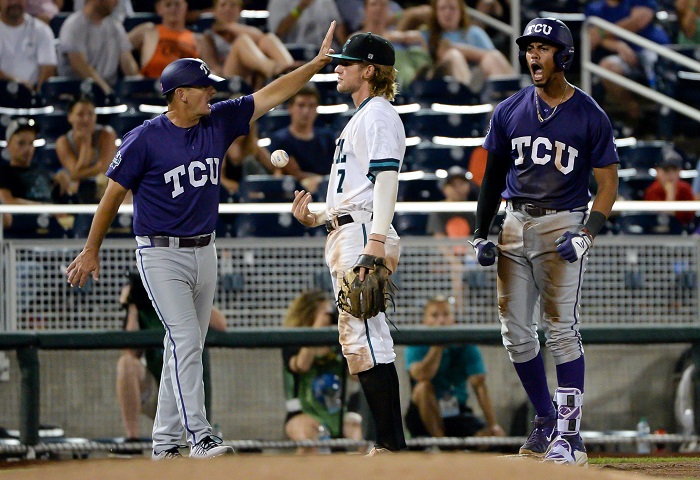 As we continue to attack the Big 12 baseball season in full force, here is our second “Big 12 Baseball Weekend Preview” from our Big 12 baseball expert Cameron Brock. Find him on Twitter: @CamBrockVoice.

This could be the coming-out party for South Alabama. Many of the college baseball junkies already know about them. However, the fan who pays zero attention to Conference USA (Perfect Game has them unranked) baseball might learn a thing or two about them this week. How good are they, exactly? Well, Oklahoma and Kansas State were provided with rude awakenings from them opening weekend. Texas Tech is a much different beast though, and going to Lubbock is one of the toughest tests any team can go through.

The main key in this series will be Texas Tech’s pitching. South Alabama sports a high-octane offense, but it still doesn’t match Texas Tech’s in many categories. When comparing the pitching staffs, there is a clear advantage. Tech’s 1.89 team ERA is well ahead of South Alabama’s 3.59 ERA. It’s also worth noting that Tech has yet to face a ranked team this season. South Alabama has already faced four ranked teams and sports a .500 record against them.

I definitely see Texas Tech falling victim at least once this series, but I still expect them to win it. It’s the strongest test either team has faced this young season. This should be one of the best series in the nation this weekend.

Mother Nature really did not want TCU to play UT Arlington. That midweek matchup was postponed three times before TCU run-ruled the Mavericks 14-1 Thursday night. Maybe next time, the two schools should consult with Jerry Jones about playing in The Star. That would make it a bit more entertaining.

You know what is also entertaining? The mascot names in this matchup: the Anteaters vs. the Horned Frogs. I like it. However, the baseball played on this field should out-entertain everything I have already mentioned. These are two programs who have been to Omaha recently. UC Irvine is currently in rebuilding mode, and will likely continue that trend as coach Mike Gillispie announced he will retire after this season. Only four starters return to the lineup from last year. Despite this, they are off to a nice start with midweek victories over San Diego State and Loyola Marymount. However, they’re visiting Lupton Stadium. We all know about the Lupton magic. On paper, TCU throttles these guys. However, when a College World Series caliber program brings in a bunch of newcomers, you never know what to expect. Remember, Tim Tadlock basically gutted his team after his first season at Texas Tech. They went to Omaha in his second year.

Two first-year heard coaches will send their teams out for battle after extensive years as extremely successful assistant coaches. Skip Johnson’s tenure has gotten off to a rocky start. In fact, Brad Bohannon’s Crimson Tide has to be licking their chops at the fact Oklahoma lost to Valparaiso. Alabama opened up their season with a 3-game sweep of the Crusaders. The Sooners offense is in a complete funk. As you can see in the players to watch, two of the Sooners’ best hitters from a year ago are struggling mightily. Normally, I go with players who are having good current seasons, but Cade Harris is the only Sooner hitting over .300.

Oklahoma desperately needs to get out of its groove, and the Big 12 could certainly use a Sooners series victory.

For these two teams, it’s been frustrating at times. Oklahoma State has committed seven errors in its two losses. When it rains it pours. However, the 5-2 start certainly provides relief to Cowboys fans. Meanwhile, storied program Arizona State is off to a less-than-stellar start. This team split a home series against MAC team Miami (OH). They have yet to win a series this season. It’s not something Sun Devils fans are used to. Even with a losing record last year, they started off with a sweep of Northwestern.

The problem for the Sun Devils is their youth. They have over 20 underclassmen on their roster. If the Cowboys can escape Arizona with a series victory, it would be an excellent start to the NCAA resume. Tack that on to the one road victory Baylor scored over UCLA and that would clearly place the Big 12 over the Pac-12 in the eye test.

What a mess! I’ve been to Alex Box Stadium before. It’s one of the absolute best sports atmospheres I’ve been in. It’s even better than the majority of football stadiums. If you doubt me, then go there and see for yourself. You’ll thank me later. That being said, if Stony Brook can go to Baton Rouge and win a Super Regional, Texas can certainly handle the atmosphere at LSU. Five errors were committed by this Longhorns defense. Three of them came on Friday night with Nolan Kingham on the mound. Defense should be second nature at this level, yet Texas finds themselves on the wrong end of a big-time road series. Luckily for the Big 12, they were able to salvage the weekend with an 11-1 Sunday victory.

Now for a break, or at least conventional thinking would say so. The Longhorns host a four-game series against a really bad Northwestern team. Sure, the Wildcats scored 18 runs in a game at Kansas. However, that Kansas defense committed four errors and deserved to lose. This Northwestern team dropped a series against an Omaha team which lost 40 games in 2017. Anything but a sweep this weekend is a disappointment. If they split the series, consider it a disaster. If Texas somehow drops this series, cancel the rest of the games.

This should not be a pretty series. Texas Southern seems to be making improvement. They committed at least one error in their first seven games. That streak was snapped Tuesday during a 4-3 loss just a short walk from Texas Southern to the University of Houston’s Schroeder Park. The Cougars won in walk-off fashion.

In my Kansas season preview, I said if the Jayhawks lose more than twice in their first 11 games, it would look really bad. Well, it already looks kind of bad. Now Kansas needs to sweep this series to get through these games with that exact mark (one game was cancelled due to snow). Kansas is an experienced, talented team. This series should be a breeze. However, if the Jayhawks commit four errors like they did during an 18-12 loss to Northwestern, even a SWAC team can beat you.

La Salle has a new coach, and he’s off to a solid start. The Explorers haven’t finished with a winning season since 2011, and have lost at least 39 games in each of the past two seasons. Having Big 12 talent against that kind of program should mean an easy sweep.

Kansas State needs to sweep this series. They need to rack up as many non-conference victories as they can. La Salle has been awful on defense this season. Through their first six games, La Salle committed 14 errors. They enter this series on a two-game streak without committing an error. The Explorers have surrendered at least four runs in every game except one: their most recent game which was a 12-1 victory over Maryland-Eastern Shore.

Needless to say, Kansas State needs to capitalize on a mistake-prone team. This is a must-sweep if the Wildcats are to compete for an NCAA Regional.

West Virginia was unable to reproduce their results from one season ago in week two. Now, they are really far behind. This week, they are 221 in RPI rankings. This team was supposed to be better, but this slow start has killed any momentum from last season. VCU defeated them twice in Conway, South Carolina.

Baylor (3-3) at Frisco College Classic Vs. Cal, No.10 Texas A&M and Louisiana Tech

Baylor exceeded expectations in Los Angeles by scoring a victory in Jackie Robinson Stadium. However, Bears fans should be disappointed. Baylor should’ve won this series, but a bullpen meltdown cost them the opener. It is notable to point out that ace Cody Bradford tossed over 100 pitches in just five innings of work. He certainly did a solid job in those five innings, and has yet to surrender a run this season. However, five innings is hardly a start.

They’ll get to boost the Big 12’s profile this weekend. First off is Cal. While the Golden Bears have a winning record, it’s deceiving. They are a bad Pac 12 team. Four of their five victories come against an even worse Cal State Bakersfield squad. However, Saturday is against Texas A&M. The Bears pulled off a massive upset against the Aggies during the 2017 Shriners Hospitals For Children College Classic in Houston. Looking at A&M’s schedule, they’re setting themselves up for a similar result. While Baylor has seen top-notch pitching against UCLA, Texas A&M has accrued a 9-0 record against creampuffs. The most dangerous team for Baylor in this series is the devil they don’t know: Louisiana Tech. This was a 36-win team under a first-year head coach in 2017. However, the Bulldogs also lost 15 starters, including three MLB draftees. No one knows how good or how bad this team is. With it being a Sunday game, anything can happen.

The expectation for this weekend should be a 2-1 outing with a loss to Texas A&M. It would not be surprising to see the Bears go 3-0.