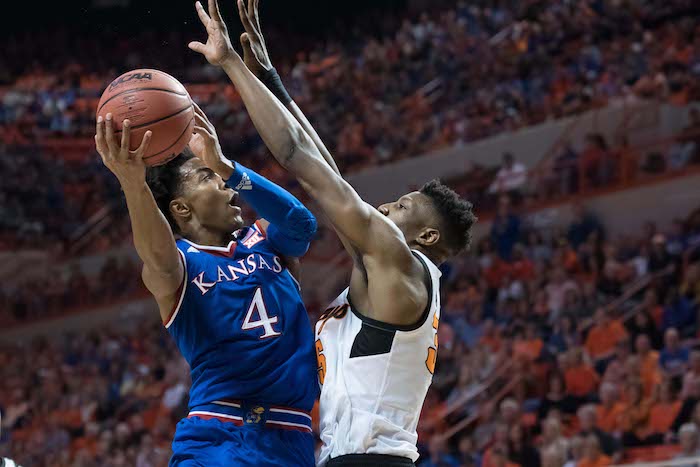 By popular demand, it’s time to bring back the Power Rankings. We did them throughout the entire football season as our staff voted and then we averaged each contributor’s rankings out to come up with our official rankings one through ten. And just like that, the regular season is in the books! So here we go with our Power Rankings ahead of this week’s Big 12 Tournament in Kansas City.

Well, the Jayhawks did in fact make it 14-straight Big 12 title this week with a win over the Longhorns. KU ended up losing by 18 points in Stillwater on Saturday, but does anyone think this team looked all that motivated in the game? I sure didn’t. Amazingly, it looked like a month ago KU could be knocked off, but they still go on to win the conference by two games. The Jayhawks are the class of this conference, until someone else proves otherwise.

The Mountaineers lost a tough road game on Saturday in overtime against the Longhorns, but they close the season tied for second in the Big 12 conference, while winning three of four games and four of six. That included a mid-week win over the Red Raiders on Senior Night for Jevon Carter and Daxter Miles Jr. After a tough January, it looks like Bob Huggins’ squad is trending in the right direction at the perfect time. Plus, having veteran and tested guard play in March is an important element for any team to have during a chaotic tournament.

The Red Raiders snapped their four-game losing streak with a win over TCU on Saturday. Keenan Evans finally looked like himself in the second half of the game when he scored all 23 of his points against the Horned Frogs. Evans’ injury was a huge blow to Texas Tech’s chances of taking down Kansas for the Big 12 crown. But now it’s just time for the Red Raiders to focus on what’s in front of them: a nice run in Kansas City and then potentially 3-4 NCAA Tournament games? Let’s see what these newcomers can do.

OK, so Kansas State is still a bubble team? (Insert hand on chin emoji). I’m so confused. Sure this team lost all its games to Kansas, Texas Tech and West Virginia, and dropped two of three to end the season at Oklahoma and TCU, but finishing in sole possession of fourth place in the deep Big 12 conference has got to be worth something. The Wildcats don’t do any one thing incredibly well, but they do a lot of things pretty well. Everyone is overlooking this squad.

The Horned Frogs had their four-game winning streak snapped on Saturday against a Texas Tech team that was looking to break out of a funk. More importantly, TCU had won four games in a row in conference play for the first time in 20 years. It’s also been 20 years since this team reached the NCAA Tournament. Kenrich Williams is proving to be a double-double machine and his senior leadership should be very valuable in the coming two weeks.

After a five-game winning streak, the Bears close the season with three losses in four games, falling to WVU, at TCU and at K-State. Scott Drew won’t win it, but should get some consideration for Big 12 Coach of the Year. Baylor started off Big 12 play 2-7. They closed the season going 6-3. Considering the rough and tumble Big 12, it would have been easy for the Bears to start coasting. This team did not and now they are solidly in the NCAA Tournament, at least according to all the bracketologists I’ve read.

Texas is on of four teams in the Big 12 that ended conference play with an 8-10 record. So, are the Longhorns in the Big Dance? Joe Lunardi thinks so. UT can thank their big overtime win against West Virginia on Saturday. UT won the game despite a boneheaded decision from Shaka Smart to call a timeout when his team had one free throw remaining in the final seconds and WVU was out of them. Stupid. But Smart’s team bailed him out and now it looks like they’ll be dancing in March. Just don’t lose that pesky game to Iowa State on Wednesday night in Kansas City…

Who swept the Kansas Jayhawks this season? Yep, these guys! Congrats to the Cowboys, even if the Jayhawks didn’t appear to be overly motivated on Saturday following a 14th-straight Big 12 title. The Cowboys also finished 8-10 in Big 12 play and won three of their last four games. But they’re not yet in the NCAA Tournament. However, they have a great chance this week when they’ll play Oklahoma on Wednesday and then potentially Kansas again. If the Pokes don’t end up in the Tourney, they can blame a weak non-conference schedule.

The Sooners followed up a six-game losing streak by winning two of three to close the season. The defense has played better, as OU has allowed less than 70 points in three of its final five games, but this team still has a handful of issues. Most notably, it never really became a “team”. It is Trae Young and a bunch of guys. OU still hasn’t won a road game since December, but I suppose it just takes one hot hand from Trae Young next weekend to push the Sooners into a Sweet 16 appearance and then roll the dice from there. I’m sure 99% of Sooner Nation would sign up for that right now.

The Cyclones close out a disappointing season with six-straight losses. The good news is that it’s all about the future with this team. Lindell Wigginton was named to the Big 12 All-Newcomer team over the weekend. There’s a bright spot for Iowa State fans. Outside of that, Cyclones fans can look back on this season as a rebuilding year that hopefully pays major dividends come the 2018-19 season and beyond.