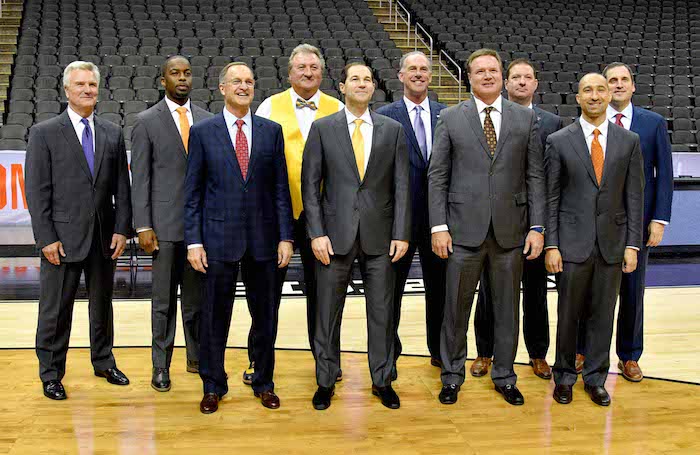 As we get ready for the Big 12 Tournament starting on Wednesday night, let’s take a closer look at a few things to keep an eye on this week. Some teams are still battling for NCAA Tournament bids, while others are looking for seeding improvement. Regardless, thanks to the depth of the Big 12 conference, it should be a fun week in Kansas City!

1. Win and in for Oklahoma State?

This is one of the best storylines to keep an eye on. Currently, Joe Lunardi, the King Bracketologist, has eight Big 12 teams making the NCAA Tournament, with only Oklahoma State and Iowa State on the outside looking in. The Cyclones aren’t making it unless they run through and miraculously win the Big 12 Tournament. But Oklahoma State still has a shot. One win over an Oklahoma team that Lunardi has as a 9 seed might do it? Two wins over Oklahoma and then Texas Tech would most certainly get the job done. Despite OSU’s two wins over Kansas, Lunardi says the Pokes are out because of their weak non-conference schedule. Well, the good news about the Big 12 is that there’s so much depth that Oklahoma State can still play themselves into the Big Dance.

Also, this would give the Big 12 nine of ten teams in the NCAA Tournament. It would be the most teams of any conference to make the Tournament, and a ridiculous 90% of the conference.

2. Is Texas in a must-win situation on Wednesday night?

Lunardi lists Texas as one of the last four teams in the NCAA Tournament. Could Iowa State spoil those chances with a win over the Longhorns on Wednesday night? Shaka Smart has said he still doesn’t know the status of Mo Bamba for this week’s Tournament. Plus, Iowa State always turns out in force in Kansas City for the event. Might this year be a little different since the Cyclones finished in last place? We’ll know by Wednesday afternoon by checking out the scene over at the Power & Light District. But I expect a lightly-traveled Texas fan base, with possibly more Iowa State fans, along with a banged up UT team, which could all spell disaster for Texas on Wednesday night. This would make Smart & company awfully jittery ahead of Selection Sunday.

I’m not certain it requires a Big 12 Tournament victory, because there is still so much up in the air around the country. Lunardi currently has Duke and North Carolina as 2 seeds. If one of them wins the ACC Tournament and Kansas doesn’t win the Big 12, could we see a bump? Or would Virginia just get knocked off the top line, despite their ACC regular season title? Also, Villanova and Xavier are both currently 1 seeds. Unless they both meet in the Big East Championship game, could one of them get bumped down? Xavier seems like the more likely bet to drop off, since Villanova has the No. 1 non-conference RPI in the country. Since Purdue’s season is over, for now, following their Big Ten Championship game loss to Michigan, the Boilermakers are probably a solid No. 2 at this point.

I don’t think Kansas needs to win the whole thing in Kansas City, but I do believe getting to Saturday night is important for Bill Self’s team to maintain a No. 1 seed.

4. How much can West Virginia and Texas Tech improve seeding?

The Mountaineers and Red Raiders are both listed as No. 4 seeds. That’s all well and good, but potentially avoiding a No. 1 seed in the Sweet 16 is always solid incentive for a team to perform well in its conference tournament. The Red Raiders spent the past couple of weeks banged up and ended up with a four-game losing streak that was snapped Saturday against TCU. But Chris Beard got his big contract extension and hopefully things are starting to turn the corner on the injury reports. Meantime, the Mountaineers had won three in a row before dropping their season finale in Austin.

A conference tournament title, with either team beating Kansas, and/or each other, along the way, will probably end up giving one of these two teams a higher seed come Sunday. They are on a collision course to play each other in Friday night’s semifinals, which could ultimately be the game that leads one team to a No. 3 seed, while the other might stay on the 4 line.

5. Does Trae Young have any magic left?

That’s what it would take for Oklahoma to make any kind of noise in the NCAA Tournament. This team has completely floundered down the stretch of the season. Sure, they won two of their last three games. Ho hum. This team is not a “team”. They’re overly reliant on one guy, and that one guy lost some confidence and swagger as the season progressed and as teams began focusing more and more on him. Plus, Oklahoma hasn’t won a game away from Norman since December. Can they change that in Kansas City? It looks like they’re dancing, regardless. But come next week, is there any fuel let in the tank? A win or, preferably, two this week would give us reason to believe that maybe Oklahoma isn’t dead yet.