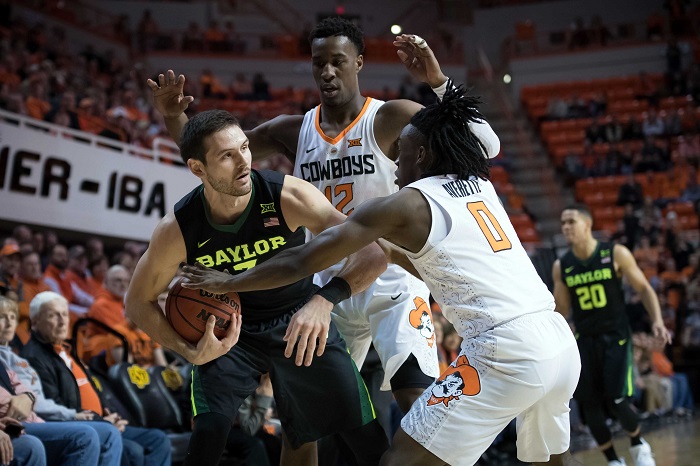 The Baylor Bears were the first team out of the NCAA Tournament on Sunday. So, it makes sense that the Bears end up as one of the No. 1 seeds in the National Invitation Tournament as its 32-team bracket was revealed on Sunday.

The Bears (18-14 overall) ended up as the top seed in the Lower Left Bracket and will host Wagner later this week. By becoming a No. 1 seed, that means the Bears can play at home through the NIT quarterfinals. Baylor is an experienced NIT team, having won the 2013 crown.

It will be a tough bracket for the Bears, as Louisville is the No. 2 seed, Middle Tennessee is the No. 3 seed and Mississippi State is the No. 4 seed.

The Oklahoma State Cowboys (19-14 overall), another Big 12 bubble team, made the NIT as a No. 2 seed and will face Florida Gulf Coast in the first round in the Upper Right Bracket. USC is the No. 1 seed in that bracket, with Stanford as the No. 3 seed and Western Kentucky as the No. 4 seed.

The goal for both the Bears and Cowboys is to get to the NIT Final Four at Madison Square Garden on March 27-29. The defending champion is TCU, which made the NCAA Tournament Field on Sunday as an at-large berth.

Baylor and Oklahoma State were both hotly-debated teams in the final week of the season, and their bubbles burst during the NCAA Tournament selection show.

The Bears’ loss to West Virginia in the quarterfinals of the Big 12 Tournament robbed them of an opportunity to further make their case. Baylor had a three-game stretch in non-conference against Creighton (win), Xavier (loss) and Wichita State (loss), all of which made the NCAA Tournament. In Big 12 action the Bears struggled to start the season but put together a nice February in which they beat Kansas, Texas Tech and Oklahoma, as the Bears won six of their final 10 games heading into the Big 12 Tournament. Baylor, however, wasn’t good on the road (2-9). And while Baylor’s ESPN BPI was a respectable No. 37 ranking, the Bears’ RPI of No. 68 probably helped keep them out of the field.

Oklahoma State ended the season with a No. 57 BPI and a No. 88 RPI, and the Cowboys could boast six wins over ranked teams and four wins over Top 10 teams, including a pair of wins over Kansas, making the Cowboys the first team to sweep Kansas in Big 12 action in the Bill Self era. The Cowboys ended up losing to the Jayhawks in the Big 12 quarterfinals. Plus, Oklahoma State won two of three games over Oklahoma, which made the field, and beat Florida State in December.

Still, the Cowboys weren’t a particularly good road team (3-7) this season and the committee probably took OSU’s low RPI into account, low relative to the other Big 12 teams.