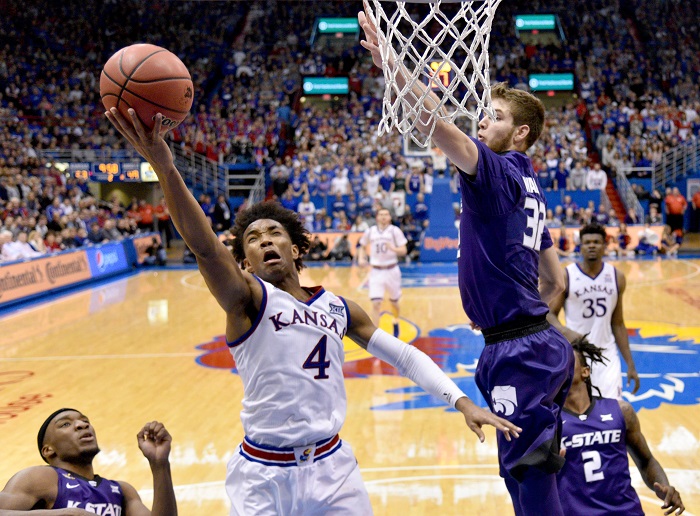 And just like that, we have reached the last of our Big 12 basketball power rankings. Starting soon, we will fast forward to baseball. But for now, here’s our last look at the power rankings on the hoops scene ahead of the NCAA Tournament, which gets underway this week.

And just when you thought the Jayhawks’ streak was coming to an end, they go and win a 14th-straight Big 12 title and then roll through the Big 12 Tournament with relative ease. The Jayhawks have proven that they’re the class of the Big 12 and locked up a No. 1 seed in the Midwest region. KU has won eight of nine games to close the regular season/conference tournament, with five of those wins by double digits. This is not Bill Self’s most talented team, but there is a lot to like about how this team is playing heading into March Madness.

The Mountaineers, once again, reached the Big 12 Tournament title and came up short. But Bob Huggins’ team is in a much better place than it was a month ago. A mid-season swoon saw the Mountaineers lose five of six games. But WVU has now won five of seven games, and is back on track with a veteran backcourt in Jevon Carter and Daxter Miles Jr., along with a force in the middle in Sagaba Konate. The pieces are there for a big run, but WVU doesn’t have that lottery pick-type talent that is often needed to win a National Championship.

The biggest thing for the Red Raiders is that they are back and healthy. Keenan Evans is ready to roll as Tech is sitting pretty with a No. 3 seed and gets to play its first weekend of games in Dallas. Of course, beware of Stephen F. Austin (just ask WVU), but overall, there is a lot to like about Chris Beard’s team. Let’s just hope that the big stage doesn’t get to a group of guys who haven’t spent much time playing in March. This team lost in the opening round last year to Butler and that was the program’s first appearance since 2007.

The formula for the Wildcats is that they beat who they are supposed to beat and lose to who they’re supposed to lose to. Let’s see the health of Barry Brown and Dean Wade this week, but regardless, it’s going to be tough for Bruce Weber’s team to find itself in the Sweet 16. One of the most interesting match ups in the opening round is K-State against Creighton and former Wildcat Marcus Foster, then if KSU can win, hello overall No. 1 seed Virginia.big 12 basketball, big 12 hoops, kansas jayhawks, bill self, kansas basketball, west virginia basketball, jevon carter, daxter miles jr., sagaba konate, texas tech basketball, keenan evans, dean wade, barry brown, tcu basketball, oklahoma sooners basketball, trae young, manu lecomte, jo lual-acuil jr., terry maston,

TCU continues to improve defensively, but one year after winning the NIT, is this team ready to make a little noise in the Big Dance? They do catch a play-in team in the opener, but it won’t be easy with Syracuse or Arizona State. Plus, the Horned Frogs have zero experience on this stage. Last time the Horned Frogs were in the NCAA Tournament (1998), most of the current roster wasn’t even alive.

Texas did what it had to do to get into the NCAA Tournament. Not lose to Iowa State in Kansas City. Now the Longhorns get ready for March Madness, but how healthy are they? That remains to be seen. Mo Bamba played in a loss to Texas Tech last week, which is certainly a good sign. And can freshman Jacob Young keep his offensive output going? Let’s see. For a No. 7 seed, it’s not the toughest road to a Sweet 16 with Nevada and then likely Cincinnati on deck.

Ouch. Sorry, Baylor fans. The Bears were named one of the First Four Out. Splitting their last two games against K-State or West Virginia might’ve been enough. Or a win in any of the other close losses to Kansas, Oklahoma, WVU or TCU in the regular season. Alas, the Bears are headed to the NIT, where their chances to send out a nice group of seniors like Manu Lecomte, Jo Lual-Acuil Jr. and Terry Maston are pretty good.

The Cowboys got the win many thought they needed against Oklahoma to play their way into the Big Dance. But their awful RPI (88th) proved to ultimately hurt them in the eye’s of the selection committee. Even KU coach Bill Self, whose team beat OSU on Thursday in the Big 12 Tournament, said he thought the Cowboys were NCAA Tournament worthy. Oh well. Like the Bears, Oklahoma State will try to make some noise in the NIT. But unlike Baylor, OSU is a young team that can benefit greatly from a deep run and success at Madison Square Garden.

The Sooners are dancing. How? Trae Young. That’s how. At least in my opinion. TV ratings play a part in this, and if Oklahoma can get by Rhode Island in Pittsburgh on Thursday, CBS/Turner get a match up of Trae Young against Marvin Bagley, Coach K and the Duke Blue Devils. Enticing. But can OU even get that far? I find it unlikely. The Sooners have lost eight of their last 10 games and show no signs of turning the corner.

The Cyclones close out a disappointing season with seven-straight losses. But not to beat a dead horse, the good news is that it’s all about the future with this team. Cyclones fans will hopefully look back on this season as a rebuilding year that hopefully pays major dividends come the 2018-19 season and beyond.