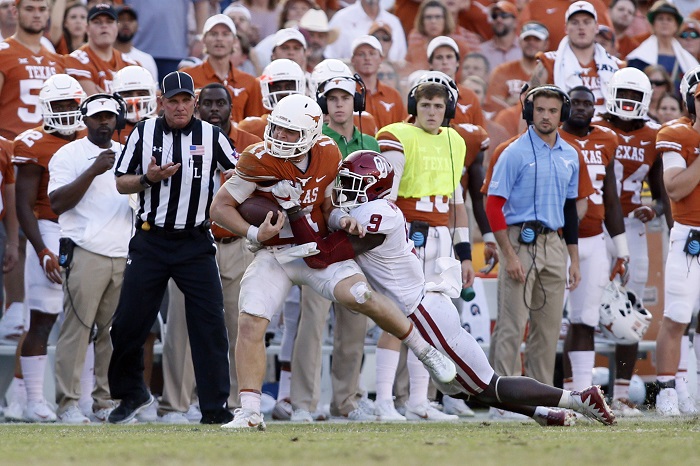 The Red River Rivalry never ends, even when we’re still six months from any kind of game action. This time it was Longhorns QB Sam Ehlinger stirring the pot.

It all started when Texas freshman LB Marqez Bimage tweeted about his improvement in the weight room this offseason.

first joining @yjmcknight strength program I squatted 450lbs. After ending my first offseason of the winter I finished at 610lbs. #itworks

Well Sam Ehlinger took a harmless plug for the Texas strength program and decided to take a shot at former Oklahoma OL Orlando Brown, who had a rough NFL Combine with just 14 reps on the bench press.

Hard work and @yjmcknight will buy you more than 14 reps at the Combine. I can promise you that! #HookEm 🤘🏻 https://t.co/m6b9NTxsxr

Well Kenneth Murray was having none of that, so he decided to take care of business as he saw fit.

It’s well noted that it’s been a rough stretch for the Longhorns, who haven’t won more than nine games since 2009. The last four seasons have concluded with records of 6-7, 5-7, 5-7 and 7-6. As for the Red River Rivalry, Oklahoma has won two in a row and six of the past eight.

Ultimately, it is about wins and losses. But I hope Texas is ready for a turnaround in Year 2 under Tom Herman. That wouldn’t just be good for the Big 12, it’d be good for college football.

But for now, it’s Murray for the win against Ehlinger and the Longhorns, because ultimately, it’s about wins and losses.

Did the NCAA Tournament Selection Committee Get It Right for Baylor, Oklahoma and Oklahoma State?
Oklahoma WR Jeff Badet Would Have Had Fastest 40-yard dash at NFL Combine
To Top