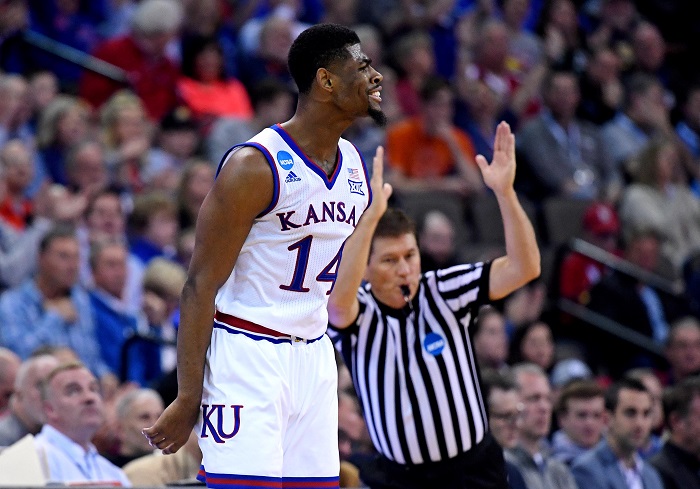 As we enter the Elite 8, we continue with individual posts previewing the upcoming games for the NCAA Tournament games involving Big 12 teams.

How they got here: Kansas won its 14th-straight Big 12 title this season and then went on to win the Big 12 tournament to reach the NCAA Tournament for a 47th time in program history. Duke finished the season 2nd place in the ACC regular-season standings and lost to North Carolina in the ACC Tournament semifinals.

About Kansas Jayhawks: The Jayhawks may not have that one-and-done star, but this is a complete team that improved as the season went on. Devonte’ Graham is a senior leader running the point and the Big 12 Player of the Year. The talent around him is quality and there is plenty of depth off the bench with Mitch Lightfoot, Marcus Garrett, and Silvio De Sousa. It’s the third-straight season Kansas has been a No. 1 seed and 14th time in program history. Azubuike is a force down low and leads NCAA Division I in field goal percentage at 77.4%. Kansas is poised for a deep run and Bill Self would love to remove the notion that despite all his success in Lawrence, his teams have fallen short of expectations come March Madness. On Thursday, the Jayhawks got off to a slow start against Penn, trailing by 10 in the first few minutes. But a 19-2 run late in the first half propelled Kansas to the win over the 16 seed Quakers. Against Seton Hall, the Jayhawks had to grind out a win as Azubuike had a great match up down low with Angel Delgado. In the Clemson match up, the Jayhawks held off a late push from Clemson to beat the Tigers 80-76, in large part thanks to 17 points from Malik Newman to lead the way.

About Duke: Death, Taxes and another deep run for Duke in the NCAA Tournament. Although it is actually the first Elite 8 for Duke since its National Championship season three years ago. That being said, this team is star studded with freshmen, but also has a capable senior running the point in Grayson Allen. He hasn’t quite lived up to the hype that came with his sophomore season, but it’s still good to have a reliable upperclassman to lead this young group. Marvin Bagley is the cream of the crop, as he averages a double-double, and has scored exactly 22 points in all three NCAA Tournament games thus far, while shooting over 70% from the floor. The big stage has yet to get to the 6’11” phenom. Another freshman, Gary Trent Jr. made some clutch free throws down the stretch of Friday’s win over Syracuse. Then there’s Wendell Carter Jr., another freshman who is a projected NBA Draft lottery pick and scored 14 points with 12 boards against the Orange. The Blue Devils have the best offensive efficiency in the country, which should give the Jayhawks plenty of trouble.

Prediction: It’s all about the chalk in the Midwest Region with two blue bloods meeting in the Regional Final. Kansas is going to face a front court with the size it has yet to see in the Big 12 conference. Bagley and Carter are both at least 6’10”, but if KU doesn’t remember to guard the three-point like, the Blue Devils can hurt them there too (ranked third in ACC in 3PFG%). I don’t love this match up for Kansas, since this isn’t the best defense of Bill Self’s tenure in Lawrence. But what I like much more about this Jayhawks team is its poise and more veteran make up than Duke. The key remains how much Udoka Azubuike can handle of Bagley and Carter. If he can neutralize one of the two, KU is in very good shape. But the perimeter defense will have to tighten up for Kansas, to not force Azubuike to help on drives into the lane, which would leave one of the big men wide open down low for an easy bucket. This has the opportunity to be a fantastic regional final, and I’ll take the Jayhawks by a slim margin, thinking some home court advantage in Omaha might help as well. Kansas: 81, Duke 78.

Next up: The winner faces either Villanova or Texas Tech in the Final Four next Saturday in San Antonio.