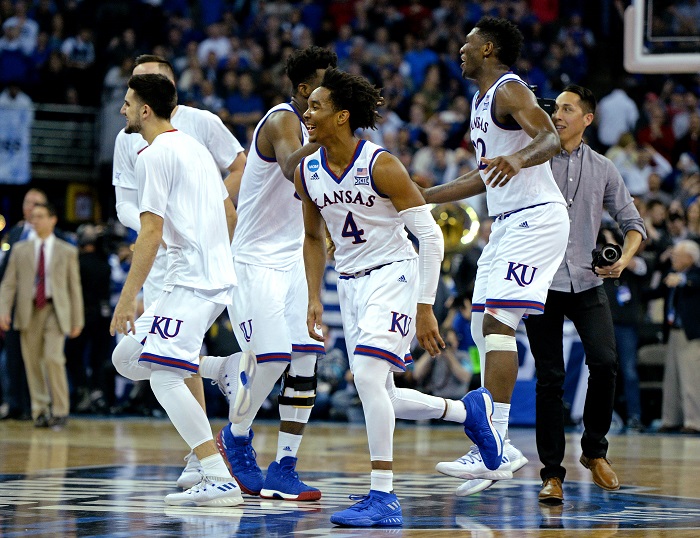 It took five extra minutes, but the Kansas Jayhawks were able to pull off an 85-81 win over the Duke Blue Devils to advance to the Final Four in San Antonio.

The star of the show was Malik Newman, who scored a career-high 32 points on 8 of 19 from the floor and 5 of 12 from 3-point range, while hitting 11 of 12 free throws. Most importantly, Newman scored all 13 Kansas points in the overtime period.

The game, which featured 18 lead changes and 11 ties, got off to a slow start, with no one scoring in the first 1:50. The first half came to a close with the Blue Devils on top 36-33. Trevon Duval, one of Duke’s several outstanding freshman, led the way with 13 points in the opening 20 minutes.

In the second half, KU’s Malik Newman hit two 3-pointers to get the scoring started for the Jayhawks and put Kansas in front 39-37. As a team, Kansas was letting it fly from deep, attempting 36 3-pointers on the night, while hitting 13 (36.1%).

The Jayhawks suffered a scare in the final two minutes when Udoka Azubuike fouled out of the game after hustling down low against Duke’s freshmen big men, Marvin Bagley III and Wendell Carter Jr.

Down three points in the final minute of action, Svi Mykhailiuk hit a 3-pointer to tie the game at 72 with 27 seconds to play. Duke had the ball for the final possession, and a Grayson Allen fade away jumper left of the lank seemed to hit every part of the rim, but did not go down, sending the Midwest Regional Final to overtime.

In the overtime period, Malik Newman’s 3-pointer was an immediate response to Trevon Duval’s lay up, putting the Jayhawks on top 75-74. Marvin Bagley responded with a lay up to put Duke up one, but one minute later it was Wendell Carter Jr. picking up a controversial blocking foul, which was his 5th, sending him to the bench for the rest of the game.

Duke still found itself take a 78-76 lead, but a 5-0 Jayhawks run behind two Newman free throws and then a Newman 3-pointer, put KU in front 81-78 in a lead they would never again relinquish.

Newman was one of four Kansas players to score in double figures. Lagerald Vick had 14 points on the night, while Devonte’ Graham and Svi Mykhailiuk each scored 11. Udoka Azubuike had 9 points and 8 rebounds, while playing outstanding defense.

It’s the 15th Final Four appearance for the Kansas Jayhawks and the third Final Four for Bill Self and first since 2012.  The Jayhawks will face fellow No. 1 seed Villanova in San Antonio on Saturday for a chance to play either Michigan or Loyola Chicago in the Championship Game.

Kansas vs. Duke Preview and Prediction
Kansas vs. Villanova: Five Things to Watch
To Top