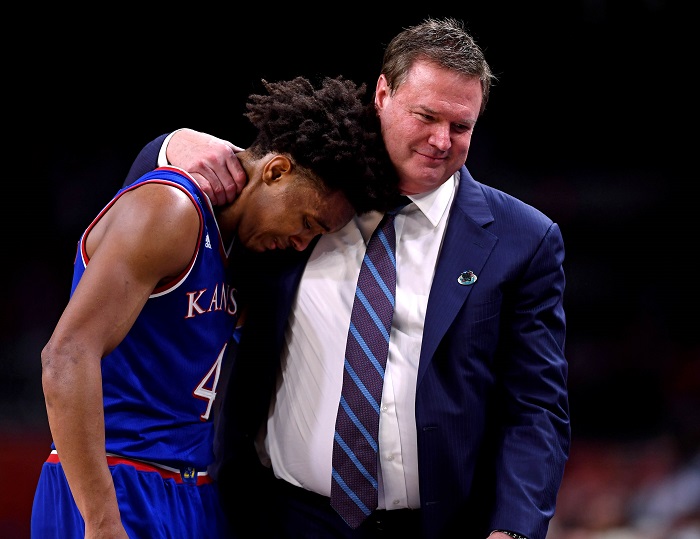 “I’ll think more about how good Villanova was tonight.”

That quote from Bill Self about sums up the night for the Kansas Jayhawks, whose season came to an end with a 95-79 loss to the Villanova Wildcats in the Final Four in San Antonio.

Villanova missed its first two three pointers of the night, but that was not a sign of things to come. Eric Paschall, who had the best game of his Villanova career, got the scoring going, putting Nova on top 3-2, and turned out to be a lead the Wildcats would never relinquish.

Mikal Bridges and Omari Spellman then hit three pointers of their own, and a 9-2 Nova lead led to a Bill Self timeout. After the game, Self said, “When they got up 9-2, I called timeout and thought, ‘we are OK.’ … then it gets to 22-4 and I’m like, ‘oh my gosh, we’re seven minutes in and we need to play perfect to get back in.'”

However, the timeout didn’t help much, as the Wildcats went on a 13-2 run, including another three pointer from Spellman, and then leader and point guard Jalen Brunson hit one from downtown.

A 5-0 spurt from KU led to a Villanova timeout, and the Wildcats got back to business hitting, you guessed it, three pointers on three-straight possessions, to put Nova up 31-15 with 8:47 to play in the first half.

Self admitted after the game, “That’s as good a team as we played against… we got spread out and our game plan went to crap.”

Villanova went to halftime with a 47-32 lead over Kansas. The Wildcats ended the night with a Final Four record 18 made three pointers (on 40 attempts), good for a 45% clip. Eric Paschall’s best night in a Villanova uniform ended with 24 points on 10/11 shooting, with 4/5 three pointers, and three rebounds. It was his most points since scoring 31 his freshman season at Fordham University.

The match up to watch down low was Spellman against Udoka Azubuike. Spellman won that showdown, as the freshman scored 15 points with 13 rebounds, compared to Azubuike’s eight points and five boards.

After the game, Villanova head coach Jay Wright admitted, “I feel bad for Kansas. We just made every shot.”

They did. And for that, the Wildcats are heading to the Title Game on Monday for the second time in three years, where the program will try to win its third National Championship.

The Jayhawks season comes to a disappointing end, but this team exceeded many expectations. It won a 14th-straight Big 12 regular-season title, and reached the Final Four for the 15th time in program history.

Devonte’ Graham and Svi Mykhailiuk leave the Jayhawks program as two of the top four three-point shooters (based on field goals made) in KU history. Meantime, Azubuike has a decision to make as to whether or not he will turn pro.

But Kansas’ future remains bright. The Lawson brothers (Dedric and K.J.), who transferred in, are super talented as they finished a redshirt transfer season, and the Jayhawks have a top five class coming in, highlighted by two five-star players in Quentin Grimes and Devon Dotson.

But for now, the Jayhawks lick their wounds in a game that never felt close. And the final Big 12 team left in the Big Dance has its season come to an end.