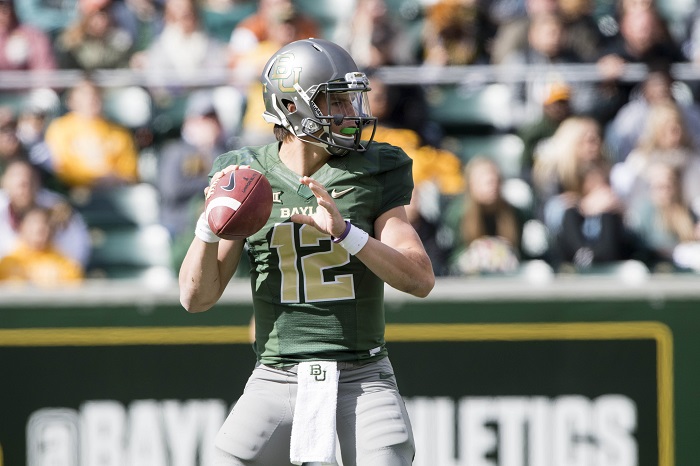 We are back in full swing across the Big 12 as teams are finishing up spring practice and wrapping it up with their spring game. Several teams have already finished up their spring games and we even had two cancellations due to weather. But you’re in luck as two more Big 12 schools will host their spring games this weekend including the Baylor Bears. It’s year two in the Matt Rhule era and after a 1-11 season, Baylor still has plenty of things to work on. Baylor is about to put the final bow on their spring with the spring game on Saturday but before they do, here are the three things to watch during the game.

As I mentioned earlier, Charlie Brewer provided the spark that this offense desperately needed last season. His ability to extend plays and hit his targets helped him earn Big 12 Co-Offensive freshman of the year honors. Charlie’s progression will most certainly be something to keep an eye on and the most important thing is that he stays healthy. Behind Brewer will be true freshman and early enrollee Gerry Bohanon. While Gerry comes in highly rated, I think he will need some time to develop and get used to the level of competition. From practice reports, it appears that Gerry has held his own during spring ball. Both guys will have plenty of eyeballs watching on Saturday and this has to be the lead storyline for the game.

The good news? Baylor returns pretty much their entire offensive line from the 2017 season. The bad news? They gave up 38 sacks last season which was ranked 9th in the Big 12 and 121st in the country. For as much as this unit struggled in pass protection, they were much better run blocking paving some lanes for their stable of backs. The 2018 line will most likely be LT Jake Fruhmorgen (Clemson Transfer with 8 career starts), LG Patrick Lawrence (25 career starts), C Sam Tecklenburg (Converted TE with 12 starts at Center), RG Blake Blackmar (25 career starts) and RT Josh Malin (converted TE with 2 career starts at tackle). So, while this line will have plenty of starts under their belt, C Sam Tecklenburg and RT Josh Malin are still very new to their positions switching from tight end to offensive line last season. If you’re a Baylor fan, this may be the most crucial group to watch.

Baylor will once again lose their best defensive lineman in 2018 with K.J. Smith graduating. Much like the offensive line, the defensive line comes back with some good experience with DE Greg Roberts, NT Ira Lewis, DT Bravvion Roy and Rush End Xavier Jones. Where this line needs to step up is stopping the run. Baylor gave up 4.9 yards per carry to opposing teams and were ranked 9th in run defense in the Big 12. This by far is above and beyond the most important group on the defense. One thing I really want to see on Saturday is how this unit performs especially against the run. Can they be physical enough to shed blocks?

After sitting out the entire 2017 season due to transfer rules, Jalen Hurd is now eligible for the 2018 season. Jalen spent his first 3 years at Tennessee as a running back (2014-2016) before deciding that he wanted to play in an offense that better fits his skillset. Don’t forget that at Tennessee Jalen rushed for 2,638 yards and 20 touchdowns. He also caught 67 passes for 492 yards along with 6 touchdown receptions. If you haven’t seen Jalen play before, the guy is very dangerous in space and can take it the distance on any play when he touches the football. I am very curious to see how the move to WR suits him for the upcoming season. I just couldn’t keep Jalen off my watch list heading into Saturday’s game.