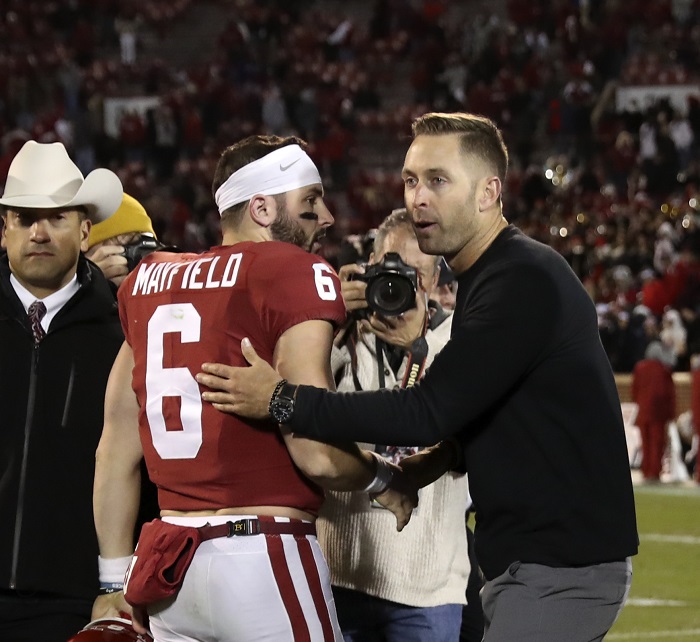 He’s been in the headlines for years. In 2017, he was the face of college football. Baker Mayfield has secured his spot in Oklahoma Sooners history. Some say he’s the greatest to ever put on an Oklahoma jersey. While this is a major stretch, some even believe he’s the greatest to ever play college football. On Thursday, he will likely be drafted as a first round pick to an NFL team.

According to a February Sports Illustrated report, Baker Mayfield declined a scholarship offer to Washington State. He chose to walk-on at Texas Tech, despite being a lifelong Oklahoma fan. Perhaps, a couple of reasons why Mayfield chose Texas Tech was because fellow Lake Travis alum Michael Brewer was a quarterback there. A second reason is that Brewer injured his back, leaving the door wide open for a freshman to come in for immediate playing time. Reason number three may have been that Eric Morris recruited Mayfield to Washington State and was hired off by Kingsbury that same offseason. According to 24/7 Sports, Mayfield also declined offers from New Mexico, Rice and Florida Atlantic.

One of the biggest criticisms of Kliff Kingsbury is that he “never offered” Mayfield a scholarship. Kingsbury repeatedly told media members that Mayfield would be on scholarship starting in the spring of 2014. Mayfield has disputed this claim and used it to play victim in the public eye. This, when in fact, Mayfield had repeatedly declined offer after offer after offer. He declined offers so that he could walk-on at Texas Tech. He declined a Texas Tech offer to transfer to Oklahoma, where he knew he’d be forced to sit out at least one year. There was a rule in place at the time that said transferring in-conference meant sitting out two seasons. Mayfield was able to sit out just one and moaned about it throughout his entire career. Some good did come out of his moaning as the coaches agreed to grant immediate eligibility to non-scholarship players who choose to transfer.

Here’s the reality, and why Baker will fail at the NFL level if he is selected by the wrong team: Texas Tech received a commitment from current Kansas City Chiefs quarterback Patrick Mahomes before Mayfield ever stepped foot on the Texas Tech campus. Mayfield knew Mahomes was an undeniable force. When people say Mayfield is the best in college football, they forget that he would’ve been Mahomes’ backup. All four quarterbacks from the 2013 Texas Tech team transferred to other Division 1 schools. Two of those are going to wind up on NFL rosters. Davis Webb is Eli Manning’s back-up on the New York Giants.

Texas Tech didn’t lose because Baker Mayfield transferred. Tech had six defensive coordinators in a five-year span. I personally asked Kingsbury at Big 12 Media Days on live television (here is the link, 4th question) what he was telling recruits when asked about the lack of stability, and his answer was “blind faith”. The defensive coordinator situation was that awful, and Tech lost three times in 2016 despite scoring 40 or more points. Two of those losses came while scoring 50 points. One of those came against Oklahoma. Patrick Mahomes is better than Baker Mayfield, and would have won the Heisman Trophy in 2017 had he stayed. Tech actually had a decent defense, and that is literally what kept Mahomes out of the Heisman conversation in 2016.

Mayfield knows he’s not the best. He chose to run away from a December 2013 competition with Davis Webb. While it may be a smart move, Mayfield chose not to compete with Patrick Mahomes (let’s face it, Mayfield wouldn’t be in the NFL had he sat behind Mahomes). While he chose to run from competition, he also talks smack about Kingsbury. Mayfield bites the hand that fed him. Kingsbury has breeded NFL quarterbacks throughout his coaching career: Case Keenum, Johnny Manziel, Davis Webb, Patrick Mahomes. Those who didn’t go to the NFL started at other college programs: Michael Brewer at Virginia Tech, Clayton Nicholas at Bowling Green. Kingsbury provided Mayfield a golden opportunity. Mayfield took advantage of it. Webb and Mayfield had a glorious battle for the starting position throughout 2013. Both were injured at various points throughout the season. Mayfield would turn in the worst performance of the two when Tech was slaughtered 41-16 at Texas in the final regular season game. He failed to score, was sacked seven times and was picked off once. Despite this, Mayfield felt he deserved to start in the Holiday Bowl. Kingsbury told Mayfield it would be an open competition. Mayfield decided to transfer to Oklahoma.

Kingsbury has always rooted for Mayfield as a player. “Coach Bro” has repeatedly stated that he hopes Mayfield finds great success and that he wishes nothing but the best for Mayfield. Despite this, he’s been called a “scoundrel” by Mayfield’s father, and repeatedly been demonized by the 2017 Heisman Trophy winner.

Mayfield is currently a bad apple, and if chosen by a team that will start him immediately, he will fail. He may not be a “drunk” like Johnny Manziel, but he does have a similar background coming from a wealthy neighborhood on the outskirts of Austin. The two have similar chips on their shoulders, and both have made gestures that would embarrass most parents.

The best scenario Mayfield could possibly ask for is to serve as a backup where there is proven success at the quarterback position. Oklahoma fans will likely never admit it, but sitting behind Mahomes in Kansas City would be an amazing spot for Mayfield. Kansas City coach Andy Reid is a quarterback whisperer, and has a proven ability to change his player’s lives for the better. Michael Vick is a perfect example of this. Another terrific landing spot would be sitting behind Aaron Rodgers in Green Bay or Tom Brady in New England.

However, if Mayfield goes to a circus such as the Cleveland Browns, his career will become a circus too. He will be the next Ryan Leaf or Johnny Manziel. The Dallas Cowboys would be a bad fit too, as Jerry Jones and Jason Garrett do not groom mature people. Rather, they seem to enable immaturity. If you notice, Jones has gotten rid of all the disciplinarian coaches who did manage to bring out the best in players (Quincy Carter under Bill Parcells anybody?).

Mayfield needs someone who will mold him as a person. Kingsbury would have molded Mayfield. We’ve seen how he’s done with Dakota Allen. Mayfield bit Kingsbury’s hand, ran away, and jumped into the arms of the same Bob Stoops who felt Joe Mixon’s assault on Amelia Molitor wasn’t bad enough to warrant a dismissal.

Mayfield needs a strong mentor. Children already look up to him. He’s right in the middle of the glitz and glamour that comes with the paparazzi. There’s no denying that Mayfield works hard. When he wants to win, almost nothing will get in his way. Unlike Manziel, Mayfield has been able to impress scouts. Earlier this week, our own Pete Mundo found out Broadway Joe is a fan of Mayfield’s ability. But even the best players will crumble in the wrong situations. However, the right situation can prove to be a one-way path directly to Canton, Ohio. Being drafted by the correct team can make or break a player’s career, and this will be especially true with Mayfield.

Regardless of where Mayfield winds up and how his NFL career pans out, he has one person to thank: Kliff Kingsbury.