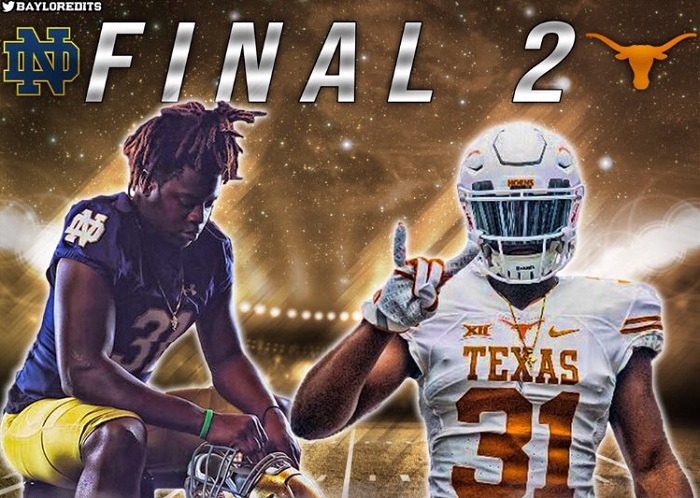 Nana Osafo-Mensah has a decision to make — Notre Dame or Texas. The four-star recruit, per 247Sports.com, was one of the MVPs of the Nike Opening regional camp at Euless Trinity High School in Euless, Texas, on April 29. The Fort Worth Nolan defensive end has a visit coming up to Texas and will made a decision on whether to attend Texas or Notre Dame in May. After his performance at the Opening, he took time to speak with several reporters about Texas, Notre Dame and where his decision-making stands.

You seemed a little extra motivated out there. Did you want that Opening MVP?

I wanted this. I mean it’s the MVP, but it’s not an invite (to the finals) and I don’t have that yet. I was telling my coach before I left, ‘I’m gonna get to the Opening and I’m going bring this (MVP) back to you.’ He’s like ‘All right, we gotta see it.’ To just be able to do this, and all the preparation I’ve had. We had a sports award ceremony at my school yesterday (Saturday). We call it the VESPYs, kind of off of the ESPYs. I really wanted to go, but at the same time I knew I had to get home, get some sleep and come out here. This whole past week has been a struggle, honestly. I’ve been getting five hours of sleep with homework and all of that good stuff. So, I just needed to get ready for this camp. Being able to come out there and compete and to get MVP means so much to me right now. Like, honestly, it’s a dream come true.

You’ve got Texas coming up next weekend. What are you looking forward to there?

After you take that visit, what the process in separating Texas and Notre Dame?

Since they’re both so close, I just ask myself the question, along with my family, ‘Where could you go where, if football was to come to an end for you, that you could still enjoy your four years?’ Each place has pros and cons. Notre Dame is incredibly cold, yes, and I don’t like the cold. But it’s something that I would have to adapt to. Texas can’t provide me an amount of diversity, like Notre Dame does, with a lot of different exchange students from different places. Ninety-five percent (of the students) come from Texas. So, I’ll have to sit down and think about it and see what I come out with.

From an outsider’s perspective it seemed like Notre Dame was surging early, you went to Texas unofficially, Texas kind of surges. Is it really a dead heat going into this last visit?

What are the one our two things over the next couple of weeks that are really going to cement that decision?

For this next visit I really want to see my family’s reaction. My family loved Notre Dame and that was a really good thing. So, I just want to see how they feel about Texas. Even though I know it’s not them going to college, I still really cherish my family and their opinion on where I go to college. I know that this process isn’t just done by myself. It’s done with the support of my family. So, I want them to be able to take some part in it too.

Do they want you closer to home? Have you ever talked about that?

They wouldn’t mind either or honestly. With Texas they could come to just about every game. With Notre Dame, even though my mother and father work a ton, they talked about getting a condo up there, so they could come to the games. So, we’ll see.

Scheme-wise are they similar in what they want you to play?

The positions are pretty similar, it’s just that at UT I would be playing more drops in coverage, some man-to-man and zone types of stuff, exotic blitzes and things like that. Notre Dame is more traditional. It’s a similar pass rush scheme, and you drop back in coverage, but not nearly as much than at UT.

Does the fact that the Big 12 seems like a passing conference play into your decision from the simple fact that you may get more opportunities to rush the passer?

Yes and no. Because It is a passing league and I really do like that about the Big 12. But there are other factors. I was looking at the draft and, obviously the NFL is my dream, but I saw there were only about three players drafted from the Big 12, or nine, something like that — it was a low number. They didn’t say how many from Notre Dame, but seeing those two people go in the Top 10 from Notre Dame seemed like a really big thing to me. As an independent you get a chance to play against so many types of offenses and players.