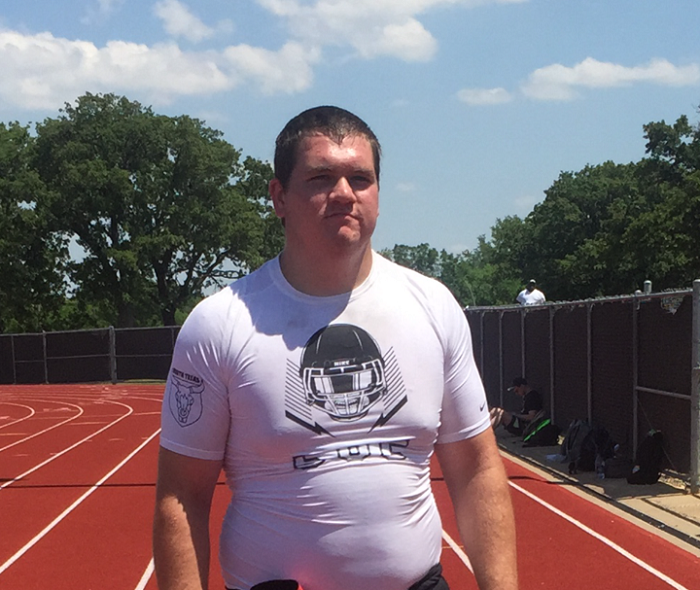 We saw plenty of action on Sunday at the Opening in Dallas. One of those guys was 2019 4-star OL Branson Bragg who is ranked as a top 250 player in the 2019 class according to 247. Branson is a mauler at center for Crandall High School (Crandall, TX) and with 19 offers, everyone would love to have him sign with their school.  After his performance, I was able to catch up with Branson to check in to see where some of these Big 12 schools stand with him. He released a top 8 back in March consisting of, Arkansas, LSU, Michigan State, OU, Oklahoma State, Stanford, Texas and Texas A&M.

HCS: How did you think you did today here in Dallas?

Branson: “It was ok, I had better camps at Rivals camp and Under Armour camp. At Under Armour, I didn’t lose any reps and at Rivals, I got OL MVP even though I lost a few reps there. Today I just wasn’t as consistent. I’m not sure what the issue was but I’m going to watch the film when it comes out, whenever they post it and get better from it.”

HCS: Which Big 12 school sticks out to you the most?

Branson: “I’d say they are all pretty equal. Well, I have to be a little personal to Texas just because I was there last weekend for the spring game. All three of them are super high on my list and all are up there for a reason.”

HCS: How does the Big 12 style of play fit your game?

Branson: “I prefer run blocking, if you watch my film, I love putting people on the ground and jumping on them. You know, you got to do both in the league obviously and whatever school is going to prepare me for the league for academics and athletics.”

HCS: Does it really matter how much a team wins or loses when it comes to your recruitment?

Branson: “It’s not as much about if they win now, its more about seeing them win when I get there as a player. A little bit but not to a huge degree.

HCS: Any date on a decision?

Branson: “I am really taking it slow, I really want to make the right decision and not second guess myself. When I make this decision, I am shutting it all down. I am starting to think December signing day.”