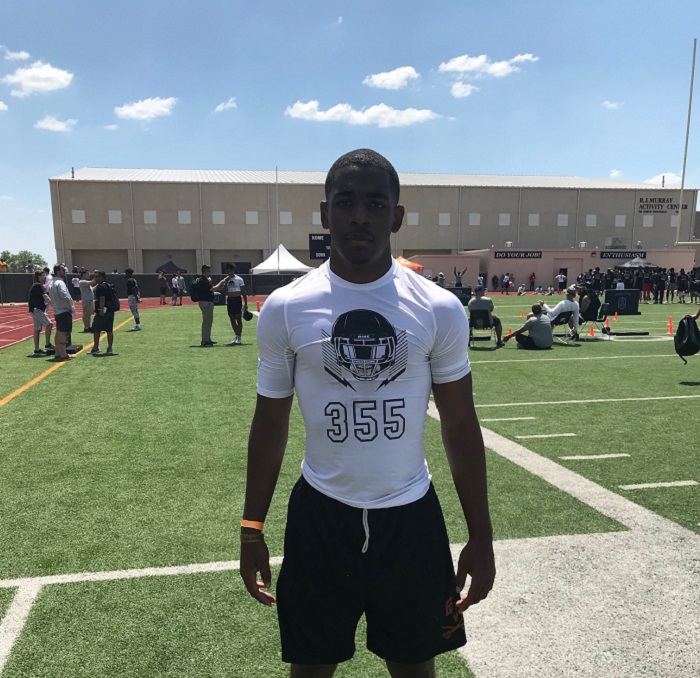 For D’Aunte Prevost, getting the chance to attend The Opening regional camp, put on by Nike on April 29 at Euless Trinity High School in Euless, Texas, was an opportunity to showcase his talent to a wider audience.

The 5-foot-10, 175-pounder from Arlington (Texas) Bowie High School is a member of the Class of 2020, but an invite to the Opening with two years of high school eligibility left means he’s already drawing interest. He has two Big 12 offers, from Baylor and Oklahoma State, per 247sports.com. Additionally, TCU and Louisiana-Lafayette are listed as schools with interest. But right now, Prevost is as concerned with balancing his spring sports — baseball and track — and AAU hoops with his football pursuits. HeartlandCollegeSports.com spent a few minutes with Prevost after his performance at The Opening.

How was the day for you? What was the coaching like out there?

It was great. The drills were great. The coaches were really great. It was a good camp.

What’s it like being out here? You have a couple hundred kids, all trying to accomplish the same thing?

First time being at one of these camps?

No, it was my second camp. But this one was much better than the other one I went to.

What do you feel like you got out of this camp today?

The things they did today, I’m used to doing those things. But my speed was better, my footwork was better. It was great. My footwork improved when we were doing the shuttles and all of that.

You could tell that as you were going along?

You have any other camps you’re planning to go to?

I’m thinking about going to some college camps, maybe the Prime Time camp, things like that.

What do you think about your two Big 12 offers, Oklahoma State and Baylor?

Well there’s those two schools. But I know that TCU is interested in me, along with Arkansas, they’re interested in me. Along with some other Big 12 colleges. So (schools) have been talking to me and it’s been great.

Are you looking to make a decision in December (during early signing) or waiting until the time feels right?

I want to wait until the time feels right. It’s a big decision.

What, to you, constitutes a good fit, in terms of the school you end up at?

You know what? I’m just kind of chillin’ right now. I’m going to be busy this summer with football and basketball.

Yes, I do. I play everything — big man, guard. Wherever. I play with Texas Vision (in AAU) and it’s going great. So, I’m going to be playing both.

Are you looking to play both in college?

If they want me to, whatever college I end up at I’m going to try out (at basketball) and see what I’ve got.

Yeah, I have seen that. Well, I play baseball too and I run track. So, I play everything.

How do you think that helps you? I hear so much about kids “needing” to specialize in a sport. How do you handle it?