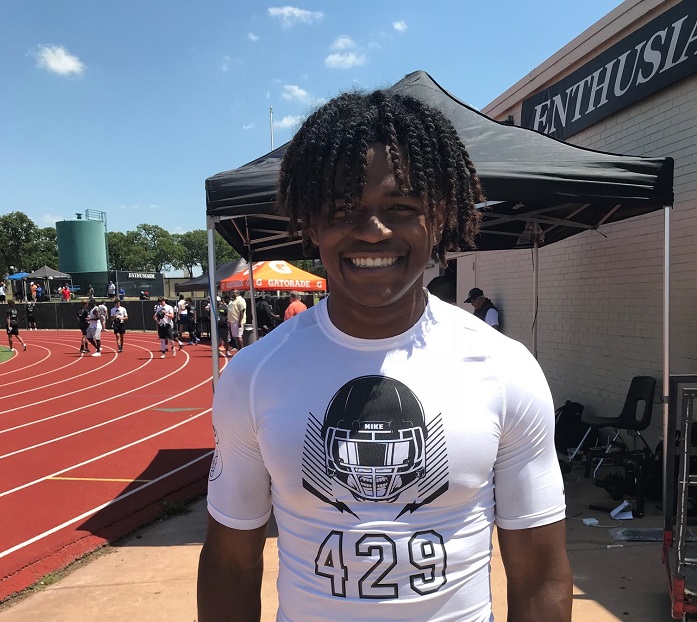 Class of 2019 running back Deion Hankins of El Paso (Parkland HS), Texas took part in Nike’s The Opening regional camp at Euless Trinity High School on April 29. The four-star recruit (per 247Sports.com) already has a pair of Big 12 offers in hand from Oklahoma State and Texas Tech. In addition, Hankins has offers from Arkansas, San Diego State and SMU. Hankins is coming off a 2017 in which he rushed for 2,066 yards and scored 24 touchdowns, his second straight 2,000-yard rushing season in high school.

HeartlandCollegeSports.com spent a few minutes with Hankins after his performance at The Opening.

They had you doing a lot of different things today, kind of rapid-fire. Did it feel like a normal practice or was it at another level from practice?

My high school football practices are at a higher level, but I felt this (camp) was pretty fast, to be honest. They had us doing drills non-stop. I think I only got water two times. But it went pretty well. It was fast and explosive.

What did you feel like the coaching was like? It must help that most of them have coached at either the high school or college level, and that some even played in the NFL?

The coaching was amazing. They go over every single detail in one-on-ones and in group. I learned more about my blocking stance. They said I was lunging at first. But when I put my arms out there and I was able to stay more square, I started to get what they were talking about. But when they told me I was lunging I really didn’t notice it.

What do you have planned for your summer? More camps?

I might go take a couple of more campus visits and some camps. But I need to see what’s out there.

So you have a couple of offers from Oklahoma State and Texas Tech. What do you think about the schools?

I like Oklahoma State for the most part. They’ve got a good coaching staff on offense and I think I’d fit right in with them. Texas Tech has nice facilities, also has good coaches and I would have to see how I play into in their offensive schemes.

Because those programs use their running backs a little bit differently?

They do. I’ve been talking to (Oklahoma State running backs) coach (John) Wozniak from OSU. He’s real close to me. He made the offer to me my sophomore year or the beginning of my junior year.

So, you’ve known about their interest in you for a while. What is it like to get an offer like that and you’re not even a senior?

It was gratifying, knowing where I came from and me trying to help my mom out. Getting a chance to play the sport I love and getting a free education makes things easier for her. And to know that someone else noticed my talent is great.

Have you thought about whether you want to enroll early or not?

I have been thinking about enrolling early because it has a lot of benefits for spring football. When I went to go visit Tech on an unofficial visit they were having a spring practice and I saw a (high school) senior who was already practicing. For the most part, though, I think I’m just going to chill and see what happens. It’s a big decision and I just want to make the right one.