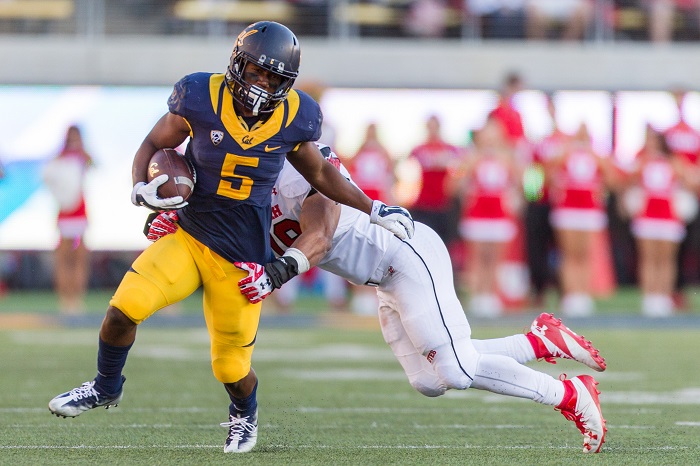 Texas Tech and Texas are in a battle for a solid running back transfer in Cal’s Tre Watson. He only played in two games last season on the west coast due to an ankle injury that kept him out for most of the season. But in January, he announced he would be transferring to use his fifth year of eligibility.

The Lone Star State clearly has Watson’s heart, as he announced he’s down to the two Big 12 schools and has passed on LSU.

I know I said I will announce my commitment today, but I am not ready at this time. I am going to take another day at least to really evaluate the different options. One thing I can say is that I will be living in Texas.

In 2016, Watson rushed for over 700 yards, averaging 5.0 yards per carry with four touchdowns. He’s also solid catching passes out of the backfield, with 21 catches for 241 yards and four touchdowns.

If I’m Watson, I’m going with the Red Raiders over the Longhorns.

First off, let’s look at the competition. At Texas, he will have a crowded field with Daniel Young, Toneil Carter, Kyle Porter and incoming freshman All-American Keaontay Ingram. One can argue that the three returning players aren’t big-time playmakers who Watson could easily beat out. Maybe so, but we haven’t seen any of them reach their potential, in many parts thanks to an offensive line that had lots of issues last season. And this year, the question marks are only greater.

They may be talented individually, but the unit is thin. In the spring game last month Texas didn’t have the depth to field two separate offensive lines. That’s crazy to think about for a program like the Longhorns. Tom Herman does have talent coming in at the position in the 2018 class, but that won’t help Watson, who has one year of eligibility left.

Meantime at Texas Tech, Watson walks into a situation where Justin Stockton is gone, and he’s likely to play alongside Tre King. Stockton was the team’s leading rusher last season with 694 yards. Desmond Nisby and Demarcus Felton will be seniors, but have been proven to be more of role players. A wildcard here is Da’Leon Ward, who led the team in rushing as a freshman in 2016, but was not with the team last season. He looks to be back, but I assume Kliff Kingsbury will have Ward on a tight leash.

As for Texas Tech’s offensive line, it’s not lights out, but it’s sold. The line is anchored by Jack Anderson, who was one of the best freshman in the entire Big 12 last season, he just got overlooked due to the position he plays. The Red Raiders return most of their contributors from last season, which did admittedly struggle at times, allowing Nic Shimonek to be sacked 27 times.

As for play calling, Kliff Kingsbury is clearly making more of an effort to run the ball than he had in previous seasons. Last year, Tech rushed the ball 424 times for 1,699 yards. That’s an increase from 2016 when the running backs had 389 rushes for 1,243 yards.

The Longhorns ran the ball 465 times last season, but 103 came from quarterback Sam Ehlinger. That leads to the next point that Texas uses its QB, especially if it’s Ehlinger, to run the ball a lot. Texas Tech has not traditionally done that. And with an open quarterback competition in Lubbock, Kingsbury may be looking to run the ball more than ever.

It’ll be great to see Tre Watson in the Big 12 this fall, but for my money, he’s more likely to see big production numbers this fall in West Texas, which will help him if he wants to play at the next level.