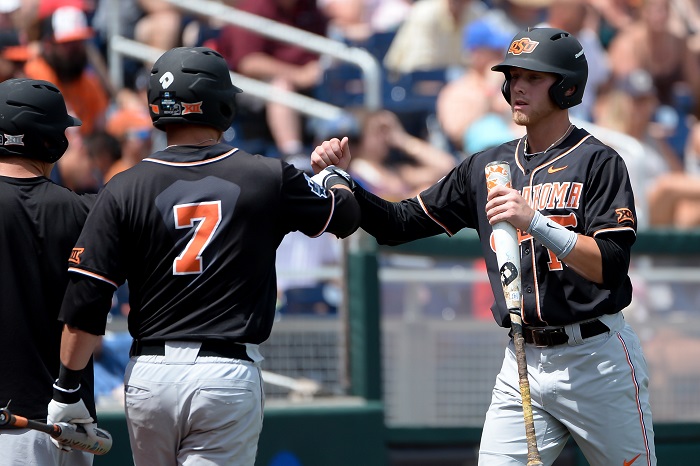 We are in the midst of finals.

There are a lot of final things taking place right now. It’s the final week for Kansas State in conference play. It is also likely the final season for their head coach. We’ll have details on that in their paragraph. We’re wondering if it will be the final week that we change No.1 teams again. No one has held onto it yet. Oklahoma State is in the top spot this week. They’re certainly No.1 in Big 12 Conference play with an .833 winning percentage. However, they’re definitely not the No.1 team who can make it to Omaha. We’re thinking two games before the Cowboys get ousted from the NCAA Regionals. Want to take offense to that, Cowboys fans? Prove to me that this team can win outside of conference play. They have a losing record against teams outside the Big 12 Conference.

The Big 12 may get two regional hosting bids. Texas Tech will be one. Texas and Oklahoma are fighting for the second bid. Baylor, TCU, and West Virginia are all fighting for at-large spots. In fact, West Virginia goes to TCU this week. It looks very much like the loser will have its bubble burst.

It’s May! The Madness is on! Ladies and gentlemen, we are coming down the stretch faster than Justify at the Kentucky Derby. Okay, maybe not that fast. The race is on though. We are on the Road to Omaha. It’s time to start checking those RPI rankings and regional projections daily. It is the final stretch.

Congratulations, Cowboys fans! For the first time ever, this historic program has notched the top spot in the Heartland College Sports Power Rankings.

The Texas Longhorns might just get to Omaha this season. As the season continues they become better and better. Their one weakness: they play down to their competition. Texas could very well host, but this is the type of team that drops game one to a four-seed only to come back and win the regional. David Pierce has to find a better way to motivate his team against the New Orleans’ and Kansas State’s of the world. Nolan Kingham had his best outing since March against Texas Tech. The Longhorns took two out of three in Lubbock which is one of the most impressive team outings in the nation this season. In fact, that is so impressive, Texas doubled the amount of home losses Tech had prior to the weekend. West Virginia and Oklahoma each took one game from the Red Raiders. Texas pushed that number from two to four. By the way, Zach Zubia earned his third Newcome of the Week award.

It is virtually impossible for Texas Tech to achieve the three-peat now. Oklahoma State would have to lose out. Tech fans shouldn’t be too sad about this news though. Oklahoma State has no shot of going to Omaha. Remember, they can’t win outside the Big 12. Tech, meanwhile, should go to Omaha. This is despite the loss of Steven Gingery. No, I don’t see Tech winning the national championship. However, that should be the prize they set their eyes on. There are two areas where they are weak in right now. After playing 21 conference games, Tech has committed 25 errors already. That’s awful baseball. For a team that has consistently been in the top five in most polls all season long, that’s a head scratcher. Also, their ERA during league play is 5.31. They are sixth in league play. The offense is explosive, but defense wins championships.

Yogi might steal someone’s pic-a-nic basket and sneak into the NCAA Regionals. Baylor entered finals week hot. They are currently on a 10-game win streak, and are almost guaranteed to make it 12 straight with two midweek games against Prairie View A&M. The Bears were off last week, but they didn’t stop playing baseball. Head coach Steve Rodriguez has made it a tradition to have his team give back to the community during Baylor University’s finals week. This week, they hosted hundreds of Challenger Little League players during a Shriners Hospitals for Children event. Rodriguez is constantly trying to put community service at the forefront of his program’s values. If you get a chance, go visit Baylor Baseball’s Twitter page to get a glimpse of their impact. This is, by far, one of the classiest collegiate sports programs in the nation. Kudos to you, Baylor!

Oklahoma may have finally ended their cold streak. Currently, they’re closer to the No.6 spot than they are to the No.4 spot. I like to reward sweeps, but I’m not giving the Sooners the No.5 spot for their sweep of Kansas State. Brad Hill is basically a lame duck at this point (more on this below), and Kansas State is being slaughtered by just about every Big 12 team they face. Even less credit goes to the Sooners for the sweep coming at home.

I do, however, give them the No.5 seed and praise them for doing something Texas and Texas Tech have failed to do: beat the teams you are supposed to beat. Two of Kansas State’s three conference victories this season have come against the Longhorns. Tech has pretty much lost the Big 12 title for a lack of sweeps. Tech dropped games to Kansas and West Virginia. The Red Raiders also dropped a series to Baylor when the Bears weren’t playing all that great. Oklahoma started conference play 8-0. They’ve come up short against the top third of the conference, but credit them for winning when they are supposed to. It may even garner them a hosting bid. Don’t get your hopes up, but the Sooners have a chance.

In our last rankings, we declared TCU’s season over with. The Horned Frogs are trying to prove me wrong, and are climbing up the RPI rankings. As of Monday, they are No.66. Jim Schlossnagle’s ball club had an impressive series victory against Texas Tech. TCU has also won eight of their last nine. They will need to score a series victory in each of their final two weekends. This week, TCU hosts West Virginia. In the final week, they travel to Texas. I stand by my decision to kill TCU’s season. But remember, when the Houston Chronicle laid down the tombstone for the 2005 Houston Astros in June, those same Astros advanced to their first ever World Series.

Jim Schlossnagle still believes his team can do it, and that is the kind of crazy ideology that just might push them there.

By the way, we do want to mention that Haylen Green took a no-hitter into the ninth inning against Lamar this weekend. He struck out 11 in the Sunday outing while surrendering just one walk. Ultimately, the hit that broke it up ended up being the only hit Green allowed.

It may be a play-in series for an at-large bid when West Virginia travels to Fort Worth this weekend. TCU and West Virginia have both had subpar seasons, but recent runs have provided them with faith they can get back to the regionals without a conference tournament title. For West Virginia, it would benefit their road record and strength of schedule to take two of three at TCU. They’ve been one of the ugliest teams this year, ranking sixth at best in the three main categories (Batting, Pitching, Fielding). It’s a team that never seems to give up though. If you were to look at this team, you’d act as a fan of the Cleveland Indians at the beginning of Major League. They lack a starting rotation. Their bullpen is a essentially anyone Mazey feels will get the job done. Essentially, this is a little league team. “Hey, who wants to pitch today?”. It’s worked though. If West Virginia sneaks its way into a regional, Randy Mazey should be inducted into the College Baseball Hall of Fame next year. Before Mazey, the thought of back-to-back regional appearances for West Virginia wasn’t even dreamed about.

Just because Kansas won a home series against West Virginia doesn’t mean they are a better team. This team was swept at Cincinnati. It’s currently three games under .500. The end of the Ritch Price era may be coming. I don’t advise that. Again, this team is young. Bringing in a new coach, might set the program back further than what it already has. If Price does stick around for next season though, the Jayhawks better be competing for a Big 12 Championship. This team lost 11 consecutive games. They may be back on track now, but they are done for an at-large berth. Luckily for this Jayhawks team, they’re pretty much playing a Kansas State team with a lame-duck coach this week.

This team has now lost 15 of its last 16 conference games. Brad Hill needed to show something this year. Instead, the fat lady is now singing. Kansas State doesn’t have to just sweep Kansas this weekend. The Jayhawks have to lose out for the Wildcats to sneak into the Big 12 Conference Championship. Sure, Oklahoma probably will sweep Kansas in Norman. However, the way this Kansas State team has looked, there is no way they sweep Kansas. If they do advance to the Big 12 Championship, they’re going to have to win it to save Brad Hill’s job. That may not even be enough. Hill signed a five-year contract with the Wildcats in 2013 after he took the program to their only Super Regional appearance. They also won the Big 12 Conference in 2013. There is no doubt Brad Hill is the greatest coach in program history at Kansas State. Like Wayne Graham at Rice though, his time has come. One loss against Kansas will officially eliminate the Wildcats from postseason play. If that happens, it would be the third time since that magical 2013 season that Kansas State was the lone team left in the dust. As if that truth doesn’t hurt enough, one of the two seasons Kansas State did advance, they were the final team in. It’s time for Kansas State to move on. Maybe, just maybe, the Wildcats can send him off with a series victory against the team’s in-state rival.

Rob Glass is entering his 18th year of his second stint with the Cowboys, 28th year overall, and is signing a five-year...

The Big 12 is meeting on Tuesday about adding four new members from the Pac-12, according to a report from Wildcat Authority,...

Sydir Mitchell, a defensive lineman from New Jersey, became the latest player to give the Texas Longhorns a commitment for their 2023...

Lincoln Riley: ‘USC Football is Excited to Compete in the Big Ten’

Lincoln Riley, the head coach at USC, sounds excited about the Trojans’ move to the Big Ten in 2024, according to a...

The Big 12’s hiring of Brett Yormark has had some questioning the move, but with the changing of the landscape of college...