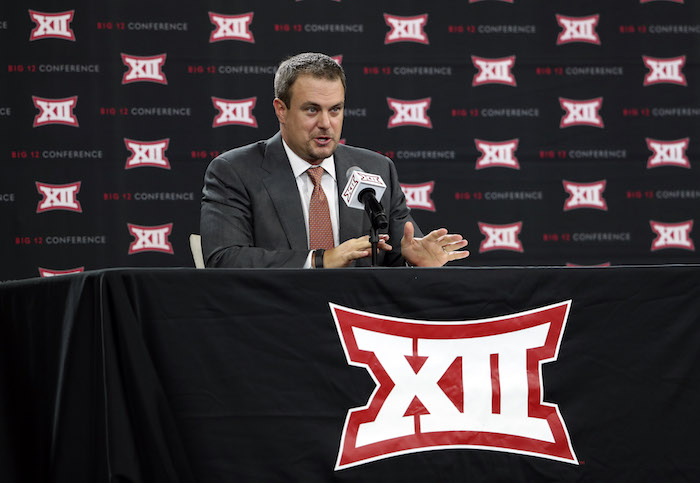 Tom Herman has an interesting ability to be able to toe the company line when necessary, but also give you an off-the-cuff answer to a question. He did just that at the Touchdown Club of Houston event on Thursday when he was asked by a Texas fan about the arrogance of Texas A&M, along with what his thoughts are on when the two schools will again be playing each other.

.@CoachTomHerman at the Touchdown Club of Houston asked by a @TexasFootball fan about Texas A&M seemingly getting more & more arrogant and now they’re going to win the national title: “Bro I got TV cameras on me or I’d tell u really how I thought.” Does hope they will play again. pic.twitter.com/jE5ucjJ9gw

When asked about his honest thoughts on A&M, Herman quipped, “Bro, I got TV cameras on me or I’d tell you really how I thought.”

I’ll give it to Herman, very smooth, quick, funny and honest answer.

Herman than made it clear he is for renewing the rivalry, and pointing out this kind of game happens across the country every season, saying, “I do know this: Interstate rivals that are in different conferences from all over the country find ways to play each other. Clemson and South Carolina play every year. Florida and Florida State play every year. Georgia and Georgia Tech play every year. Even in our own conference, Iowa State and Iowa play every year. The list goes on and on. I do hope at some point we do find a way.”

So Herman clearly wants the rivalry to continue, or so he says. And I believe him.

But CBS Sports writer and radio host Barrett Sallee said this week on his podcast that, “Texas is scared of Texas A&M. I firmly believe that Texas is terrified of what Texas A&M is and what Texas A&M wants to be, otherwise they’d play.”

That’s bogus, and I’m sorry but Sallee is a massive SEC homer.

My two cents: Texas A&M has a superiority complex being in the SEC. They felt like the little brothers in the Big 12, they got to the SEC and think they are “hot stuff” after one great season with Johnny Manziel. But the reality is since then they’ve been a mediocre .500 team just like they were for years in the Big 12. And they can keep waving the “SEC!” pom-poms with the rest of the average SEC teams that end up being Alabama fans come December.