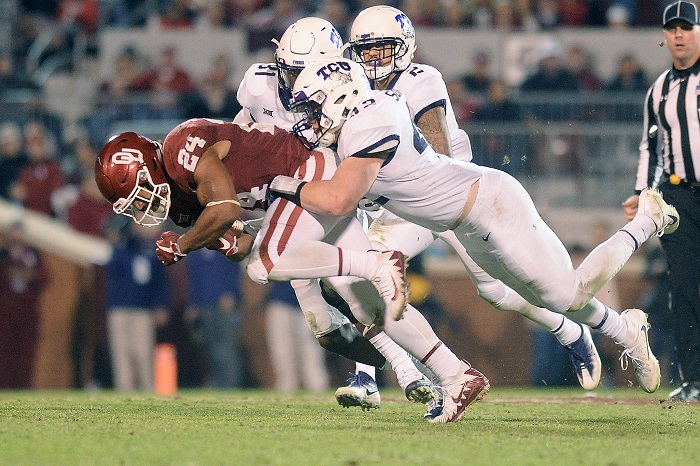 As we continue to yearn for college fooball, now is a good time to have some fun with predictions about which player could turn out to be the key between a successful and an unsuccessful season in the Big 12 Conference. Sure, in just about every case we could say the quarterback, but my goal was to go outside the box and find you either a new face, or an unsuspecting name, who could prove to be pivotal in a team’s ability to reach the fan base’s expectations come the 2018 season. So here we go!

Hurd transferred from Tennessee, where he was one of the most productive running backs in the SEC. But now, he’s ready for a new challenge at wide receiver. And at 6’4”, 225, why not? He can be the do-it-all threat for Charlie Brewer this fall, and will take a lot of the pressure off of the rest of the offensive weapons. So whether it’s his fellow wide receivers like Denzel Mims and Chris Platt, or running backs such as JaMycal Hasty and John Lovett, everyone will benefit from Hurd’s presence in the offense.

Joel Lanning’s stunning story from quarteback to incredibly productive linebacker is now a distant memory as he looks to make a mark in the NFL. His production, leadership and heart will be tough to replace, but Willie Harvey has been a multi-year starter for the Cyclones, has been through the ups and downs, and is going to have to help fill that void left by Lanning. If he stays away from theories such as the world being flat, he will be just fine.

Wise is a very good player, but now he’s the focus of the defensive line after Dorance Armstrong left early for the NFL. If Wise can handle the spotlight of the defensive line and draw double teams, which opens up opportunities for defensive ends Josh Ehambe and Isaiah Bean, then KU’s defense can hold its own enough to give this offense a chance to score some points and keep up with their opponents. The KU secondary is a work in progress, so if the defensive line can get itself figured out, then there’s potential for a Big 12 win (or dare I say two) in this program’s future.

This unit has to get its act together after having the worst pass defense in the Big 12 last season. The offensive pieces are there for K-State to have one of its typical Bill Snyder-esque surprising seasons. But if the secondary can’t hold its own, it won’t much matter. Shelley is a returning starter and is expected to be a leader of this group. He was the first defensive player to address the media after the spring game, so it’s clear that this is who Snyder is putting the pressure on to try and get the unit turned around.

Baker Mayfield is gone. Kyler Murray is expected to step in, but what if he bolts for the MLB Draft? Regardless, Murray is not a known commodity at the position. It’ll be important for the running game to take on more of the burden this season and that all starts with Anderson. After dealing with injuries throughout his early career, Anderson burst onto the scene last season, and he needs to continue to lead the running game ahead of Trey Sermon and others for OU to once again become Big 12 Champions in 2018.

So the Cowboys are replacing an incredibly productive duo in Mason Rudolph and James Washington, who are both off to the Pittsburgh Steelers. The QB race is likely to come down to Hawaii transfer Dru Brown and true freshman Spencer Sanders. But whoever wins that competition is going to need all the help he can get. Enter: Tyron Johnson. The LSU transfer did not exactly light the Big 12 on fire last season (16 catches, 268 yards), but he was dealing with a crowded wide receivers unit. If Johnson can become a top target, along with Jalen McClesky and Dillon Stoner, it will be a huge help for this offense to maintain its productiveness from recent seasons.

Watson just joined the Longhorns, picking them over Texas Tech. The Cal grad transfer can also catch the ball out of the backfield and can step in immediately and help Texas on the offensive side. Ideally, the Longhorns won’t need to run Sam Ehlinger over 100 times this season and keep him, or Shane Buechele, healthier this season. In his most productive season at Cal, in 2016, he had over 140 carries and more than 20 catches. That production, and ideally more, will make a world of difference for the Texas offense this fall.

As a junior, Summers had 64 tackles and four sacks last season, but heading into his senior season, more should be expected of Summers, as TCU has to replace a lot of senior production and leadership on defense. Mat Boesen is gone, along with Travin Howard, whose 9.0 tackles per game ranked third in the Big 12 last season. If Summers can help fill the production void and leadership void for Gary Patterson’s defense, then this side of the ball will be in solid shape to try and replicate last season’s best defense in the Big 12 (total yards per game).

After a standout freshman season in 2016 where he led the team in rushing, Ward was not part of the program in 2017. Now, he’s back, and after Tech missed out on Tre Watson and then lost two running backs in Desmond Nisby and Demarcus Felton to transfer, while having to also replace a starting quarterback, it’s on the running game to help put points on the board. That leaves Tre King, but also Ward. King can’t do it alone, so Ward is going to have to find that 2016 form that put him on the map. Without that, the offense might ironically enough be the downfall for Kliff Kingsbury in a must-win season.

The Mountaineers were desperate at this position, and Robinson’s addition via the grad transfer route from Clemson certainly helps sure up the defensive line. West Virginia needs to stop the running game this fall after finishing last in the Big 12 in rushing yards allowed per game in 2017. Robinson was stuck behind some of the best defensive linemen in the country at Clemson, but in Morgantown, he is likely to be paired with Kenny Bigelow, a USC transfer, to try and bulk up a unit that was swiss cheese at times last season. At 6’4”, 270, Robinson certainly has the size to fill the void that’s been missing.