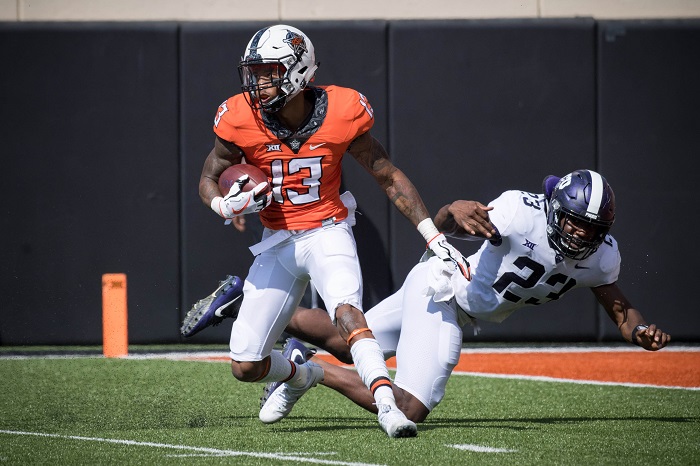 I will pick the best question for each mailbag and label it as my question of the week. The winner gets a free HCS Koozie to keep your beer cold (Unless you like it warm, but that’s just plain wrong). It was busy question day which tells me that this mailbag is working harder than me at my day job. Unlike the “Big 12 blog” over at ESPN (I say that loosely because one story a week is a tragedy), we here at HCS are determined to give you the best Big 12 coverage on the planet. I want to thank each one of you who submitted a question this week and for those reading, I am glad you could join me. Let’s get this party started!

There are probably some that don’t give a rats you know what about how my weekend was. If you do care or even if you don’t, I am going to tell you anyways. It all started Friday with a trip to the movies and saw the movie “Upgrade”. I’d give it a 5 out of 10. Saturday was the highlight of the weekend as I found myself in San Marcos, Tx having a few drinks with friends. I wrapped the weekend up going back to my hometown to see my family and had some solid fried chicken. Although the chicken was great, the two-hour drive back home wasn’t.

@jonkev50 asks: Who is a potential breakout player in the Big 12 that no one is talking about now for the upcoming season?

Duke: Back in 2016, I wrote an article about former K-State WR Byron Pringle becoming a star in the Big 12. As it turned out, I was a year too early because last year was his breakout year. Back track a year ago around this time, I went on a radio station and praised Oklahoma State WR Tyron Johnson heading into the 2017 season. Do you see where I am going with this?

Looking back at his stats last season (18 Rec, 293 yds & 3 TDs), you wouldn’t expect much but let me tell you something, this guy is a freak athlete and I wouldn’t be surprised to see him as the number one WR in Stillwater. Talk to NFL scouts or analyst and they will certainly tell you that there are plenty of eyeballs on him because the talent is there. I saw plenty of list of top WRs in the Big 12 and hardly anyone had him in their top 10 which is silly because he may be the first Big 12 WR off the board in the 2019 NFL Draft. Those around the OSU program know but now so do you. No to mention, with James Washington and Marcell Ateman gone to the NFL, there are more targets to go around.

@Shroudllama asks: Why do you hate my favorite school?

Duke: Well, hello there Dave. Always good to hear from you. I assume you are talking about Oklahoma State? I have them finishing at 6 or 7 in the Big 12 this season. Offensively, you know how much they must replace from Mason Rudolph, James Washington, Marcell Ateman and 2 key offensive lineman from last season. Starting with quarterback, is it Hawaii grad transfer Dru Brown or freshman Spencer Sanders? I’d have hard time seeing a freshman win 8 or 9 games with this schedule. Also, how good is Dru Brown? The WRs will be fine but the offensive line has both tackle spots up for grabs which scares me a bit in this offense. However, RB Justice Hill is one of the best backs in the country. This offense will rely a lot on the running game this year, but the quarterback spot just has too many question marks now.

Defensively, I like the defensive line and LB Calvin Bundage. That secondary was brutal last season and with some new faces there, I have some concerns in the back end of that defense. I don’t think it’s just an overnight fix with new DC Jim Knowles. Looking at the schedule, I think OSU could start 4-1 but those last 7 games will be brutal. I think an 8-win season would be a big success for OSU. This program can’t just reload like an Alabama after losing that much.

Duke: I think you just answered your own question there because I would say OU WR Marquise “Hollywood” Brown is probably the best playmaker or the guy that should scare defenses to death. He had over 1,000 yards receiving last season and will likely do the same once again this season. He is just so damn fast it’s unbelievable how fast he is out there. I mean it looks like he is an Olympic sprinter at times and he runs so smooth. Anytime that guy touches the ball, he is a threat to score. I am sure many defensive coordinators lose some sleep the night before trying to defend him. I would mention some other names, but I like the idea of making a top 10 list, so I’ll save that one in my back packet to write something up soon about that.

@KBehr68 asks: Now that Kamilo Tongamoa is trimmed down and in shape, where do you rank the Iowa State front of Kamilo, Lima, Bailey and Uwazurike in the Big 12?

Duke: I will explain myself here in a bit, but I would put that defensive front at number 4 in the Big 12. The 3 teams I would put ahead of them are Texas, TCU and Oklahoma State. All 3 of these schools have proven guys up front who return, and I think there are 2 other teams to consider at 4 but I will put the Cyclones there. Bailey finished 5th in the Big 12 in sacks last season for those who don’t know and Ray Lima is a man amongst boys in the middle of the DL. Depending on Kamilo Tongamoa, he could take this group onto a different level.

@Mission CFB asks: What game has the potential to be this year’s version of Iowa State knocking off Oklahoma on the road?

Duke: This is a great and a very tough question. So, for that to happen, the team must be a decent underdog in the game. I am going to make a little list here of potential upsets for the year that could be HUGE.

If I had to pick one most likely to happen it would be Iowa State beating West Virginia at home but all 4 of these games have upset alert on them. I may be forgetting some, but these stick out to me. Hope this helps your travel schedule!

Duke: If I had any answer besides Oklahoma or Texas it would be silly considering the level both programs are recruiting at right now. In the 2018 cycle, Texas ended up with the 3rd best class in the country. Texas hasn’t recruited that highly in the last five years. Don’t forget about Oklahoma who is recruiting at an all time high in the last decade. They finished with the 9th ranked class for the 2018 class and currently sit at #3 for the 2019 class. There is no doubt that Lincoln Riley and Tom Herman have been making their presence felt on the recruiting trail. I mean TCU is starting to pull top 25 classes but when you have two programs who are likely going to end up in the top 10 for the second straight year, that’s hard to ignore.

As far as individuals go there are a few guys who come to mind. Here is a little list of some of the best in the Big 12.