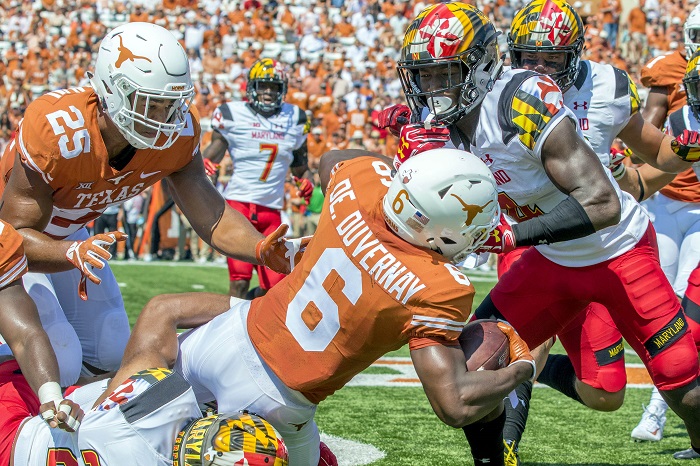 We are within 100 days until we kick off the 2018 college football season. Well, it’s 84 to be exact, but who’s counting? The Big 12 Conference has a slew of great non-conference games that will get fans juiced up for the conference schedule, which begins as early as mid-September for some teams. Heartland College Sports’ Pete Mundo and Derek Duke will be taking you through the top 10 non-conference games on the Big 12 football schedule, ranking from No. 10 down to No. 1. Let’s get to it!

The match up itself brings chills to Texas fans, who sat through a sweltering Saturday to watch Texas lose Tom Herman’s inaugural game 51-41 last season. Holton Hill started the game off with a Pick Six on the third play of the game, which energized the UT fan base and the sideline, but that would be the end of Texas’ lead. Texas gave up over 250 rushing yards and found itself down 30-14. A third-quarter surge pulled the Longhorns to within 30-27, but Maryland, who had to turn to its back up quarterback, still held on for a win.

Texas is getting lots of hype heading into the 2018 season, and if they want to be taken seriously early in the season, starting off 1-0 against the Terrapins is a must. The Longhorns non-conference schedule starts at Maryland, followed by Tulsa and USC at home. A 3-0 start is ideal, but anything short of 2-1, with a very close loss to USC, will be viewed as a disappointment.

It’s also important for the Big 12 Conference to pick up this win against a Maryland team that is improving under third-year head coach D.J. Durkin, but still is far from a Big Ten powerhouse. Also, Durkin hired Matt Canada as his offensive coordinator this offseason. Canada was once one of the hottest assistants on the market, joined LSU, but was fired after the 2017 campaign. Canada’s track record at Northern Illinois, Wisconsin and Pittsburgh is impressive, including being named a finalist for the Broyles Award in 2016 at Pitt, where the Panthers averaged 42 points per game, ranking 10th in the country.

With the expectations rising rapidly for the Longhorns, combined with Maryland having a couple of solid recruiting classes in a row, it’s a game that both teams will use as an early-season barometer as to whether or not Maryland is ready to be bowl eligible and dig out of the Big Ten east basement, and for Texas to see if this is the season it gets back into contention for a Big 12 Championship.