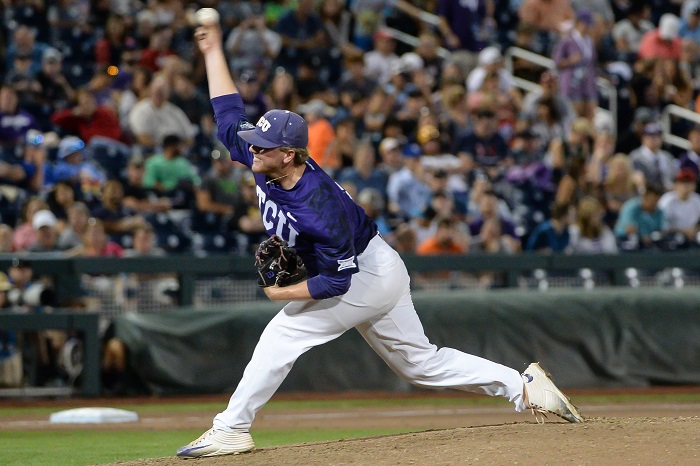 If you don’t know the name Durbin Feltman right now, you might know it come October.

The TCU right-hander is arguably the best closer in college baseball. He decided to forego his senior season and sign with the Boston Red Sox Wednesday. Many experts are saying he will make the rapid jump to the majors this fall, just before the postseason.

Red Sox scout Brandon Agamennone told The Boston Globe a match-up between Feltman and teammate slugger Luken Baker was “unfair” when he watched the two square off this spring. Feltman and Baker were also high school teammates at Oak Ridge High School in Conroe, Texas.

The 6-foot, 190-pounder racked up 32 saves during his three years at TCU. The number is only that low because he wasn’t provided many save opportunities on an injury plagued TCU squad in 2018. In 18 appearances this season, he allowed two earned runs on six walks and 12 hits. He struck out 43 hitters. Look at those stats again. Batters struck out more than two times the amount of times they reached base against Feltman. His ERA on the season was 0.74. Over his career, he struck out 129 batters while allowing just 50 hits and 32 free passes.

The fact Feltman stayed on the board for 100 picks shows you the lack of emphasis MLB teams are putting on the bullpen. Some teams, who could’ve used that help this postseason, will likely regret not taking him on day one.

MassLive.com’s Chris Cotillo reported that Feltman signed for $559,000 and start with their Short Season-A affiliate Lowell Spinners of the New York-Penn League.