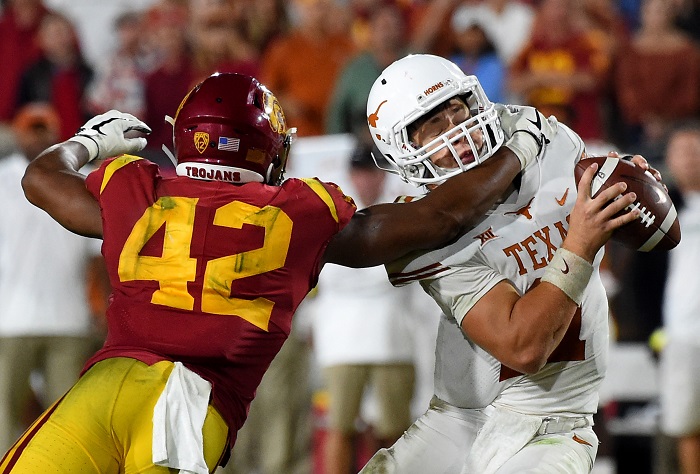 We are within 100 days until we kick off the 2018 college football season. Well, it’s 76 to be exact, but who’s counting? The Big 12 Conference has a slew of great non-conference games that will get fans juiced up for the conference schedule, which begins as early as mid-September for some teams. Heartland College Sports’ Pete Mundo and Derek Duke will be taking you through the top 10 non-conference games on the Big 12 football schedule, ranking from No. 10 down to No. 1. Let’s get to it!

First off, some of you will insist we have Texas bias on giving this the top spot. Here’s why I believe it edged out TCU-Ohio State: it’s on campus. That’s it. TCU vs. Ohio State may certainly end up being a better game between teams who could very possibly be teams who compete for a conference championship, but it’s at AT&T Stadium. The sterile atmosphere of a neutral site does not have the same juice as a match up on campus between two of the historic programs in the sport.

Sure, the National Championship over 10 years ago was a big deal, but last year’s game was a pretty darn good early-season match up as well. USC won 27-24 in double overtime in Southern California, but now the game heads to Austin, and Sam Darnold is no longer around to bail out the Trojans. So it’ll be Matt Fink, Jack Sears or J.T. Daniels under center for USC, but the unknown of the position gives UT the edge from the get go.

The in-game storylines of Clay Helton’s offense against Todd Orlando’s defense, along with how the Texas QB (either Sam Elinger or Shane Buechele) handle an explosive and athletic USC defense should create plenty of storylines ahead of this one.

For the Longhorns, it’s Year 2 under Tom Herman. Year 1 consisted of plenty of close losses, including this USC game. If UT is going to make that jump into Big 12 contenders, then a 3-0 non-conference start capped off by this game against the Trojans would be ideal. Plus, USC may have lost some key players, but they are still the favorites to win the Pac-12 South and have the second-best odds to win the Pac-12. So it’d be a big win for not just the Longhorns, but the Big 12 Conference.