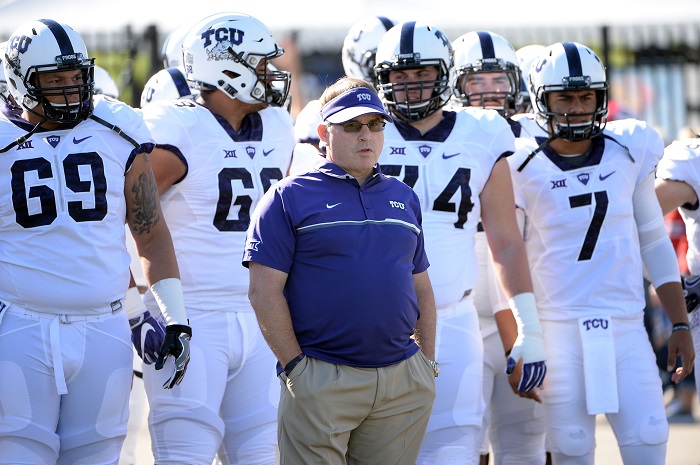 We are within 100 days until we kick off the 2018 college football season. Well, it’s 76 to be exact, but who’s counting? The Big 12 Conference has a slew of great non-conference games that will get fans juiced up for the conference schedule, which begins as early as mid-September for some teams. Heartland College Sports’ Pete Mundo and Derek Duke will be taking you through the top 10 non-conference games on the Big 12 football schedule, ranking from No. 10 down to No. 1. Let’s get to it!

Ohio State? TCU? Yes please! It’s not hard to see why this game is so high on this list. Ohio State is a blueblood program that has been a traditional power not only on the field but on the recruiting trail as well. They have been a yearly favorite to win the Big Ten every year and the expectations are national championship or bust. As for TCU, Gary Patterson has this program in great shape becoming one of the most consistent teams in the Big 12 year in and year out. While the TCU defense should be in great shape, there are plenty of question marks offensively. How will new quarterback Shawn Robinson look? Will true freshman quarterback Justin Rogers be healthy? Also, how will the offensive line shape out after losing some key pieces from last season?

The Ohio State offense doesn’t have many question marks, but the one big question is how will quarterback Dwayne Haskins look in his first season as a starter? Luckily, he has a stout running back in J.K. Dobbins who rushed for over 1,400 yards as a true freshman last season along with an experienced wide receiver group. Defensively the Buckeyes have always been top notch which will likely be true once again this season. However, the linebacker group appears to be the weak link in this defense.

Why is this game important? Like I mentioned earlier, it’s playoffs or bust for Ohio State and this game will be a key factor on possibly getting in the final four if they take care of business in the Big Ten. For TCU, not only will this be big for their program, it will be key for the Big 12. If the Horned Frogs can pull off the upset, the Big 12 will get some serious national respect just like last season when the Sooners knocked off the Buckeyes in Columbus.