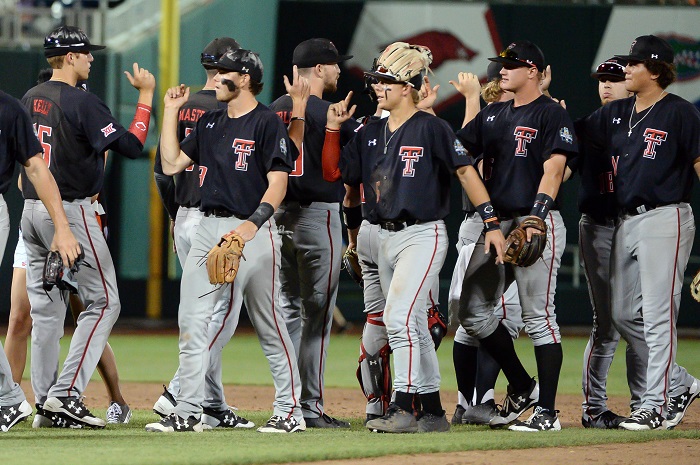 The road has ended and eight teams have made it to Omaha without crashing and burning. Texas and Texas Tech will represent the Big 12 Conference at TD Ameritrade Park at the College World Series. They are in the same bracket, which has a Southwest Conference flavor. Arkansas has taken one of the smoother paths on the rocky, winding highway to the College World Series.

For those who are not familiar with college baseball, eight teams are in the field. Two brackets have divided the field into four team, double elimination battlegrounds. Whoever survives the bracket will play in the National Championship, a best of three game series. Only one team will take home the trophy and fly the pennant. Will it be a Big 12 team? Stay tuned as we preview each game featuring a Big 12 Conference team.

This game is for the driver’s seat. Whoever wins is one victory from a best-of-three game series for the National Championship. Neither of these teams have held up the trophy. The loser will have to win three straight games, including two against tonight’s victor. Texas Tech leads Arkansas in every offensive category except home runs. Arkansas leads Texas Tech in every defensive category except fielding percentage, and the two teams are tied in that category at .972.

Neither of these pitchers lasted long in their Super Regionals starts. Kacey Murphy lasted just 4.1 innings during an 8-5 loss against South Carolina in the Super Regionals. Already trailing 2-1, he allowed the start of a big five-run inning that pushed the Gamecocks lead up to 7-1.

Davis Martin was pulled in the fourth inning after allowing a leadoff double. That double turned into his only earned run. This came one day after Duke put up a four-spot in the fourth inning and followed up with six runs in the fifth inning. All hands were on deck in that decisive game three, so the leash was short.

If these two can’t place those starts behind them, it’s going to be an offensive display. Both teams average more than one home run per game. Arkansas has blasted 95 home runs. While Tech has hit 82 homers, they’ve also compiled 25 triples and are second in the nation in on-base percentage.

Both teams could desperately use this victory as pitching depth could start becoming an issue. Tech has Caleb Killian, who allowed six earned runs to Duke during an 11-2 loss. The pitcher with the most starts remaining on the Razorbacks is Isaiah Campbell, who is 4-6 with a 4.19 ERA.

College World Series: Texas vs. Florida Preview
Matt Campbell Has $7 Million Buyout If He Leaves After 2018 Season
To Top