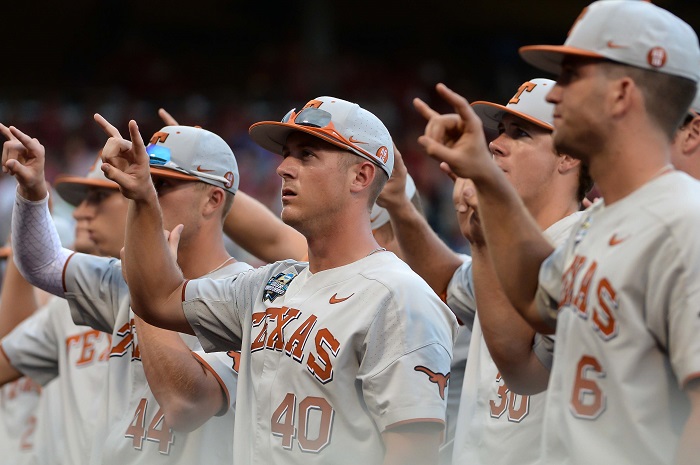 The road has ended and eight teams have made it to Omaha without crashing and burning. Texas and Texas Tech will represent the Big 12 Conference at TD Ameritrade Park at the College World Series. They are in the same bracket, which has a Southwest Conference flavor. Arkansas has taken one of the smoother paths on the rocky, winding highway to the College World Series.

For those who are not familiar with college baseball, eight teams are in the field. Two brackets have divided the field into four team, double elimination battlegrounds. Whoever survives the bracket will play in the National Championship, a best of three game series. Only one team will take home the trophy and fly the pennant. Will it be a Big 12 team? Stay tuned as we preview each game featuring a Big 12 Conference team.

Game time: 50 minutes after the conclusion of North Carolina vs. Mississippi State

The Longhorns were rocked for a big inning against Arkansas after a lengthy weather delay. Manager David Pierce decided to use two starters and his main closer in their first matchup, a game in which they trailed 11-2 at one point. The good news for Texas is that they gained momentum late in the game, so they could possibly take that momentum into this game. The theme of the post-game press conference was Texas had lost game one to Tennessee Tech in game one of the Super Regionals. Game one starter Nolan Kingham was quick to point out the comeback and extinguish any panic from those who follow Texas baseball.

Meanwhile, Florida has struggled defensively. They gave Tech multiple runs due to defensive miscues. One run was aided by a balk. Another couple of runs came off errors. This has been Florida’s kryptonite as of late. If Florida continues to make defensive mistakes, there will be a new champion crowned this season. Not only that, but Texas will live to fight another day. If Florida’s defense minimizes the errors, it is likely Texas will be the team packing their bags. Florida has  Florida starter Jackson Kowar was drafted 33rd overall by the Kansas City Royals in the MLB First-Year Player Draft. If his fielders field, it will likely be a long day for the Texas offense. Although with the team honoring Augie Garrido, this Texas team has been known to bounce back easily from losses. Never count out the Longhorns during this tournament.