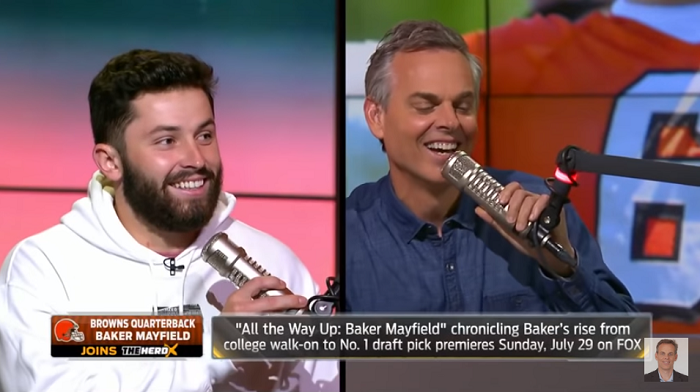 Former Oklahoma Sooners quarterback Baker Mayfield sat down for an excellent 20-minute conversation with Colin Cowherd. The Fox Sports 1 host has been very critical of Mayfield throughout the 2017 season and leading up to the NFL Draft, when he insisted Mayfield did not have the make up to be a franchise quarterback.

I was fascinated by the conversation because it was the first time we’ve seen Mayfield in a true, no-strings-attached, long-form interview setting.

And guess what? Baker Mayfield killed it.

He was conversational, confident, had just enough swag, but not too much, and also was incredibly well spoken, intellectual and thought-provoking.

My expectations were far exceeded.

Right off the bat, Cowherd came out swinging and Mayfield said, “You don’t actually know me … There’s no actual research to it [the negative perception of him].” But it was the way Mayfield delivered that line that was even more impressive than the cajones to say it right to Cowherd’s face. The quarterback wasn’t angry or nasty. He was calm and composed as he delivered the defense of himself, as if to say, “this guy really isn’t even worth my time.”

As the conversation progressed, Mayfield defended his intensity on the field, saying, “Football is a violent competitive game. It was meant to be played with an edge.” That is one of the most misunderstood things by today’s media folks and Mayfield went on to point out that half the things that are said on the field in the NFL, the court in the NBA, and on the field in MLB, are things that would offend a lot of people who don’t understand what happens when you put the most athletic and competitive testosterone-fueled men in the world in a small space at the same time.

Mayfield showed his knowledge of realizing this is a business and that teams are investing millions of dollars into 21-year-old men. He was open about the fact that every team asked him the same questions about his personality and character, but defended his confidence as he begins his pro career. He was also honest in saying he believes the Browns have more faith in veteran QB Tyrod Taylor at this point in time, but that will in no way hamper his competitiveness.

When it came to his size, at 6’1”, the quarterback pointed out that today’s game is different from the days of the ideal quarterback being 6’4”. He pointed out the additions of RPO’s, screen plays, and game management that have changed over the past 10-15 years. Cowherd was, once again, stumped.

The highlight was Cowherd showing Mayfield celebrating a touchdown away from his teammates in last season’s win over Ohio State in Columbus, and Mayfield responded, saying, “Our band is over there, our student section is right there… did you watch the rest of the game? So did you see me celebrate with my teammates like three touchdowns before that? You pulled the one clip of me running right there to our fans and to people who traveled to that game first of all, and you didn’t show the rest of the clip of me going to our sideline?”

Once again, Mayfield delivered the line that reads harsher on paper than it was in person. He was strong in his rebuke of Cowherd, but did not take it personally.

Cowherd showed the video of Mayfield being arrested, to which the QB admitted he was embarrassed, learned a lot of lessons and now is ready to improve who he is as a person because of it. Even Cowherd had to give him props, saying, “That’s the best answer you’ve given in ten minutes, by far… that’s what grown ups say.”

The conversation wrapped up on a lighter note where Cowherd did give Mayfield some more credit, saying he loves his accuracy, which he believes will prevent him from being “a bust.” Thanks, Colin. Baker discussed how the accuracy and his brain were the reasons he was able to get as far as he’s gotten in his career, something all OU and Big 12 fans already knew.

By the end of the interview, Colin Cowherd appeared to come away liking and respecting Baker Mayfield more than he probably expected to, even wishing him “Good Luck” in the final seconds.