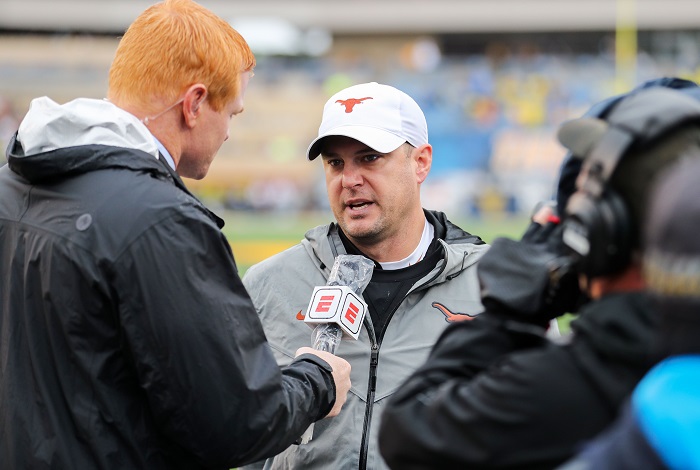 There are probably some that don’t give a rats you know what about how my weekend was. If you do care or even if you don’t, I am going to tell you anyways. Watched some CWS on Friday and had a relaxing evening at home. Then all hell broke loose on Saturday as I went bar hopping with a few friends. Sunday, I slept off my Saturday night as I lounged around for most of the day to wrap up the weekend.

@RPTexan asks: Do you think that the Walt Disney (ABC/ESPN) offer or the Comcast offer would be better for CFB and all college sports? It was reported if Disney buys FOX there is a good chance they unload the RSNs. Then it becomes an open bidding war (Comcast, Amazon, Facebook, CBS, Google, etc.) What does this mean for the Big 12 and conferences to FOX and their RSNs? What does this mean to CFB overall?

Duke: So, this is a very lengthy question, but I have some simple answers here. First off, since its such a long question I am going to start charging money for my answers. Say $7.99 a month? Kidding! Anyways back to the question. THE ONLY THING THAT CFB CARES ABOUT IS MONEY! It’s all about the cheddar. No matter who offers, the highest bidder will get the nod no matter the platform. Trust me, the higher ups in college football want this to turn into an all-out bidding war. I think more money is always a good thing for any conference affiliation networks that televise their games. Luckily the big 12 is kind of in the middle when those contracts are due, so they won’t be the guinea pig so to speak. We will have a better feel for how the future of CFB is televised or streamed. Personally, I don’t care where Big 12 games are being streamed or televised on because I will gladly pay to watch college football on a network or whatever the platform I need to watch it on. By no means am I an expert on this stuff and I am sure Pete Mundo is light years more knowledgeable when it comes to that stuff compared to me. Hope this helps.

@ReedRobertson asks: What are your prognostications for the rising Longhorns?

Duke: Was your pinky up when you said that? Was there an expensive scotch or glass of wine in your hand too? Totally kidding but I am not going to lie to you. I had my pinky up a little holding my drink when I read the question out loud to myself. As for those Longhorns of yours, I am probably going to make a lot of people reading this angry. Long story short, I think this is the year that Texas breaks through. I truly believe they find a way to reach the Big 12 title game in December. Before my mentions completely blow up, let me explain myself a bit. I know what every other fan base is thinking. People say Texas is back every year! That may be true, but I have never said that because I had no reason to because the simple fact was I could not trust any Texas team since 2009. I got burned too many times years ago and I gave up on picking them to win anything really. Can you blame me?

Folks want to talk about how much the Horns lose on defense, but the truth is that Texas may be better defensively across the board this year. Never doubt a Todd Orlando coached defense! The offense is what makes me pause for a moment. The offensive line will be better (Could it get any worse than last year?) and they have some playmakers at WR (Collin Johnson & Lil’ Jordan Humphrey). The biggest question mark is the consistency at QB an and the RB position. Cal transfer Tre Watson should help solve some of the backfield issues, but can Sam Ehlinger make better decisions with the football? The progress of Sam Ehlinger will determine if the Longhorns are a 7 to 8-win team or a possible 10 to 11-win team.

@FitzDaddy85 asks: Will Kansas win a conference game this year?

Duke: First off, it is always nice to meet a Kansas football fan. It seems like we don’t have many, so it is very rare we get Kansas football questions in the mailbag. Also, I can’t wait to check out your blog since there isn’t too many places that cover Kansas football. Now back to the question. I don’t see it happening this season. I like LB Joe Dineen and DT Daniel Wise and they have a few other guys on defense but there are just simply too many question marks everywhere else and don’t get me started about the lack of depth. I believe that this is the last year in the David Beaty era and I am disappointed in the lack of development especially on offense. I haven’t seen the improvement necessary to make me think they will win a Big 12 game this season. If I am a Kansas football fan, alcohol will likely be needed to finish watching a few games.

@StrawnBob asks: Most overrated and under the radar teams going into fall and one reason why for each.

Duke: Always good to hear from you Bob and appreciate the question. So, I am assuming I can only pick one for each category? Alright, let’s start with the under the radar team. It’s that team that is slept on just about every year and a team that you are very familiar with. It’s the Kansas State Wildcats. If I can only say one reason, it’s that offensive line that returns all 5 starters. I love talking about the offensive line because nobody talks about how important they are much these days. The Wildcats may have the best offensive line in the Big 12 along with Oklahoma. Look around, who is predicting for Kansas State do anything this season?

As for the most overrated team heading into the season I would have to say Oklahoma State. I have said a few times in this mailbag that I believe this will be a rebuilding year in Stillwater, but Mike Gundy is more than capable of proving me wrong. My biggest concern is the quarterback position and who is going to be running the show in Stillwater? Grad transfer Dru Brown or true freshman Spencer Sanders? I see a lot of other websites penciling in the Cowboys as the 4th or 5th best team in the Big 12 this year and Vegas has them as having the third best chance to win the Big 12 this season.

@ted_rood asks: Your thoughts on Iowa State’s signings during the early period I am surprised as many recruits are committing like they are.

Duke: Iowa State is on a hot streak right now in the recruiting world. They have had 5 commitments in the month of June and guess what? it’s not even the end of the month yet! I believe in the last 6 or 7 days they have had 4 verbal commitments, so it has been an exciting last week or so for Cyclone fans during such a dull time of the summer news wise. I am not going to dive into the commitments, but Iowa State currently has a top 35 class for the 2019 cycle according to 247. Awhile back I wrote about Matt Campbell’s recruiting formula and why he has been more successful on the recruiting trail than a lot of other coaches who have been there. Things are looking bright in Ames and I think Iowa State fans should be thrilled to have a coach like Matt Campbell running the program.

Duke: Since 2015 Oklahoma State has had a top 25 offense nationally. I know Mason Rudolph was the quarterback during that time but guess who helped Rudolph get to Stillwater? Mike Yurcich! Of course, Gundy plays a huge role in recruiting being the head coach, but the Cowboys offense kept on improving over the last 3 seasons. Has there been a head scratcher or two with the play calling? Sure, but when your offense is ranked in the top 25, you’re doing something right coaching wise along with the talent to execute. I mean former DC Glenn Spencer made more than Yurcich did last season and how did that work out? I am never going to fault a coaching for getting his money, but he will have his work cut out for him this season breaking in a new quarterback. Did he deserve it? Yes the body of work speaks for itself but the great part is that it will all play itself out this season. Thanks Dave!