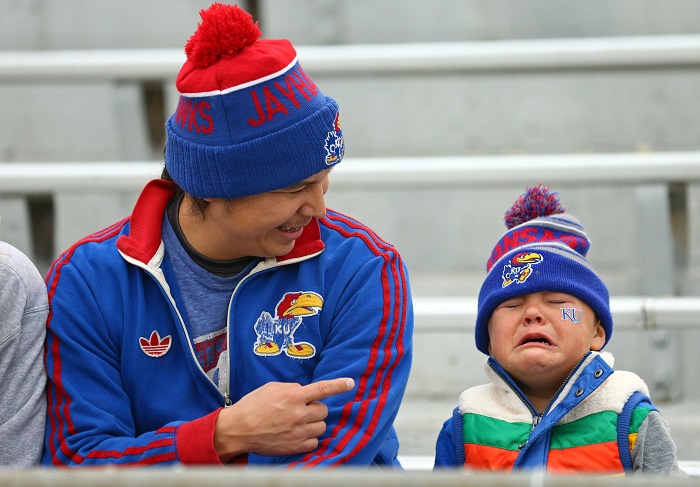 Kansas welcomed in its new athletic director Jeff Long to the program on Wednesday and you have to give him props for his enthusiasm about his new job. Long is clearly in Lawrence to help turn around the football program, as the basketball team is doing just fine under Bill Self.

But for a program that is 3-33 over the past three seasons and has won a total of 20 games in the past nine seasons, Long came out with some bold predictions during his press conference, saying:

“Big picture wise I think for our program our goal is set to reach a bowl game. So we’ll strive to reach a bowl game and once we reach that level we won’t stop there. We’ll move on to more games and ultimately I’m not shy in saying someday down the road we’re going win the Big 12 championship. We’ve done it here at Kansas in the past and it’s something we’re certainly going to work every day and night to do.”

Granted Mark Mangino nearly did just that in 2008 when the Jayhawks went 12-1 and won the Orange Bowl, but came up short of playing in the Big 12 Championship game. But since then, from Turner Gill to Charlie Weis to David Beaty the program has continued trending in the wrong direction. Beaty believes he’s finally got the scholarship numbers back up and the depth he needs to compete in the Big 12, but barring a minor miracle (4 wins?) then it will be difficult for Long to justify keeping Beaty around after the 2018 season.

Long did say his relationship thus far has been positive with Beaty, adding, “I’ve had good conversations with Coach Beaty. Looking forward to seeing his operation, understanding how he goes about business on the inside and then certainly they’re preparing for their first game on September 1 [against FCS Nicholls State]. We’ll really start to know the progress of the program on September 1 as the season begins.”