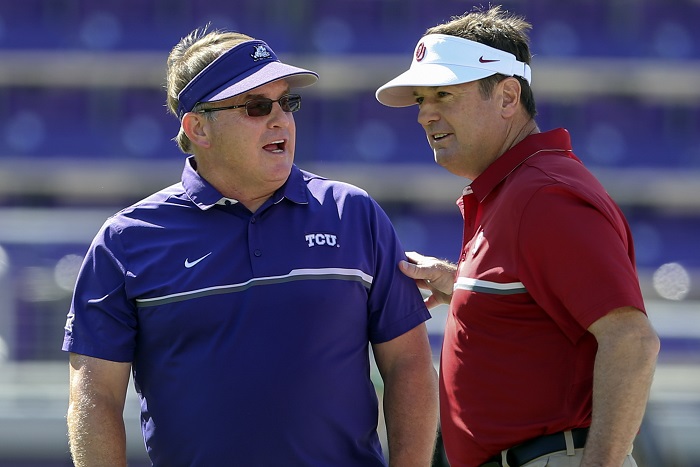 Why the hell not? It’s a Friday in August, and while the season is inching closer, the entire college football world is buzzing about what is going on at Ohio State and wondering whether or not Urban Meyer will keep his job as the head coach. For now, it’s Ryan Day’s job to try and steer the ship in the right direction. But if Meyer does get the ax, it’s highly unlikely day gets the interim tag removed.

As we noted when the news first broke, Campbell is one of the obvious choices. He’s an Ohio native and it’s been widely reported that Campbell would not jump at the first “bigger” job available, but that gigs like Ohio State, Notre Dame and Penn State would always be appealing to the 38-year-old. However, he clearly feels an incredible sense of loyalty to Cyclone Nation. He’s a great coach and mentor and has stuck to his word with AD Jamie Pollard and Iowa State University. But is this just one of those jobs that would be too good to pass up? Quite possibly. Cyclone Nation can hope and pray that Ohio State administrators still believe Campbell might be too green for the job (which, for the record, would be foolish of them).

Surprised by this? Don’t be. He’s already been in charge of turning around a similar mess at Baylor. Sure, he only won one game last season, but he’s instilled an entirely new culture at Baylor that has been recognized not just in college football circles, but in the NFL. Rhule’s name was tossed around for the Indianapolis Colts job this offseason. His blend of college and NFL pedigree is impressive and Rhule gets rave reviews everywhere he goes. If he jumps from one win to a bowl game with Baylor, does Ohio State at least place a call?

The former Ohio State offensive coordinator is only entering Year 2 in Texas, a place he also used to work and has earned a Master’s Degree from. Herman was born in Ohio, but he was raised in California, negating any real ties to The Buckeye State. The money won’t be life changing going from Texas to Ohio State and considering the recruiting class he just brought in and the general feeling that Herman is beginning to put his stamp on the program with “his guys”, going from one blue blood to another doesn’t seem to make much sense. But one thing about Tom Herman, the guy seems to be a total wild card. If this season ends up as another 6-6, 7-5 campaign, and Ohio State is still interested (which I’m not sure why they would be at that point), maybe he jumps.

Stoops has been a hot topic of conversation since he’s a Youngstown guy. I just have a very hard time seeing it. Stoops has stated in previous interviews that he’s now lived more of his life in Oklahoma than Ohio and views himself as truly Sooner Born and Sooner Bred. His two sons have walked on at Oklahoma and will be playing for his protege, Lincoln Riley. He’s a family man who felt it was important enough to retire when he had a Heisman finalist returning at quarterback in order to watch his sons play their senior seasons in high school. How much more dedicated does it get? Rumblings of a one-year, Jim Grobe-style situation, don’t seem to make any sense, as Stoops doesn’t need the money, cache or attention, and the year can in no way improve his already solid resume and reputation. Barring a miracle, this doesn’t make much sense to me.

A “2” felt too high, but a “1” felt too low, hence the 1.5. Had TCU still be in the Mountain West, then maybe this is more of a conversation. But he’s got himself with a Top 25 program that just competed for a Big 12 Championship. The program is recruiting as well as it ever has and it’s well known his wife absolutely loves Fort Worth. Also, Patterson seems to have enjoyed becoming one of the more vocal, if not the most vocal, coach in the Big 12 and a staunch defender of the conference. Unless he is looking for a bigger platform to share his musings, I don’t see Patterson, as he approaches 60 years old, looking to make a move like this right now.