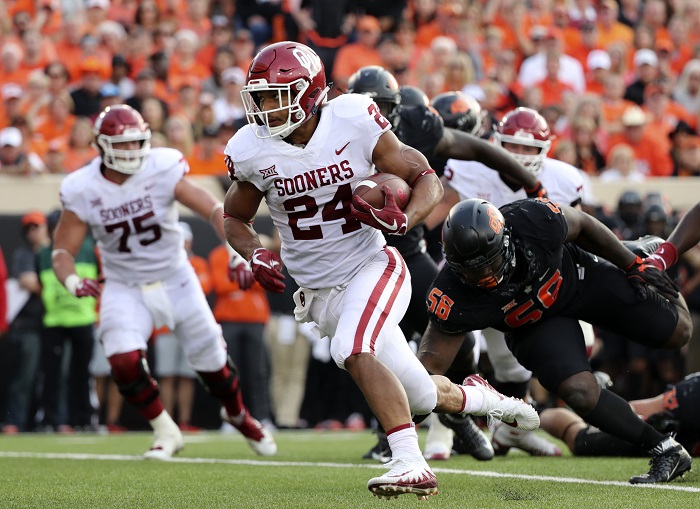 We just need to get through three more Saturdays until we get to our first major college football Saturday (sorry, I’m still not counting those games the last weekend of August, it’s all about the first weekend of September). So, it’s that time of year again to begin our position group rankings in the Big 12 conference. Here are our rankings of the 2018 Big 12 running backs heading into the college football season. Since running backs have become more than about just a featured player in the backfield, these rankings are not simply done by who has the best running back, but rather the running backs on each team, as a group. So please keep that in mind before you start whining. Also, it is impossible for me to make everyone happy with these lists but whether you like or not, here it is in all its glory.

This may be a surprise to the next fan base on my list, but the Sooners have earned the right to claim my top spot on the list. It all starts with Mr. Do Everything, Rodney Anderson. Rodney rushed for 1,186 yards last seasons along with 13 touchdowns. While he wasn’t the go to guy from the start, he was on fire towards the end of the year shredding defenses (Even an SEC defense in the Rose Bowl). Don’t forget Rodney averaged an eye popping 6.2 yards per carry! While having a guy like Rodney Anderson is nice, Trey Sermon rushed for over 750 yards as a true freshman last season. Along with Anderson and Sermon, redshirt freshman Kennedy Brooks and true freshman T.J. Pledger (Top 200 player for 2018 class according to 247) could see some action as well behind a great offensive line.

If Oklahoma is number 1 on this list, consider the Cowboys more of a 1-B rather than a true number 2 on the list. Justice Hill is a freak athlete with some fantastic vision as a runner. The guy is an elite back without a doubt and was one of the best in the country rushing for over 1,500 yards last season. In case you didn’t know, the Cowboys have a stockpile of talent behind Justice. Last season J.D. King rushed for 489 yards and 4 scores and LD Brown showed some flashes at times averaging 6.6 yards per carry. But wait, there’s more. After redshirting last season, Chuba Hubbard comes in with some expectations heading into 2018 after being hyped not only from the fans, but from the man who rocks the mullet himself, Mike Gundy. Chuba was the number one player from Canada out of the 2017 class according to 247.

Ok, the Cyclones at the number 3 spot is interesting. But, just read what I have to say here. As you all know, I call David Montgomery “The Machine”. The dude breaks tackles off like nobody’s business and according to PFF (Pro football focus), he broke the most tackles in the entire country at the running back position. David rushed for 1,198 yards last season and hit the endzone 11 times. Keep in mind, he did this behind a very mediocre offensive line. Now, behind David there are plenty of question marks. Sheldon Croney was the next leading rusher last season with only 164 yards on the ground and Mike Warren has done very little since his big year back in 2015. The good news is that speedster Kene Nwangwu returns after missing 2017 due to an Achilles injury. Now, I know you can say there is nothing behind David Montgomery and that’s true but with David being an elite player, I would trade 3 average backs for an elite back like David. That’s why the Cyclones belong this high.

I had a tough time with these next two spots but in the end, TCU got the nod here. While the Frogs lose Kyle Hicks, Darius Anderson had a breakout party last season with 788 yards on the ground and scoring 8 touchdowns. Don’t forget he got hurt in the tenth game of the season last year and if that didn’t happen, Darius would have rushed for over a thousand yards in 2017. Darius has great vision and speed and fits nicely in the Sonny Cumbie offense. Behind Darius, the Frogs have several different go to options. Number two on the depth chart is Sewo Olonilua who is a big bruising back at 6’3 and 225 pounds. Sewo rushed for 346 yards last season and had 7 touchdowns on the ground. Look for him and Kenedy Snell to see some more touches this season. Also, don’t forget that TCU signed a top 300 overall player out of the 2018 class (According to 247) in running back Fabian Franklin.

The Wildcats are always interesting at running back and you could probably make an argument for them to be put ahead of TCU on this list but keep this in mind. While they have talent at running back, this offense runs the quarterback just as much as a running back which sometimes limits the amount of touches the backs get. Regardless, Alex Barnes is a special player. Alex rushed for 871 yards and 7 scores in 2017 and is clearly the number one back in this run first offense. At 6’1 227 pounds, Alex isn’t an easy guy to bring down and is poised for a thousand-yard season this year. Kansas State also has Dalvin Warmack (261 rushing yards in 2017) and Justin Silmon (233 rushing yards in 2017) coming back as well. It’s also possible that Mike McCoy could see a few carries as well this season.

After being ranked high on the 2017 list, the Mountaineers will surely take a step back after losing Justin Crawford who had back to back thousand-yard rushing seasons from 2016-2017. While Justin is gone, the Mountaineers have some interesting options to work with. I expect scat back Kennedy McKoy to see plenty of touches this season after rushing for over 600 yards a season ago. Whether it’s on the ground or through the air, Kennedy is dangerous. Behind him there are some unknowns in Martell Pettaway and true freshman Alec Sinkfield. According to head coach Dana Holgorsen, there may not be a go to guy like previous years and we will likely see an array of backs in this offense.

I am not going to lie to you, I wasn’t sure if Texas belonged here or not the more I thought about it because this group was bad last season much like he offensive line blocking for them was. In fact, quarterback Sam Ehlinger led the team in rushing yards last season which is not something to brag about. For Texas, Cal grad transfer Tre Watson looks to be the answer at running back. After having a solid 2016 season at Cal, Tre tore his ACL early last season missing almost the entire year. Can he bounce back from the injury? Also, Texas does have some talent behind him that hasn’t panned out quite yet (Stop me if you heard that before). Daniel Young looked like the best back last season for the Longhorns, but he wasn’t much better that Kyle Porter or Toneil Carter. Believe it or not, Daniel led the running backs in rushing yards last season with only 386 yards on the ground. If nobody can step up this season, it’s possible the Longhorns turn to a highly touted true freshman in Keaontay Ingram who was a top 200 player in the country for the class of 2018 according to 247.

While there may not be one clear cut back in this Bears backfield, Baylor appears to have three guys who will all get plenty of touches this season in John Lovett, JaMycal Hasty and Trestan Ebner. Lovett led the team in rushing last season with 479 yards and 5 touchdowns with Hasty and Ebner combining for 468 yards and 3 scores. I guess you could say that John Lovett will be the main back in the offense but at the same time I wouldn’t be surprised if Baylor uses another running back by committee approach and just ride with the hot hand in the backfield. Much like Texas and the teams below this spot, there is no elite back in the offense.

After a couple of transfers at running back, Texas Tech was only left with really only two guys who played last season. Tre King led the team in rushing last season with 633 yards and 5 touchdowns and Demarcus Felton only rushed for 105 yards in 2017. Not a lot there huh? However, it appears that Da’Leon Ward will be back this season after missing the entire 2017 season due to some off the field issues. Da’Leon had a decent freshman year back in 2016 but can he get back to form? There are a lot of “ifs” in this backfield and I wouldn’t be shocked to see freshmen Ta’Zhawn Henry and Sarodorick Thompson see some early action. The good news is that Tech returns all five starters up front which should help some of these guys get their stats up.

Somebody must be last on this list and what a surprise! The Jayhawks are dead last in something. I am sure you can feel the sarcasm in that last line but let’s get back to those running backs at Kansas. Right now, it’s basically Khalil Herbert and everyone else. Khalil rushed for 684 yards and 4 scores last season and about half of those stats came in the West Virginia game. Now, Khalil did play hurt last season due to some hamstring issues that probably cost him some serious yardage. Now fully healthy, can he be the feature back in the offense? Behind Khalil is where things get interesting. Dom Williams and Deron Thompson did not really play a lot or well for that matter, so I wouldn’t be surprised to see Pooka Williams get quite a few touches this season. For those who don’t know, Pooka is a true freshman and was ranked as a top 300 player in the nation for the 2018 class according to 247.