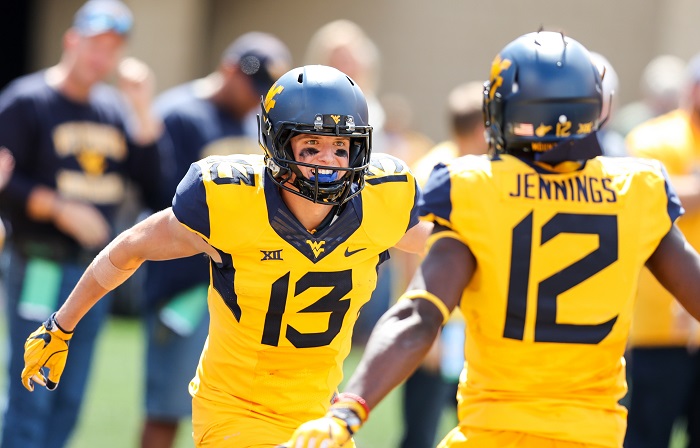 As we gear up for the 2018 season, it’s time to dive head first into the position rankings across the Big 12 Conference. Let’s get into a position that the Big 12 Conference always has a plethora of talent in: wide receiver. It doesn’t appear like the conference has that rock star this year, but in a conference that likes to sling it around, it’s certainly possible someone could step up and be that player by season’s end.

So without further ado, here we go with the Heartland College Sports wide receiver rankings.

Not only do they have the top quarterback in our rankings, but the Mountaineers have the pleasure of also sitting at the top of our wide receiver rankings. Gary Jennings and David Sills will lead the way as seniors, but there is someone who could steal their thunder by season’s end and he’s Alabama transfer T.J. Simmons. The former 4-star receiver was the 5th-ranked player in the state of Alabama in the Class of 2016. Then, there’s Marcus Simms who will be a sneaky good deep threat. Dana Holgorsen and Jake Spavital will have a ton of talent at their disposal this season.

Baylor actually has a lot of experience coming back at this position. Denzel Mims emerged as the go-to guy and finds himself returning as one of the most productive wide receivers in the conference. He finished last season with 1,087 yards and eight touchdowns on his way to second-team All-Big 12 honors. Then there’s Chris Platt, Gavin Holmes, Pooh Stricklin and R.J. Sneed all returning from injuries. They all flashed enormous potential before going down with injury. And let’s not forget about Tennessee transfer Jalen Hurd, the former running back who rushed for over 2,600 yards in the SEC. Plus, don’t overlook four-star early enrollee Tyquan Thornton, who can absolutely fly with a 10.50 second 100 in the meters and a 21.07 in the 200. Woosh. The options are aplenty for Matt Rhule and Charlie Brewer.

In terms of pure excitement, I’m not sure it gets much better than Marquise “Hollywood” Brown. The last we saw of Brown he had eight catches for 114 yards against Georgia in the semifinals. At only 5’10”, 160 pounds, Brown is not going to beat you for a jump ball, but we can leave that up to Cee Dee Lamb. A.D. Miller, Nick Basquine, Mykel Jones and Lee Morris provide nice depth for Kyler Murray. And also, can one of the new faces step up? Charleston Rambo (what a name!) was a former four-star recruit from Cedar Hills, TX who redshirted last season. Other true freshman coming in are four-star players such as Jaylon Robinson and Jaqualyn Crawford.

Gone are James Washington, Marcell Ateman and Chris Lacy. But as is typical in Stillwater, there is no shortage of talent coming back and ready to take the reins. Jalen McClesky leads the group with 152 career catches. LSU transfer Tyron Johnson never really found a place for himself last season, but he’s poised for a much bigger role this season. Dillon Stoner exceeded expectations last season as a freshman and then there are up an comers like Tylan Wallace and LC Greenwood who should have a bigger role. And expect true freshman C.J. Moore, who is 6’5” and was a four-star receiver ranked as the 5th-best player in Oklahoma, to step in and play.

Talk about another good 1-2 punch in Fort Worth. KaVontae Turpin brings the incredible speed and Jalen Reagor brings the skill and size on the outside. Don’t be shocked if Reagor ends the season as the best player at this position in the conference, it just hinges on if he has someone reliable to get him the ball. After these two, there’s Jaelen Austin and Jarrison Stewar. Also, true freshman Tevailance Hunt could find himself playing time as well.

There is a lot of size and talent in this group. Allen Lazard is gone, along with Marchie Murdock and Trever Ryen, but 6’6” junior Hakeem Butler has the ability to step into that role as the No. 1 wide receiver. The former two-sport star in high school has blossomed into one of the most talented receivers in the conference. Senior Matthew Eaton racked up 21 receptions for 208 yards and four touchdowns. Junior DeShaunte Jones saw a dip in production last season, going from 37 receptions in 2016 to 28 last season, but he can be a great No. 3 for this program. This season is also a chance for Jalen Martin to get an increased roll in the offense as well. Sean Shaw Jr. is an intriguing prospect to watch. At 6’6”, he was the 7th-best prospect in the state of Oklahoma and was a three-year starter with over 200 career catches.

This unit is defined by one word: potential. Collin Johnson and Lil’Jordan Humphrey are 6’6” and 6’4”, respectively, and could be first-team All-Big 12 players, but they need to be much more consistent than they were last season. After these two, there is Jerrod Heard in the slot, along with John Burt and Devin Duvernay, who have increased expectations. Texas also brought in a pair of four-star wide receivers in the Class of 2018 in Brennan Eagles (6’4”, 215) and Joshua Moore (6’1”, 170). Both were considered top-20 wide receivers in the country.

The Red Raiders are losing a ton of talent at this position. Texas Tech will lose 70 percent of its production from 2017 with the departures of Keke Coutee, Dylan Cantrell and other seniors. T.J. Vasher has to be a player that steps up into the lead role. The former four-star recruit came on as last season progressed, with each of his five starts coming in the final four games of the regular season as well as the Birmingham Bowl. He finished third on the team with 545 receiving yards and six touchdowns. The second-most experienced receiver is Antoine Wesley, who had 10 catches last season. Maybe Ja’Deion High steps up in his senior season, but he’s dealt with several injuries as well. Two of Tech’s top recruits in the Class of 2018 were Erik Ezukanma and Corey Fulcher. Expect to see their names sooner than later.

I know it’s often easy to goof on Kansas, but the Jayhawks are not last in this position ranking. If Steven Sims was playing anywhere else in the Big 12, he’d be getting much more attention. He had 59 catches for 839 yards and six touchdowns on an anemic offense. Alabama transfer Daylon Charlot is going back to his original position of wide receiver, and then there’s slot man Quan Hampton who had his moments last fall. Evan Fairs provides some depth as well.

After the surprising departure of Byron Pringle to the NFL, this unit has a lot of question marks. Isaiah Zuber and Dalton Schoen are nice players, but can they be the No. 1 at a Power 5 program, or at least at one that wants to compete near the top of the Big 12? I’m not convinced. Isaiah Harris, Zach Reuter Landry Weber and others will get some cracks. Chabastin Taylor was a rock star at the spring game, but it was the spring game. New offensive coordinator Andre Coleman has his hands full trying to figure out how to best utilize the passing game. Can K-State somehow get around the redshirt transfer rule and get Michigan State transfer Hunter Rison on the field this fall?