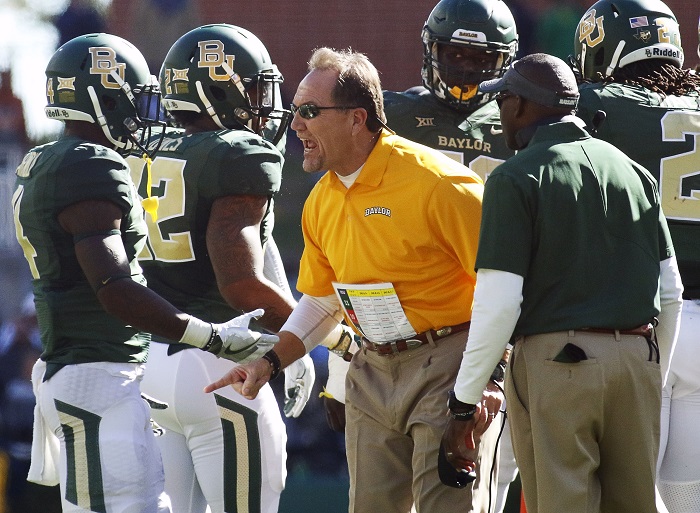 In new audio provided to KWTX in Waco, former Baylor coaches can be heard yelling profanities at Baylor regents following a story that was released in the Wall Street Journal in the fall of 2016 regarding the Art Briles situation and the sexual assault scandal that engulfed the university that year.

The audio came to light in part because of a filing this week by Art Briles’ lawyers in a response to a motion filed by a former Baylor student who claims she was physically assaulted by a football player.

The article from the WSJ came down right before Baylor played the University of Texas, when the Bears were undefeated at the time. In the article, regents made statements including a claim that 17 women reported sexual or domestic assaults involving 19 players, including four alleged gang rapes.

The most vocal of the bunch appeared to be then defensive coordinator Phil Bennett, who was quoted as saying, “There comes a point we’re going to fire back! “We’re tired of this s***! “You can only eat s*** for so long. This board turned on us.”

There appeared to be a lot of blame placed by the coaches on Pepper Hamilton, the company that was put in charge of investigating the allegations at Baylor. “Our regents are the ones doing the discussing,” one coach said. “The PR firm got the Wall Street journal to do it!”

That led to allegations of racism by the staff of Pepper Hamilton. Bennett, again the most vocal and animated of the bunch, said, “When are they going to be exposed? I will make it my life goal to get those bastards! I said it, they’re racists. I am the one, and I’ll tell everybody, I am the one they f****** asked why do we have so many blacks. And the reason they don’t let you record it. They want to f****** put their own spin on it.”

“I was asked about blacks, too,” said another coach.

The back and forth continued throughout the meeting between new athletic director Mack Rhoads and the staff with expletives and heated conversations. Baylor released a statement on the report, simply saying, “Our focus is not on the events of two years ago, but on supporting Coach Matt Rhule and the 2018 Baylor football team.”